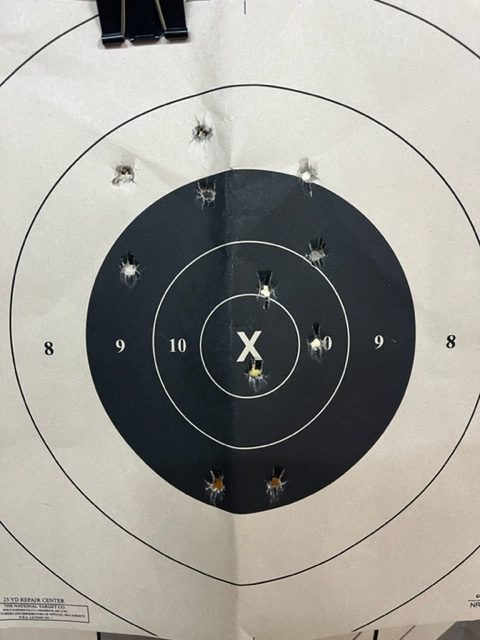 Considering the frequency and severity of recent active killer attacks,  I decided to work on some long range pistol shooting drills for last week’s shooting session.

I started my session with Chuck Pressberg‘s “No Fail Pistol Drill.”  You can read more about the drill at No Fail Shot Drill | Pistol Power Drills. The drill is simple, but not easy.

-Draw and fire one shot at the target in under 3.5 seconds

– If all of your shots are in the black, you pass.  If any shot is outside the nine-ring, you fail.

That’s it.  Ten shots at 25 yards.  There are a couple other scoring tweaks you should definitely understand, but nothing that seriously compromises the integrity of the drill l described above.   I run the drill cold a few times a year.  Last week, I decided to shoot it as my warmup training drill.

I was shooting on an indoor range that prohibited drawing from the holster.  I shaved a half second off the goal time and shot each shot from the low ready position in under three seconds with my primary carry Glock 19.  The results are below.

With stock Glock 19 and 124 grain FMJ ammo. You’ll note 11 holes. I’ll let you decide if I either can’t count or I’m just an overachiever.

I failed.  I don’t care.  I fail this one almost every time I shoot it.  The standards are tough.  I’m not that good.  It’s still a valuable effort.

I’m really OK with that target.  Even though it’s a fail, having eight out of ten shots in the black at 25 yards from single presentations, is way better shooting than most folks can do cold, on demand, and without a warm up.

If you look at my articles tagged “shooting drills”, you’ll see that I fail almost half the tests I attempt.  You don’t learn anything new if you can already pass the test.  Seek out the drills you know you can’t beat.  Then try to beat it.  Later in the article, I’ll share a way to create a linear progression of practice sessions that will move you closer to a passing score.

But before I do that, I want to tell you that immediately after shooting my Glock, I tried the same drill with my Ruger LCP II in .22 long rifle.  I shot it from low ready with the same three-second standard as I had previously fired my Glock.  The target is below. 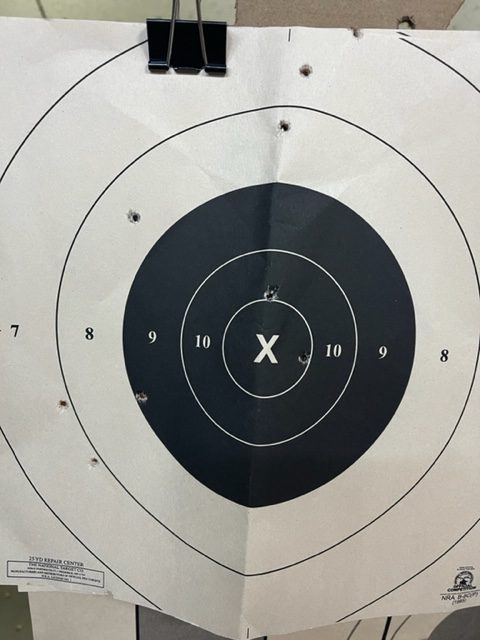 Only three (instead of eight) in the black.  Six more in the scoring rings, and one just outside the rings a bit high.  With the Velocitor loads, my LCP shoots high at 25 yards.  My aiming point was at the bottom of the black.  Interestingly enough, with my Glock and 124 grain ammo, I have to hold at the upper edge of the black to hit at 25 yards.  It pays to know your pistol.

If I casually analyze the target, I feel good about my performance.  Certainly putting all the rounds into a chest-sized target at 25 yards with a .22 pocket pistol is pretty decent shooting for the average gun owner.

Make a more detailed comparison.  Yes, I can put all my .22 rounds into someone’s chest at 25 yards with a generous time limit.  But I like to look at at from a different perspective.  Compare the total points for my Glock performance with my performance using the little Ruger.

That means with my little gun, I’m only 73% as effective as with my Glock 19.  Karl Rehn has data that shows the difference in scores between a full sized weapon and a pocket gun shot on the same stage are even more exaggerated among lesser-skilled shooters.  Are you sure you want to carry that pocket gun today?

Some of you who rank “barely adequate” with a full sized pistol, will drop to “woefully insufficient” with a pocket pistol.

If you are like me and usually don’t “pass,” this is the progression I would suggest for getting better:

Place the target at 10 feet. Fire 10 consecutive shots with no time limit.  When you can put them all in the 10 ring, move on.

Place the target at 10 feet.  Fire the drill with the stated time limits.If all shots are in 10-ring, move on.

Place the target at 20 feet.  Fire the drill with the stated time limits. If all shots are in 10-ring, move on.

Place the target at 30 feet.  Fire the drill with the stated time limits. If all shots are in nine-ring, move on.

For each additional level, complete the task after adding an additional 10 feet of distance until the target reaches 25 yards.

This is an easy progression that will really improve your shooting.  Try the “no fail” drill.  If you fail (like I did), you have more work to do.