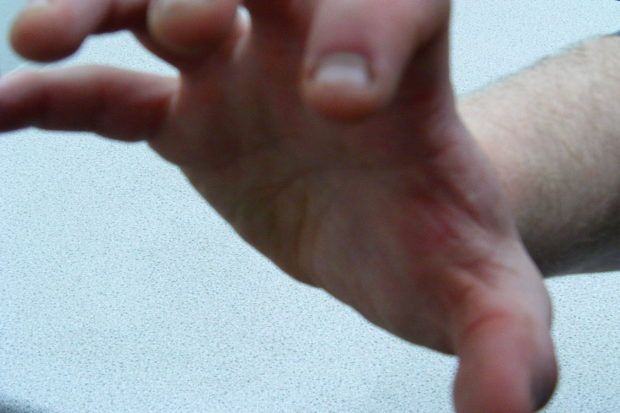 At last weekend’s Rangemaster Tactical Conference, I heard three different presenters mention the same problem frequently seen in their female self defense students.  All three mentioned that their students are “too nice.”  In the interest of social conformity or in the attempt to be polite, women often endure situations that could have been avoided if they weren’t so afraid to speak up or even to be “rude” to strangers who are attempting to victimize them.

The parking lot lot was fairly busy, with lots of cars and a bunch of people walking around.   As I got out of my car, I saw a really strange looking guy approaching random women in the parking lot.  He was a white male in his mid 40’s.   Long hair.  Bandanna on his head.  Tie-dyed shirt.  Too-tight khaki shorts.  Socks pulled up over his knees…..a weird dude.  His generally strange appearance caused me to watch him fairly closely.

Walking up to the post office, I see that the odd looking man is attempting to thread his belt through the loops at the rear of his shorts.  He’s asking every woman he sees for help putting on his belt.  I initially thought he was mentally disabled, but as I neared, I noticed his very clear, intelligent speech patterns and a lack of any physical infirmities.  He didn’t need any help.  He was trying to get women to touch his ass!

The most disturbing thing was that all of the women were complying with his requests!  One middle-aged lady was clearly uncomfortable.  He was begging her to help him with his belt.   She was trying to help him as he “guided” her hand all over his rear end.  She looked mortified, but didn’t say or do anything to stop the man.

Then this strange little man noticed me walking past and seemed scared.  He said: “Thank you, I got it!” and scampered off.  The woman was visibly relieved and thanked me for being there as we walked into the post office.

I mailed my packages and walked out. Guess who was there?  Tie-dye man was accosting another woman.  He was physically blocking a college-aged girl from getting into her car by using the same scheme….“Help me with my belt. I need some help threading it through the loops back here.”  This girl was trying to ignore him and get into her car, but he wouldn’t let her.  She was terrified.

To my surprise, rather than fighting, screaming, or calling the police, she started helping him with his belt!  He grabbed her hand and rubbed it up and down his ass.

I couldn’t take it.  I walked up to the guy, pulled the woman’s hand out of his and told him to leave.  I also told him that I would have him arrested if I ever saw him in the parking lot again.  The freak sheepishly apologized and walked away.  I haven’t seen him since.

It got me thinking about a few things…..

Did I make the right move by confronting him?  I was out of my jurisdiction, didn’t have any arrest power, radio communications, or backup.  From a legal and “officer safety” standpoint, I did everything wrong.  But I’m glad I did it.  Those women being victimized were even more glad.

Sometimes we cops get bogged down in too many procedural “what-if” questions.  Sometimes those questions cause us to hesitate when we really just need to act.  We need to do what’s right and damn the consequences.  To all my police friends, I want to reiterate the legendary motto of a famed group of Russian spec- war soldiers: “If not me, then who?”  If you won’t do it, who will?

It also got me thinking about those women in that parking lot.  None of them wanted to touch that freak’s ass.  All of them were clearly scared and disturbed.  Yet none of them did A SINGLE THING to avoid the situation.  They could have just walked away from him, they could have told him to back off, they could have yelled for help, THEY COULD HAVE KICKED THE GUY’S ASS!  They didn’t do any of that.  They just meekly complied.  I don’t think they wanted to be considered “rude” or “mean”.   It’s disappointing….

Listen, ladies.  You don’t have to be nice to people who are clearly trying to victimize you!  You don’t have to help every stranger who asks for your assistance. It’s OK to be mean!  Wake up.  Get off your cell phones and take a look at what’s going on around you when you are out in public.  If you are confronted by a criminal, respond quickly and decisively. You have my permission.  I don’t care what you do…hit the guy, run away, scream for help.  JUST DO SOMETHING!  Don’t meekly enable your own victimization.

There were dozens of other people, both male and female, that saw the same thing I did.  Not one of them did anything to stop it.  It pisses me off.  I hope that when my readers see something like this happening, they have the courage to intervene.  Wouldn’t you want someone, even a stranger, to intervene if your wife, daughter, sister, or mother was being molested?  Then be that stranger who intervenes!  When did being a hero become something negative?  Besides, it’s just the right thing to do.  As soon as our society stops acting so cowardly, people like my strange little friend in the parking lot will disappear.

I can’t change society.  What I can do is provide some educational resources that might make my readers change their own actions and reduce their risks.  I don’t know what I can do to help women become more assertive in situations like this except encourage you all to ask some questions…

Ladies, what would you do if a man grabbed your hand and used it to massage his butt?

What would you do if you saw this happening?

How could you prevent it?

Think those questions over.  Come up with a plan of action.  And ladies, if you are waiting for someone to give you permission to stand up for yourselves when you are feeling threatened, permission is granted!  Be mean. Be rude.  Refuse to be helpful if your safety is at risk.

And more importantly, encourage the women you love to do the same.

Every once in a while, I get the question: “What elements of your instruction have changed over the years? Is there any advice that you once believed, but you now think is incorrect?

It’s a good question to ask your instructor. If your teacher is teaching the exact same lesson plan he used 10 years ago, your instructor hasn’t done any work to better himself.

Here’s an example of a change for me. I wrote this article in 2012. The incident happened a few years before that.

My advice to the ladies who were victimized hasn’t changed. Today, I would not have intervened. And I do not encourage my students to intervene in situations like this.