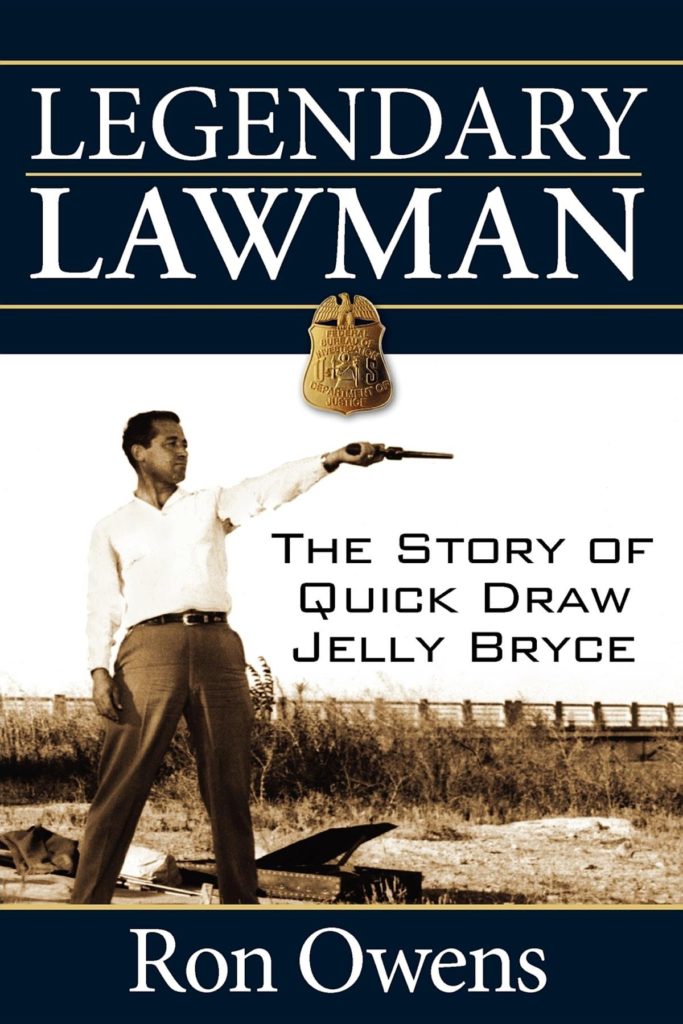 Delf “Jelly” Bryce was an old time gunfighter who started his career as a lawman in the 1920’s.  He served as a Oklahoma State Game Agent, Oklahoma City Police Officer, and later an FBI agent in the agency’s heyday fighting gangsters and alcohol smugglers. He received the nickname “Jelly” after a criminal he shot called him a “jellybean”.  Jellybean was a slang term at the time for a fashionably-dressed man.

From the time that he was young, Delf had an incredible aptitude for shooting.  When he was a teen he worked all summer shining shoes just so he could save up $100 to buy more ammunition.  $100 bought a lot of shells in the 1920s.

His practice paid off.  Winning a shooting match as a State Game Ranger impressed the assistant chief of the Oklahoma City PD and led to his commission as a city policeman in 1928.  He worked there six years and later became an FBI agent, hired again for his skill with a gun.  The FBI at the time was dealing with the incredible challenge of reigning in criminal gangsters during the Great Depression.  After losing four agents in a single year, J. Edgar Hoover waived the college degree requirement for entry in the case of applicants with previous police gunfighting experience.  Delf Bryce was hired under these new relaxed standards.

Although few modern-day students of gunfighting have ever heard of Jelly Bryce, his gunfighting exploits are considered legendary by historians of the combative arts.  This book provides a background on Bryce’s life and recounts the details of many of his gunfights.  To provide a taste of what the book chronicles, here are some of the gunfights described within:

– His first gunfight at age 22 when he was attempting to arrest a car thief.  The thief went for a gun and Jelly shot first, hitting him in the arm.

– His second gunfight which occurred shortly thereafter when he jumped on the running board of a moving car to rescue another officer who was fighting with three criminals inside the car.  Jelly shot two of the three.  His bullets likely killed both.

– A shooting where Jelly wounded an armed store owner he mistook for a burglar.

-A car chase over 15 miles during which time Jelly fired more than 60 rounds at some criminals who were fleeing as they threw lit sticks of dynamite at the pursuing officers.

– Another car chase where Jelly shot dozens of rounds at the fleeing vehicle, striking it 37 times before it was disabled.

– A gunfight with a barricaded fugitive bank robber who was shooting at officers from the bedroom of a house with a Luger pistol in each hand.  Jelly (armed with a Thompson Machine Gun) and 12 other agents fired more than 1000 rounds into the house, striking the criminal 13 times.

-Jelly’s most famous gunfight in the Wren Hotel when he was attempting to arrest a fugitive gangster.  When he opened the hotel room door, Jelly saw the fugitive laying on the floor pointing a pistol at him..  Jelly quickly sidestepped, drew his .44 spl S&W revolver and fired five times before the criminal could pull the trigger.  He hit the man in the head with four out of the five shots.

All in all, Jelly admitted to a friend that he had killed 19 men.  The majority of those gunfights happened when he was with OCPD and in his early days as an FBI agent.  Unfortunately, we’ll never know about many of his exploits as 469 pages of his FBI personnel file (mostly covering his early adventures) had inexplicably been removed or destroyed.

Most of the latter half of the book describes Jelly’s later years as the Special Agent in Charge (SAC) of four different FBI offices.  In that role, Jelly spent about half of his time doing public speaking and marksmanship exhibitions.  He was known across the country for his trick shooting exploits and was once featured in Life Magazine as a stroboscopic camera caught him drawing his pistol from concealment and firing in 4/10 of a second.

The book detailed many more of Jelly’s remarkable shooting feats, but a draw from concealment in under half of a second is something that will likely never be done again.  Jelly Bryce was one of the best shooters and gunfighters who ever lived.  This book is the authoritative chronicle of his life.  If you have any interest in gunfighting history, it’s a must read.

* Some of the above links are affiliate links.  That means that if you purchase these items, I get a small percentage of the selling price.
Liked it? Take a second to support Greg on Patreon!