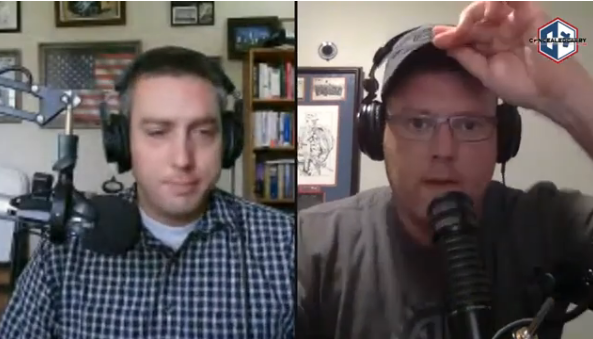 I was listening to the Concealed Carry Podcast recently and their episode Phrases and Commands You Should Rehearse and Memorize got me thinking.

The description frames the issue under consideration well.

“Jacob and Bryan get together to talk through the importance of having a handful of key phrase or commands that you consider in advance, rehearse as part of your training, and utilize in various situations.”

I think John Farnam was one of the first people to advocate this tactic.  He calls them “tape loops.”  Check out the video below for his explanation of the logic behind “tape loops.”

At one time I heartily embraced this idea…until I found something better.

I started out as a cop nearly 30 years ago.  I was a naive kid who had just graduated college.  I had zero experience dealing with criminals.  I had no idea what to say to them, so I learned some “tape loops.”

They worked a lot of the time.  But they failed miserably against the truly manipulative psychopaths.  Those psychopaths who were verbally adept would just ignore the tape loops and continue with their manipulative verbal banter.  The “tape loops” worked best on the criminals who weren’t very smart, very dedicated, or very manipulative.

Despite their occasional failure, I persisted using my “tape loops” for many years.  Two things changed over time.  The first is that through a whole lot of training, my confidence increased.  After years of martial arts training combined with 4000+ hours of instructor level gun and combative training, I simply wasn’t scared of most criminals anymore.  They didn’t intimidate me, so I could talk to them in a normal manner just like I could talk to a citizen wanting a report.

I also started studying social dynamics and psychology to improve my verbal interactions.  With classes, practice, and some NLP hypnosis, I learned to be more socially adept.  I learned how to talk to people in a more dynamic and convincing manner.  That helped immeasurably.

Now I don’t use the “tape loops.”  I just talk.  The same way I would talk to you in the line at the grocery store.  Communication with criminals really isn’t any different than communicating with anyone else when you have the confidence to deal with a physical assault and the verbal agility to deftly handle their manipulative language.

I’ve come to regard “tape loops” as “verbal training wheels.”  Having a rehearsed set of phrases is certainly better than being intimidated while bumbling and stumbling over your words.  “Tape loops” are a good first step for a person who hasn’t spent much time dealing with manipulative criminals.  They are good for people who become scared and who aren’t very verbally adept.

Some of my students will always be fearful and lack the social agility to become more verbally adept.  For those folks, I heartily embrace the “tape loop.”

But understand that these loops don’t always work.  I think it’s best to develop the social agility to roll with the punches and provide your own banter right back.  That show true confidence and a lack of intimidation.

Sometimes the tape loops will allow you to bluster through your fear and may work on a lot of low level criminals, but true mastery involves transcending them.

Study social dynamics and persuasion.  Join Toastmasters or take a public speaking course.  Do some improv comedy/theater classes  All of these routes will improve your verbal agility.

It’s a bit unconventional, but I also suggest that you study the “pick up artists” and the art of seduction.  Seducing a romantic interest involves poise, confidence, social intelligence, banter, teasing, and persuasion skills.  Those are the same abilities  that you need to deftly deal with a potential criminal attacker.  You might be very surprised to note that many of the best trainers in the firearms business have taken classes from the top “pick up artists” in the game to improve their social fluidity.

“Tape loops” are a great first step.  But understand that there are far better options available if you are willing to do some work and put in the hours studying social literacy.