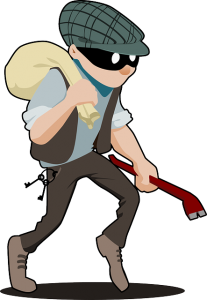 With  the weather getting nicer, we’ve seen our annual spring increase in both car and house break-ins.   The city where I work has been hit hard.  While most residents think it’s mischievous teens stealing from cars, that really isn’t the case anymore.  20 years ago, almost all car break-ins were kids looking for pocket change or something they could quickly sell.  Now it’s almost 100% heroin addicts who are breaking into cars.  We catch these thieves on a regular basis and I can’t remember the last one I’ve dealt with that wasn’t hooked on heroin.

I’ve kept track of reports of the thefts from cars in the city where I work  (an upper-class suburb with around 35,000 residents) for the last 30 days.  While I earlier referred to them as “car break-ins” that is truly a mischaracterization.  Here’s how the numbers work out:

More than 83% of the vehicles with items stolen were unlocked!  In only three cases did thieves actually break a window to steal something.  In each of those cases, the item(s) stolen were expensive and clearly within view from the outside of the vehicle.  You can safely assume that if there is nothing visible to steal in your car, thieves won’t break windows just to check.  On the other hand, if you leave your doors unlocked, thieves will open the door and see what they can find.  As the title of the article says: Lock your damn doors!  If you don’t want your crap stolen, keep your doors locked and valuables out of sight.

This should be common sense, but for 24 of our residents last month, it wasn’t.  Want to see how a thief operates?  Check out this surveillance video from a friend.  He has cameras trained on his vehicles in the driveway and on the street.  Here is footage of a thief checking his car doors.  Take note that the thief, in his quest to look “casual” barely even looks inside.  He’s just checking for unlocked doors.  If he finds one, he’ll look for valuables from the inside.

The thieves go straight to the master bedroom and steal jewelry and all the small electronics they can gather on the way.  They are in and out of the house in only a few minutes.  One of our residents came home to find one of the thieves in his house.  He had been gone only a few minutes and left the front door unlocked.  The female thief told him a story about being sick and needing to use the restroom immediately.  She apologized and told him she couldn’t wait and didn’t have time to knock on any other doors to ask permission.  The homeowner checked her to make sure she didn’t have any stolen property and then let her go.  He called us about 20 minutes after she left, wondering if he had done the right thing.

Fortunately, one of our detectives recognized this M.O. from a previous investigation.  Sure enough, it was the same girl.  The girl now has a felony burglary warrant out for her arrest and soon will be in jail.  Lock your damn doors!

I responded to one other noteworthy burglary last month.  This one was also a house burglary where thieves entered through an unlocked door.  The two thieves got away with more than $40,000 worth of jewelry.  Nothing else was taken.

The homeowner didn’t lock her door because she had two very large and aggressive dogs in the house.  She didn’t think any burglars would take the chance of being bitten by the dogs and wouldn’t dare open the door.  Normally, that has been a correct assumption in my experience.  I’ve never responded to a burglary in a house who had a large dog…until two weeks ago.

I previously wrote about the problems with making the assumption that your are “safe” just because you have a large dog.  I wrote about how the formal research really doesn’t support that conclusion.  Now I’ve experienced that first hand.  These big aggressive dogs didn’t deter the thieves for a minute.  Don’t rely on your pets to protect you.  Lock your damn doors!