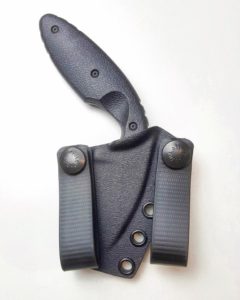 Jon Hauptman from PHLster sent me one of his newly designed “Fightworthy” sheaths for the Ka-Bar TDI knife.  The TDI is a very popular little fixed blade centerline carry knife designed by my friend John Benner at Tactical Defense Institute.  The TDI is great for its intended use, the only complaints I regularly get from students aren’t about the knife, but instead about the factory sheath.  Most serious users end up buying an aftermarket sheath for enhanced comfort and concealment.

I bought a copy of PHLster’s previous generation of TDI sheath, but I rarely carry it.  The sheath was extremely well made and secure, but it seemed optimized for a reverse grip draw when I generally use the TDI knife in a forward grip.  The new sheath is an incredible improvement over the previous design.

I’ve been carrying the sheath for about a month and really like it.  I wore it while teaching TDI’s Extreme Close Quarters class a couple weeks ago and have generally been giving it a hard workout.  It is exceeding my expectations. 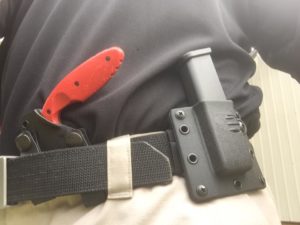 I like that the sheath is secure with both the actual TDI knife and the (now sadly unavailable) TDI trainer.  Many sheaths won’t work with both.  The new design has a lot of features that make it more durable.  Here is how PHLster describes the differences between this sheath and the previous generation.

Redesigning a product as beloved and well known as our TDI Fightworthy Sheath was no small task. Known for its versatility, clean design, and tenacious retention, our sheath found its way on to the belts of many LEO’s and civilians alike, concealed behind mag pouches and radios, or under a t-shirt.

Using advancements in molding, we’ve been able to improve the fit, feel and function of the sheath.

Previously, the tightness of the sheath was the result of the sheath material aggressively formed around some of the hard 90 degree angles of the steel blade. While this provided very robust security, it could also lead to some wear and tear on the sheath, as well as a frustrating experience for some users. With more precise molding and forming, we have overcome that by molding in specifically tuned internal features of the sheath to create crisp, predictable, and uniform retention without sacrificing security.

We’ve also modified the eyelet spacing and profile of the sheath, allowing for improved access for large or gloved hands and increased compatibility with a wider selection of aftermarket belt attachment options.

Check out the company’s video discussing the sheath’s features:

The new sheath is available at the PHL-ster website.  If you carry a TDI knife, you owe it to yourself to check it out.  It’s one of the best designed aftermarket sheaths on the market.

FTC disclosure: PHLster provided a pre-production copy of the sheath free of charge for evaluation purposes.  My receipt of this sample was not contingent on supplying this review.  I have no financial interest in this product, have not been paid for the review, and receive no commission on products sold through the PHLster website.