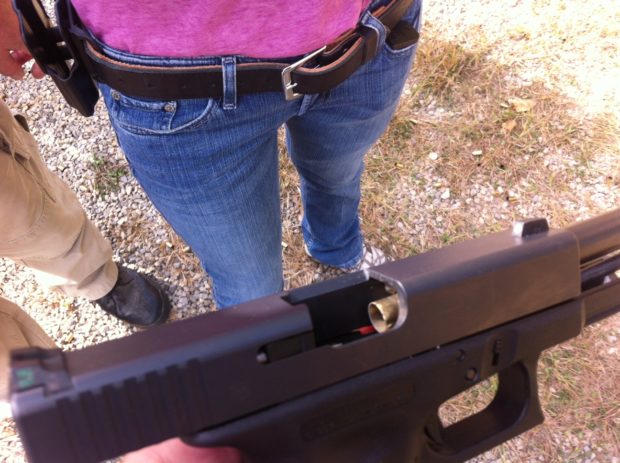 Last weekend I was hosted by Ohio Shooting Sports to teach my one-day Extreme Close Quarters Shooting class.  I had a great class filled with 17 very motivated students and everyone seemed to learn quite a bit.

Here are a couple of significant learning points I can share from watching 17 people shoot and fight all day:

1) Most people overestimate their skill levels.  I require some formal training beyond a CCW class as a prerequisite for the class.  Students should be able to competently draw from concealment, reload their weapon under stress, and clear malfunctions reflexively before I’ll accept them into this particular training class.  Even though everyone stated that they could perform these tasks and had taken some formal training classes, the overall skill level was not quite up to par.

Please don’t delude yourself.  Just because you have shot a gun since you were five years old does not mean you are well trained.  I had a few students who struggled with basic weapons manipulations, malfunction clearance, and even basic operation of their handguns.  That significantly slowed the progression of the class.  Make an honest assessment of your skill levels.  If you can’t do the things demanded as prerequisites for any instructor’s class, don’t sign up until you can!  If you can’t make a headshot at three yards with no time pressure, perhaps an advanced course isn’t really what you need.

2) Test your carry gear BEFORE you take a class like this.  I had a few students who had significant problems with holsters, mag pouches, and speedloaders.  It’s best to figure out these issues before any class you might take so that you don’t struggle and waste your money.  Holsters with abnormally high “sweat guards” were a problem.  If you have a kydex/leather hybrid IWB holster, make sure the leather sweat guard doesn’t stick up too high.  If it does, your draw will be screwed up when you grab both the holster and the gun when going for the pistol.  That sweat guard will also get “floppy” after significant carry.  The floppy sweat guard will block your holster opening, causing difficulty with reholstering.

If you are using a revolver, check to make sure that your speedloaders will still function if you are using aftermarket grips.  Many grip panels need to be trimmed to allow speedloader use.  One other tip: full wadcutter bullets make speedloader use incredibly difficult.  If you want to actually enjoy your training class, using a round nose, or semi-wadcutter practice round will make your life much easier.

3) Glocks will function when dry, but they won’t function when dry AND you have a poor grip.  I had one student who was fighting her Glock 19 for the entire class.  She ended up having one of the most unique malfunctions I have ever seen.  Check out the picture below: 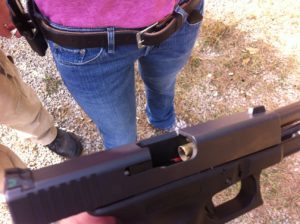 Her gun was bone dry.  It still functioned fine when she shot at full extension, but when she shot with a weak one handed grip from retention, it would malfunction on almost every round fired.  When she shot my (properly lubricated) Glock 19 from retention she didn’t have any problems.  It seemed to be the perfect storm combination of weak grip and an unlubricated gun that caused all her malfunctions.  Lube your guns and work on your grip strength!

The other students’ guns ran great.  Probably 80% of the class was using a Glock of some sort.  There was one 3″ Kimber 1911, a Rossi .38 revolver, a S&W Shield, and a Springfield Armory XD.  All of these guns (even the 1911) ran fine and only malfunctioned due to operator error.

4) The primary operator error leading to malfunctions in close quarter shooting is “floating” the gun forward out of the retention position.  In a high, tight retention position, the gun is anchored to the body and the slide will move back and forth unimpeded.  When the gun starts moving forward out of the thumb/pectoral index, the slide inevitably hits the student in the chest and causes a malfunction.  It was the most common shooting error I saw throughout the day.

5) Carrying the gun in the “small of the back” or at 6 O’clock is a mistake.  The draw is just too awkward to pull off under any stress.  It’s difficult to clear cover garments, the draw is exceptionally easy to foul, and it’s extremely difficult to retain the weapon in a gun grab attempt.  In addition, most people muzzle everyone behind the firing line when drawing or re-holstering.  This holster position is a really bad idea.  Move the gun closer to 4 O’clock or carry it in the appendix position.  You will be much happier, trust me.

Thanks again to all the students who came out for my class!  I hope to see you in additional training classes in the years to come!