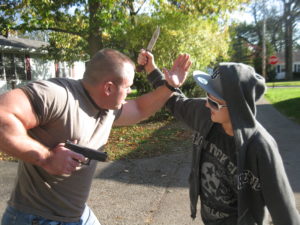 You all really seem to like it when I post information about the gun and gear problems I see in class.  I could write a 3,000 word article filled with high level tactical insight and it will be virtually ignored.  But if I talk about how a certain gun is a piece of crap, the article goes viral.  I don’t really understand it, but that’s reality.

For some reason, guns and gear are exciting.  Tactics and skills are not.  Even though this fact continually disappoints me, I recognize that I am not going to change the culture of the shooting world.  A lot of you think that a professional’s thoughts on carry gear is a valuable topic.  It’s not my favorite topic to write about, but I’ll indulge in the lunacy if it better guides my readers through the gun industry quagmire and steers folks to some optimal equipment selections.

The good thing about being a professional firearms instructor is that in one weekend I see more rounds fired through more different types of guns than the average recreational shooter sees fired in his lifetime.  I see bunches of guns.  I see them shot in difficult conditions.  My classes don’t look anything like backyard plinking at aluminum cans.  I see guns fired in the difficult and stress-filled drills I create for my students.  Teaching classes almost 30 weekends every year, I get to see a lot of guns.  Some do well.  Some don’t.

I taught TDI’s extreme close quarters class last weekend.  The class is more about fighting than it is about shooting.  But with that said, the 25 students in the class probably fired between 400 and 500 rounds each over the weekend.  The students fired most of those shots from the single handed retention shooting position (see picture above).

Here’s what I noticed:

Observation #1– Please understand that normally reliable guns will occasionally shit the bed when fired from a retention position.

I noticed this was especially true with a Glock 43 and a couple of Walther PPQ pistols in class. I also saw the same issue with a S&W Shield (although with less frequency).  The guns were completely reliable when shot with two hands. They had all kinds of feeding problems in anything but the most stable thumb/pectoral index shooting position from retention.

Some pistol models seem to be significantly more prone to malfunctioning if not shot in an incredibly stable firing platform.  If the gun wasn’t fully supported in all 360 degrees, the malfunction rate skyrocketed.

You should know how your pistols handle when firing from a less than perfect grip. Some guns continue to run just fine. Others don’t. Most shooters don’t understand this fact.  You need to do some work to figure out if your gun has any potential weaknesses and then adjust your firing techniques in such a manner that you minimize the chance of experiencing a malfunction in a life threatening close quarter struggle.

Smaller pistols operate on tighter margins.  Any amount of sloppiness in technique will lead to winning the second place trophy in your next gunfight.  If you carry a smaller-sized pistol, you need to do a lot more work to ensure that your perfect shooting habits can counteract the gun’s tendency to jam at the worst possible moment.

It is not unheard of, but it is relatively rare for a student to complete my two-day ECQ class without having frequent malfunctions when using a 1911 pistol of any make or model.

I had one 1911 in class this weekend. I never saw a single malfunction from it. It was a Dan Wesson stainless steel, commander-length, VALOR model. That was the first one I’ve seen in a class I’ve taught. It ran flawlessly.

Even though I took the gun from the owner’s holster while fighting him in a weapon retention scenario and gracelessly tossed it onto the ground, the gun continued to run like a champ.

N=1 so don’t run out and buy a Dan Wesson based solely on my recommendation.  With that said, it seems to be a well made 1911 and may prove to be competitive with the upper-end Colt or Springfield Armory 1911 autopistols.

Don’t get angry and send me hate mail because I said your chosen blaster didn’t perform well in my class.  I know your gun has shot flawlessly for thousands of rounds.  That’s great.  Maybe you have that one special snowflake gun that doesn’t share the problems I see when all your gun’s siblings hit the line in my class.

Or maybe you just haven’t tested your gun vigorously enough to find its breaking point.  Do the work necessary to ensure that your gun will function perfectly in every possible environment and shooting position.  You aren’t fighting an old west duel in the middle of the street at high noon.  You are carrying your gun so that you can protect yourself in the worst situations imaginable.  Make sure your gun is up for the task you want it to perform.