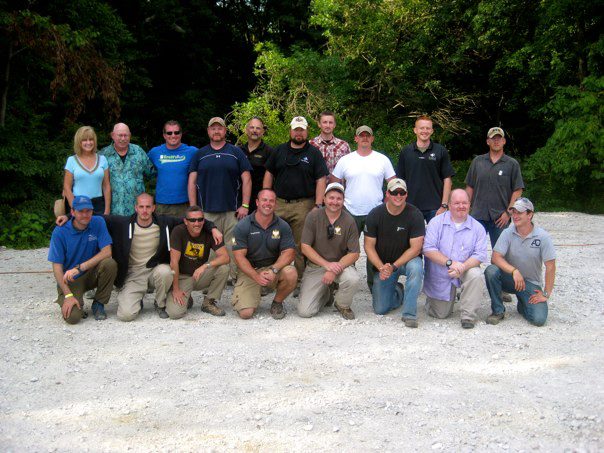 Last week I was honored to instruct at the inaugural Paul-E-Palooza Memorial Training Event.  Paul Gomez was a well known firearms instructor and friend of mine who died an untimely death several months ago.  Approximately 30 of the best trainers in the world (organized by William Aprill and Sherman House) donated their time to create a training benefit for the education of Paul’s young children.  The folks from Raven Concealment donated range space. 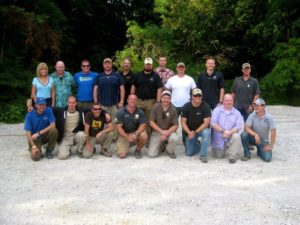 Due to Paul’s fondness for the Ka-Bar TDI knife, I was asked to teach a class on its use.  Because of a previously scheduled conflicting  out of state class on Saturday, I was only able to be at the training for one of the two days.  Even though I missed half of the weekend, I found the conference to be a whirlwind of activity and an amazing feat to pull off with just a couple months planning.  All in all approximately 110 students attended the classes, raising nearly $30,000 for Paul’s kids.  It was a stellar weekend of friendship, learning and camaraderie. 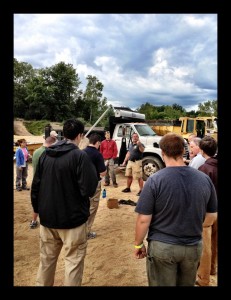 Teaching my TDI knife class in the gladiatorial sand pit

I started my class at 0800 on Sunday morning.  Despite the festivities of the night before, I still had more than 25 students in my early time slot.  I reviewed the history of the TDI knife and went over some simple access drills, cutting patterns, and how to use the knife in a defensive manner.  The class was light-hearted and fast paced, filled with exceptionally motivated students.  It was a true pleasure to teach.

After my class was completed, I bounced around, trying to attend as many classes as possible.  I started with Tom Givens‘ excellent lecture about the 58 gunfights his students have won…and the two that his students lost.  After that I caught some of Craig Douglas’ (SouthNarc) “Managing Unknown Contacts” class.  I’ve seen Craig present this material four times, and every presentation gets better.  If you haven’t trained with him, you need to do it soon.

Later in the afternoon, I listened to Andy Stanford’s lecture on “Tactical Eclecticism”.  I’ve known Andy for a long time.  He’s actually the man who introduced me to Paul.  It was great to see him (and his accordion playing abilities) once again.

Chris Fry from MDTS had a live fire class that was filled to capacity later in the afternoon.  I ended up helping him as a range safety officer because his class was so large.  Chris is a great guy and presented a stellar class on one-handed pistol manipulations.  He should be on your training short list as well.  Besides myself, 3 other professional instructors helped Chris with his class.  It just highlights the superior quality of the trainers involved in this event.  No one was trying to “steal” students.  Everyone came together to accomplish the goal of providing a quality training experience for the students and raise some money for Paul’s kids.  It was truly a humbling experience. 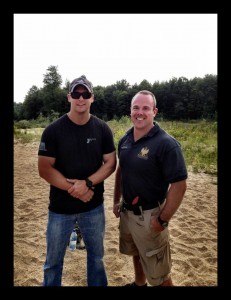 With Chris Fry of MDTS

Although I didn’t get to take any other classes, I did enjoy conversations with several old friends and met quite a few new ones.  It was great to finally meet Claude Werner, Spencer Keepers, Paul Sharp, Jeffrey Bloovman, Morgan Atwood, Larry Lindenman, Shane Gosa, and Rachel Greene in person after interacting with them online and reading their work for so many years.  I also got to spend some time talking to SouthNarc, fellow TDI instructor Jeremy Decker, and Shay VanVlymen.  All of these folks (along with many others) donated their time and talents to create one of the year’s best training events.  If you are looking for some professional firearms or combatives training, these guys are the best of the best.

The Paul Gomez Memorial Training Event will be held again in August of next year.  Watch my site for more details.  If you missed this year’s event, make sure you plan to attend next year!