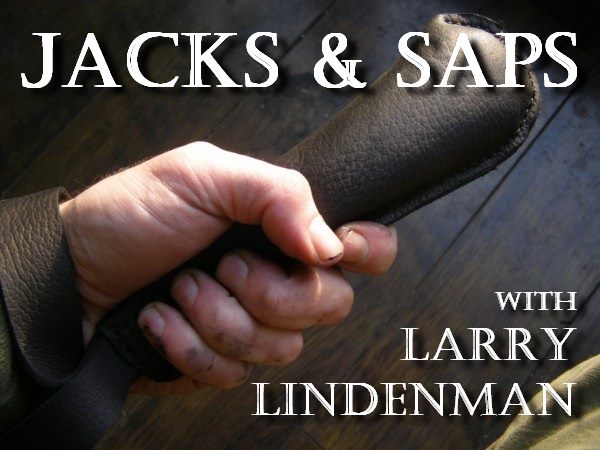 Last weekend I took a wonderful training class from Larry Lindenman from Point Driven Training.  The class was titled “Saps and Jacks” and covered the use of short, flexible impact weapons.  It was masterfully hosted by The Complete Combatant at their MMA facility in Marietta, Georgia.

Larry is part of the “Shivworks Collective,” a group of top notch trainers who each have their own specialties, but are collaborative when developing solutions to common problems.  I’ve trained multiple times with both Larry and all of the other collective members.  I highly recommend them all.

I chose to take this class because I really knew nothing about saps.  My police department forbids carrying them, so I got no professional training in their use.  I have half a dozen other impact weapons instructor certifications, but running a sap was a hole in my game.  As I’m planning on retiring in less than two years, I may find myself carrying a sap defensively and wanted to learn how to use it.

The class started with introductions, some sap and jack “show and tell,” and a discussion of the history of the use of both the sap and the blackjack.

After that, Larry transitioned into some of the standardized Shivworks training drills.  Larry explained that the successful use of an impact weapon first involves verbally and physically managing the distance between you and your attacker.  If those efforts fail, one must fight to access the sap, before being able to actually hit someone.

In line with those principles, we started with a brief lesson on “Managing Unknown Contacts” (MUC).  MUC is Shivworks founder Craig Douglas’ terminology for the lessons his group teaches about successfully verbally and physically managing a suspicious encroaching person.  I’ve probably been through some iteration of the MUC coursework about 10 times over the year.  Even though I was familiar with the material, it was valuable practice.

After working our MUC techniques, we drilled training from an initiative deficit (bad guy moves first), focusing on staying on our feet and avoiding a knockout head shot when an attacker starts throwing punches.  We drilled the Shivworks “default cover” to broaden our base and cover up our heads.  If you get knocked out by the first punch, you’ll never be able to get your impact weapon in play.

Because defending oneself and drawing some type of weapon are universal skill sets, all of the shivworks guys teach very similar responses.  I had previously seen the  “default cover” in  other  Shivorks classes with Cecil Burch and Paul Sharp.  Seeing Larry’s slightly different take on the same material was a valuable learning opportunity.

Once everyone got some basic familiarity with the skillset, Larry explained the Shivworks doctrine of “in-fight weapons access.”  After seeing numerous students getting weapons taken away from while drawing  (in both real life and in training evolutions), the Shivworks Collective developed three basic principles for weapons access while within arms reach from your opponent.

Before you attempt to draw any weapon, one of the three conditions must be present:

1) You have enough distance from the attacker that you can safely draw without his interference.

2) You are in a tactically superior dominant position.

If you do not have any of those advantages, it is very easy for the attacker to “stuff” or “foul” your draw in order to keep you from presenting the weapon.  That’s a big problem when it happens.

The Shivworks guys teach four relatively simple ways to take a dominant position against your attacker or to control the limb closest to your weapon:

A large portion of the rest of the class was drilling these skill sets and learning to wait for the proper opportunity to draw your weapon.  We practiced each technique slowly a few times with partners and then Larry gave us some drills where we were instructed to be “Competitive and Non-Consensual” with our partners.  In layman’s terms that means that with an actively resisting opponent, some of the slow speed traditional techniques may not be effective.  Larry wanted to pressure test all of the new techniques we learned against hard fighting attackers.

We constantly changed partners after each drill to work with a wide variety of body sizes, shapes, and skill levels.  In the video below you’ll see me and a friend (one of Nick Hughes’ instructors at Warriors Krav Maga), working on getting an arm drag against a resisting opponent.

We spent a long time wrestling around with all of the other students in the class, learning the techniques Larry presented.  That took us until it was lunch time.  Larry had a bunch of material to cover and decided to make our lunch break a “working lunch.”

As we ate, Larry explained some very ingenious ways of making improvised impact weapons.  I thought I knew a lot about this topic, but Larry showed a couple of options that I had never seen before.  He swore us all to secrecy, so you’ll have to take one of Larry’s classes in order to learn how to do it.

After lunch, we actually got into the sap specific techniques.  Larry started by teaching how to properly develop power with the sap without telegraphing your strike.  He then covered target areas concentrating on:

We practiced both single strikes and follow up strikes to each target area with both the flat and the edge of the sap.  The flat of the sap spreads the force of the impact over a greater surface area and reduces the chance for seriously injuring your opponent.  The edge of the sap digs deeper, causes more damage, and can actually result in cuts and bleeding.  Being able to modify the level of force you would like to use for each given situation is a very unique advantage that the sap has over many other weapons.

After we got the strikes down, Larry taught some concealed sap “ready positions” with the sap already in hand.  We worked strikes from each position and then worked on combination drills for multiple sap strikes.

As typical in a Shivworks class, we ended doing some training scenario evolutions.  Larry wanted to make sure that our newly-learned techniques would hold up against a resisting opponent.  He brought the group to the corner of the room and all of the students made a “cage” with our own bodies while watching two students duke it out inside.

The goal of this exercise was to start from a position of disadvantage, work to develop either a dominant position or to tie up your opponent’s closest arm (to prevent a draw stuff), access your sap, and strike the opponent.  Here was my evolution against Brian Hill (one of the hosts and a 30-year veteran martial arts instructor).

In the evolution, I tried to execute a couple arm drags (one of my favorite moves), but Brian didn’t make it easy for me to do that.  I ended up with a fairly weak inside tie, but it allowed me to draw without worrying about Brian grabbing my weapon or stuffing my draw.

This was pretty representative of the average intensity in our evolutions.  Some pairs went harder than us, some eased back a bit, but everyone worked hard to “earn” their draw.  The atmosphere was almost reminiscent of Fight Club.

I liked the class a lot.  It was very physical.  If you have any medical conditions or problems with hard physical effort, this class isn’t the right one for you.  It’s best for people who are willing to work hard and give the class their best effort.

It would also be a good class to take if you would like a “short version” of the classic MUC and in-fight weapons access skills that Shivworks is known for developing.  A good part of the class was all about fighting for the draw and dominating your opponent.  You don’t have to be a sap carrier to benefit from this knowledge.  The same techniques work when drawing a handgun or knife as well.  If Craig’s two-day ECQC class scares you, this would be a great introduction to some of the drills Craig uses.

Overall, I was highly impressed with both the course material and The Complete Combatant‘s fine facility and organizational skills needed to make the event a success.

For what it’s worth, I paid full price for the course and paid for my airfare, hotel, and rental car fees out of pocket.  I got no compensation (except an awesome grilled steak dinner at the hosts’ house after the class) in any form from either Larry or The Complete Combatant.

If you have any interest, take the class.  You’ll be glad you did. 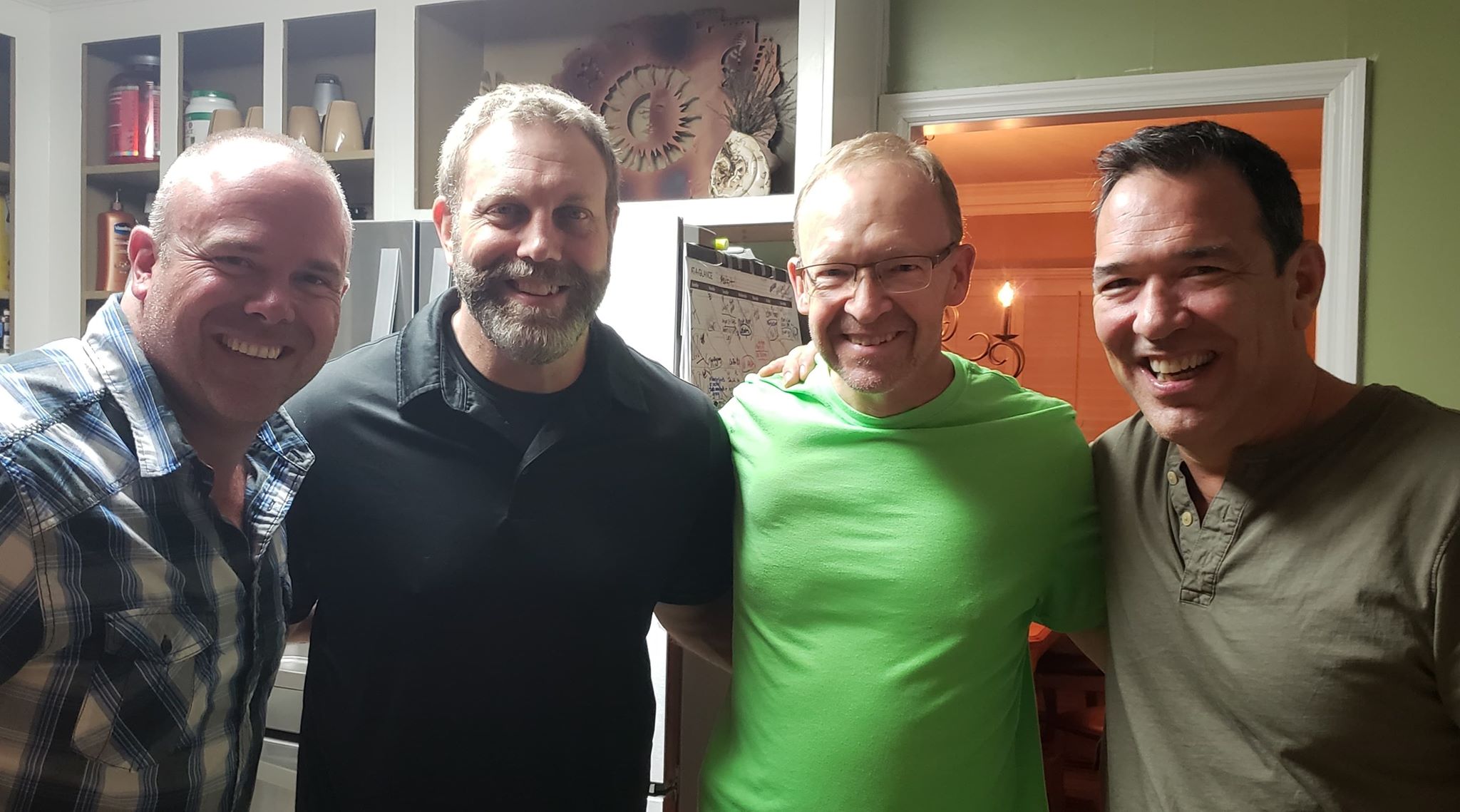 Me, host Brian Hill, Claude Werner, and Larry Lindenman after stuffing ourselves with steak and scotch following the class completion.

For additional reviews of the class, check out Claude Werner’s Jacks & Saps and Timing – Part I.

My amigo Christopher Sanchez also wrote up an AAR on Facebook.

Additional videos can be found at the Complete Combatant YouTube page.