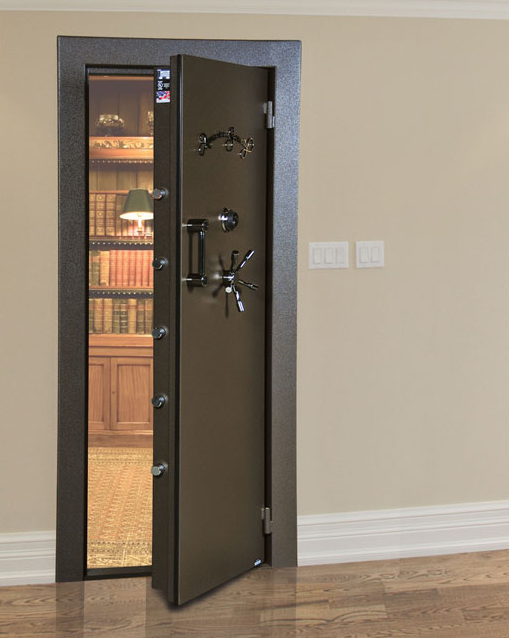 This is a guest post from my friend and fellow trainer Ron Borsch.  Ron shares some good tips about creating a safe room in your home.  Enjoy.

For those who have not seen it, the exciting 2002 drama movie Panic Room starring Jodi Foster, was a public introduction to the growing criminal method of operation known as Home Invasion. In the early years of my suburban law enforcement career, home-invasion was almost unheard of.

Home invasion is a very serious combination of robbery and burglary,  sometimes combined with assault, rape, hostage taking, or murder. Thugs actually plan on you being at  home during the attack. Surprise will be on their side, especially if you are sleeping.  A designated safe-room is where the family could be quickly rounded up and protected from harm. This article will be focusing primarily on a practical and economical safe room door fortification.

The safe-room used by Jodie Foster’s character was well beyond the means of most folks. While her character’s safe room was near perfect, what I am proposing here is a far more affordable plan that provides safety for your family while buying time for police to arrive.  If your home’s exterior doors are sturdy and secure, the next priority is creating a fortified safe room.  The most practical thing we can do is to fortify a room for family refuge.  Most of the time the location will be your master bedroom.

There are four mental conceptual principles that must be discussed before working on the physical construction of the safe room. There are times to escape and times to shelter in place. In the case of a typical home invasion, it is usually both safer and faster to lock down in a safe room rather than flee the home.

In order of importance, the four general principles are:

Imagine a situation where your family is home, perhaps sleeping and there is a commotion sounding like someone trying to break-in.  How quickly can you get yourself and your family to your designated safe room?

Years ago, I came across an enlightening reaction time test.  The test is simply timing yourself immediately after unlocking an entry door and quickly walking directly to your safe room.   This would be the minimum amount of time you would have to collect the family and secure the safe room door. If the exterior doors held longer and or the home invaders were not familiar with the layout of your home you might have more time.  Your goal should be to rally the family and get them to the safe room under any conditions faster than a home invader can gain access to the living quarters of the house.

It is important to understand that the average person will be slow in responding to any complete surprise. Understanding the basics of Boyd’s OODA Loop of Observe-Orient-Decide-Act, would be very helpful. An oversimplification for our purposes is that the first three stages are mental or freezing before any action can take place. Being startled awake is a mental and physical sluggishness handicap. Experts have recommended against an armed resident confronting intruders if it can be avoided. Their reasoning is that in the fog of sleepiness, wearing PJ’s and perhaps in the dark is a serious disadvantage versus wide awake and desperate armed criminal/s who are probably under the influence of drugs. I concur, NOT advisable!

In most cases, actual confrontation should only be part of a last ditch “Back-up” plan. There is another practical angle to think about: Some authorities have suggested that on even a “good shoot”, eventual legal fees could exceed fifty thousand dollars. If you and your family have reached safety and are waiting for police to arrive, stay-safe!

In a home invasion emergency, wait until you are secure in the safe room before notifying police unless one family member can call while another is performing the security lock down. Family team-work is great, as long as family members still possess and practice skill-sets enabling them to also act individually. The plan here is to hold the fort until reinforcements are able to arrive!

Even determined home invaders would rather not face the police. These thugs are depending on speed, surprise, violently overwhelming any resistance and escape. When a significant time delay or encountering physical barriers occurs, their fear of police intervention may increase, causing them to abort the attack.

WHEN HELP IS NEEDED IN SECONDS

It might be hard for some to understand that as fast as police respond when notified of an emergency, there will still be a time delay before they arrive. Ultimately, you’re on your own until they get on scene. A relevant and true quote here is “When help is needed in seconds, police are only minutes away”.

Your take-away here should be to understand that you will be on your own for an anxious and unknown time period.  How long the wait will be depends on where you live and how near an available officer is when you call. For example: In the 2011 Tucson AZ 15 -second Rapid Mass Murder© event, (Congresswoman Gabriel Gifford’s incident, 6 murdered and 13 wounded), once notified, police arrival time was four minutes. Learn your local police response time so that you know how long you may have to fight without assistance.

Having primed your “software”, now it’s time to discuss hardware.

Physically holding your safe room door closed is not a viable option.  In addition to good locks,  I like the bottom of the door security devices such as the “Bearacade” that derives its strength from the floor and prevents the door from pivoting open. (www.DoorBearacade.com). With the Bearacade,the company states that it will resist more than 4,500 pounds of force before failure.

The Bearacade floor pin goes into a small pre-drilled hole in the floor and was originally designed for school classroom lockdowns.  The company’s B2 red model is designed for interior inward-swinging doors, like offices and bedrooms doors See videos, (4) demonstrating the Door Bearacade, including shooting it with shotgun, rifle and pistol at https://www.youtube.com/channel/UCKcxscNbWhDstAwVflUKBrA.

Residential interior hollow-core doors, door-frame and hardware were never designed to withstand a kick-in. The weakest link is the soft wood door frame. While installing a key-type dead-bolt turn knob would be faster to secure than the Bearacade, an ideal safe room door would have both. The Bearacade would absorb the majority forces that would normally overwhelm the soft wood door-frame locking area. In my mind, having both would be closer to tripling the total door security strength. In an emergency, secure the dead-bolt first, then put the Bearacade in place.

After the soft wood door-frame weak point, the next weak point is the hollow core interior door itself. Some folks may be more comfortable with a stronger solid core door for the master bedroom/safe room with dead-bolt lock. For exterior doors as well, longer, three inches or more, screws for the door-frame metal bolt-latch slot for the lock and hinges should be installed to help counter any kick-in forces.

There are a myriad of things a homeowner can and should be doing for family safety and security. One is to inquire if your local law enforcement agency does outside-inside security assessments to gain valuable insight to something you may not think of.

Exterior-entry doors are especially important. Breaking door glass within a thug’s long arm reaching distance to release the inside deadbolt and door knob is a natural weakness and very common break-in point. While nothing is perfect, an economical security cover for these glass areas would be decorative sheet metal. Design samples available at https://www.bing.com/images/search?q=Decorative+Metal+Sheets&FORM=IDMHDL  that still allow you to see out. This could be securely fastened around the inside window perimeter with sheet metal screws.

An alarm system may be beyond family budget affordability. As part of the multi-layered approach for home safety and security, if you can afford an alarm system, go for it. I understand some of the wireless systems are quite good. On the other hand, having a dog is a more economical investment, with side-benefits, as an early warning system. An alert dog may very well hear person/s outside before your entry door is kicked-in and alert you by growling or barking. Less than determined home invaders, not aware you had a dog, might even be deterred by the commotion, having lost their advantage of surprise.

It is a mistake to delegate your personal protection responsibility exclusively to off-site police, fire, ambulance another person or in any plan that places all of your safety eggs in one basket. Take personal responsibility now for your own protection and family safety. Expect and plan to hold your own until officers can arrive.

Think of home security in multi-pronged layers. Strong exterior doors, with no glass in arms reach of interior locks and longer screws into the wooden framing make it more difficult to break in, giving you more time or at least more warning noise. Any commotion buys precious time and the resulting delay may deter entry altogether.

The last barrier, the safe-room fortified door, also alerts you to the intruder’s closer presence, buys more time for police to arrive and may also prevent thug entry altogether. The very last intruder obstacle is your home-court advantage final back-up plan: An armed and prepared homeowner protecting his or her family with a firearm.

About the author: Ron Borsch manages the PACT Consultant Group which does pro-bono safety presentations for local civic groups, schools and churches. Ron is on the advisory panel for www.SchoolGuard.com, a teacher’s smart phone app directly notifying police officers on patrol. For the last several years, he has served on two panels of experts at the ILEETA (International Law Enforcement and Educators Training Association) in Chicago IL.

Ron served 30 years as a Bedford Ohio Police Officer. His second career was supported by the seven SEALE Chiefs of Police, commissioning him to found and from 1998 to 2015, be the manager and lead trainer for SEALE Regional Police Training Academy in Bedford Ohio. From the original seven police departments, Ron eventually had over one hundred law enforcement agencies from ten states attending the academy. Ron was a U.S. Army Paratrooper and is a Vietnam veteran, (1965-66 101st Airborne). 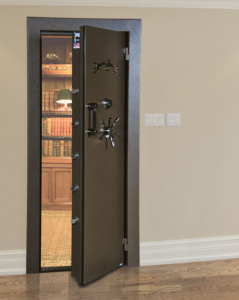