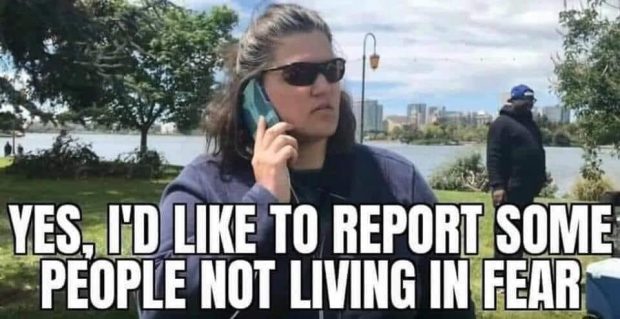 *This article is the personal opinion of one grumpy old policeman and most certainly does not express the view of any police supervisor, police agency, or municipal jurisdiction with whom I am employed.  My writing should not be considered professional advice.  Instead, it should be viewed in the proper context of being entertaining social commentary on the global topic of pandemic survival.  Enjoy.

Cops across the country have seen a massive increase in calls reporting “social distancing violations.”

People around the world are snitching on ‘naughty’ businesses and rude neighbors.  NYPD officers are making custodial arrests for violating social distancing rules.  It shouldn’t surprise you to know that as a result of those arrests, almost 15% of the NYPD officers have now reported being off work sick with coronavirus symptoms. 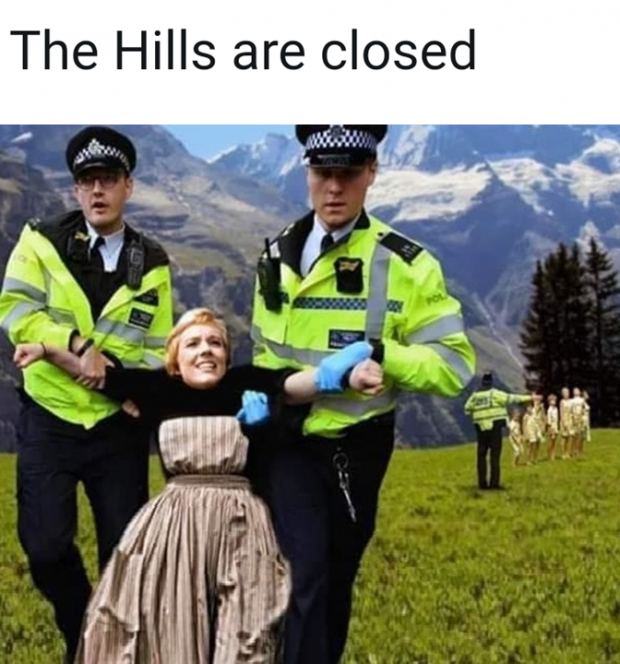 Some police departments are even rolling out anonymous snitching apps so that people can turn in their neighbors for the heinous crime of being too close to another person in this time of quarantine.

I personally think we need to slow down a little bit before we start throwing people in jail for conduct that was completely legal and normal two weeks ago. 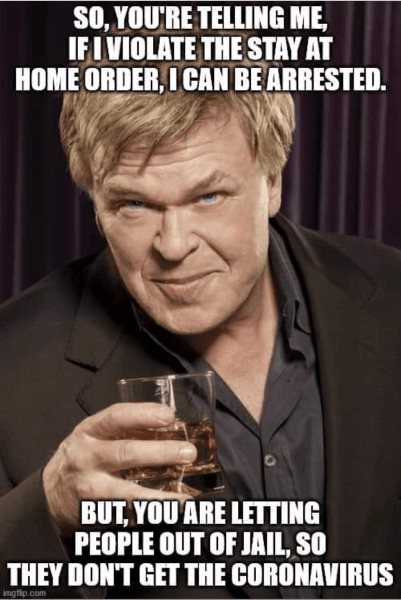 I’ve personally heard and responded to a few of these calls as they’ve come out in the past few weeks.  Most calls we are getting are not actual violations of the stay at home order.  Generally the callers are reporting family groups having picnics in parks, people playing tennis, or kids riding bicycles closer than six feet apart.  Of those three reports, only the kids riding bikes in close proximity is a violation of the order.

Family groups can congregate together outside.  People playing tennis are maintaining more than enough physical distancing to remain safe from being infected by a tennis partner.

I believe that people should be staying home and distancing themselves from others.  Despite these beliefs, I do not think that it’s productive to call police to report violations of the stay at home order.

Think about this.  If your goal is to stop the virus from spreading, you are failing miserably by calling the police. Do you really want those kids to be contacted by a police officer?

We cops are running around everywhere, arresting people with the virus, going into sick people’s houses, and dealing with literally every dead body in town. Undoubtedly some of us are contagious right now and not showing symptoms. Are you sure you want one of us to go talk to the kids playing too closely on the playground? The chance of a cop infecting a kid (or vice/versa) in that scenario is far greater than a child infecting another child. 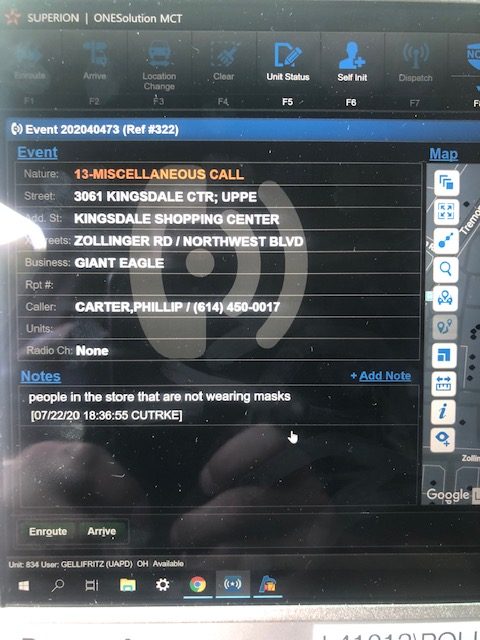 These calls do not make your local policeman very happy.

In addition to exposing the violators to the cops (and the cops to the violators), we must also understand that all of these orders are ultimately enforced at the point of a gun.  If people refuse to comply, they will be arrested.  If they resist the arrest, they may be killed.  That’s something that few people consider.  Do we want the penalty for failing to stay six feet away from someone else to be death?  If people resist arrest, that may be the result.

Even if they comply with the arrest process, they may be dramatically increasing their risk of death from the virus.  In my state, a violation of the quarantine order is a second-degree misdemeanor punishable by a $750 fine and/or up to 90 days in jail.  Let’s look at the true consequences of being arrested for such an offense during pandemic times.

– The violator and the cops are in direct physical contact during the arrest process, increasing the risk of the disease spreading

-The person will then be released on a summons to appear in court at a future date.  Those court hearings bring violators, attorneys, cops, prosecutors, judges, and court staff all in close contact with one another.

-If the violator is sentenced to jail time, he or she will be exposed to dozens of jail employees as well as hundreds of prisoners held in close proximity in facilities that are almost impossible to disinfect.

Which action causes the greater harm?  Is it better to ignore two people who are obviously violating the social distancing guidelines (which may result in one person infecting another) or is it better to arrest the violator and create joint close-range exposure between countless cops, additional prisoners, jail staff, court employees and attorneys?

If you really want to stop the virus from spreading, you should not be favoring the criminal arrest process as the solution to this problem.  Arresting folks just causes the virus to spread farther and faster.  What do you think happens when you call police to report social distancing violations?  Inevitably, some of those contacts will result in an arrest.  Cops enforce laws through the power of arrest. 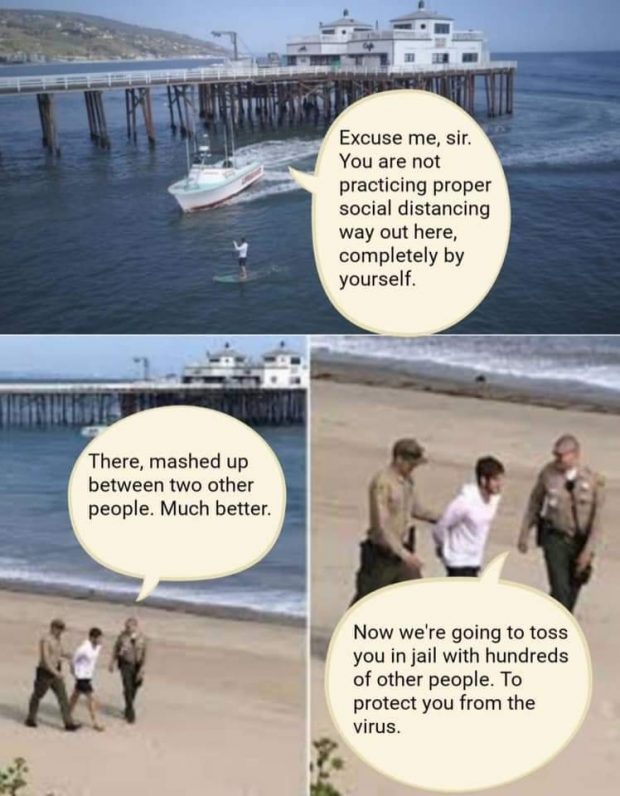 The arrest of the person violating the social distancing orders may cause you some personal satisfaction, but it will make the problem inevitably worse.

In every community, there is a significant minority of residents who are the self-appointed “rule guardians.” When a rule is broken, no matter how trivial, these people become outraged and call the police. It makes no difference if the rule breaker is not causing trouble for anyone.  Just the fact that someone is breaking the rules makes these people enraged.

Now, when everyone is sitting at home doing nothing, these “rule guardians” are making it their pet projects to call the police every time they see someone outside.

The same neighborhood guardians who previously reported minor parking violations, “suspicious” people, barking dogs, kids playing with fire crackers, and people playing loud music now have a new obsession. They sit in their homes and call the police whenever they see people who are out in public without maintaining the proper six foot interval. 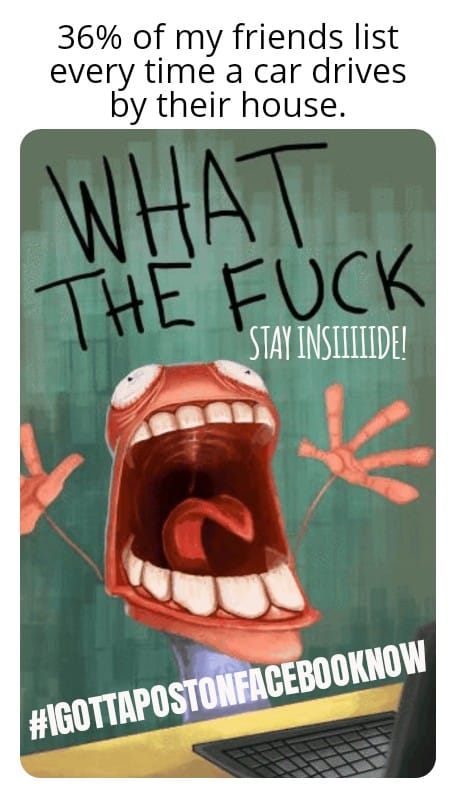 Why are these people motivated to “snitch” on petty rule breakers?

I think part of it is the media.  Mark Manson explains the concept well in his book: The Subtle Art of Not Giving a F*ck:

“The current media environment both encourages and perpetuates these reactions because, after all, it’s good for business.  The writer and media commentator Ryan Holiday refers to this as “outrage porn”: rather than report on real stories and real issues, the media find it much easier (and more profitable) to find something mildly offensive, broadcast it to a wide audience, generate outrage, and then broadcast the outrage back across the population in a way that outrages yet another part of the population.  This triggers a kind of echo of bullshit pinging back and forth between two imaginary sides, meanwhile distracting everyone from real societal problems.” 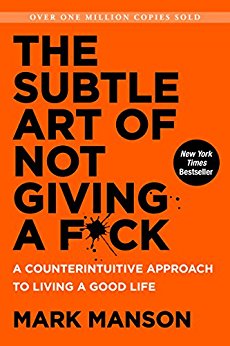 I think an additional cause of “snitching” is our own brain chemistry.  In the book Behave, Robert Sapolsky talks about a study that involved punishing the behavior of people categorized as “jerks.”  The more punishment the “jerk” got for his actions, the more neurotransmitter dopamine was secreted in the brains of the person in charge of the punishment.

Dopamine is a hormone that affects mood, specifically in the reward and motivation center of the brain.  A dopamine spike provides a sense of accomplishment.  Sapolsky concluded: “Punishing norm violations is satisfying.” 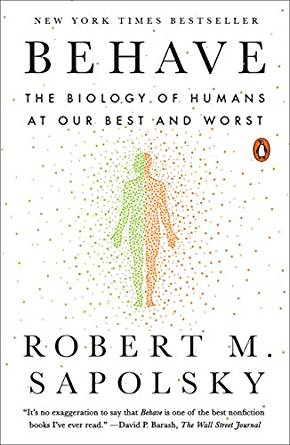 “Dopamine is the chemical that mediates pleasure in the brain. It is released during pleasurable situations and stimulates one to seek out the pleasurable activity or occupation. This means food, sex, and several drugs of abuse are also stimulants of dopamine release in the brain, particularly in areas such as the nucleus accumbens and prefrontal cortex.”

I really think that lots of people lack real meaning in their lives.  They are stressed, unhappy, and unfulfilled.  They have low dopamine levels.  The “snitches” are acting in order to get a small hit of dopamine that will brighten their otherwise miserable day.

No thanks.  That isn’t for me.  I think I’ll get my dopamine hits through adventure travel, sex, exercise, and good food.  I really don’t need to get any extra brain chemical release by punishing every rule breaker.

Have you ever thought about the origin of all these rules?  Should we automatically obey them?  Can we ignore some and abide by others?  What is the purpose of all of these rules and laws?  Do we really need them?  These are questions that merit exploration. 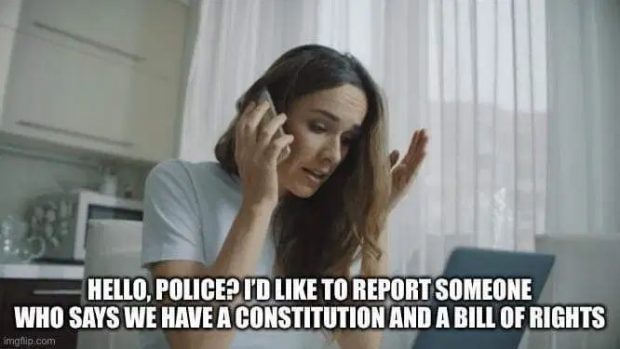 Before calling the police to report a violation of “the rules,” maybe people should instead think deeply about whether the rule violation actually harms someone or merits intervention by governmental authorities.  If one is truly honest about conducting such a mental examination, he will likely realize that calling the cops on a couple of kids riding bicycles close together is a really dumb idea…even if those kids are breaking “the rules.”

“All large scale human cooperation is ultimately based in our belief in imagined orders.  These are sets of rules that, despite existing only in our imagination, we believe to be as real and inviolable as gravity.”

As Harari suggests, the laws requiring people to stay more than six feet away from one another are completely made up.  In some places such conduct doesn’t break any rules.  In other places the exact same action comes with a jail sentence.  Does anyone else think that the concept of creating millions of pages of made up “rules” in and of itself is completely ridiculous?  We literally make up rules and laws out of thin air and then punish our fellow citizens by putting them in a cage when they violate any of those made up edicts. 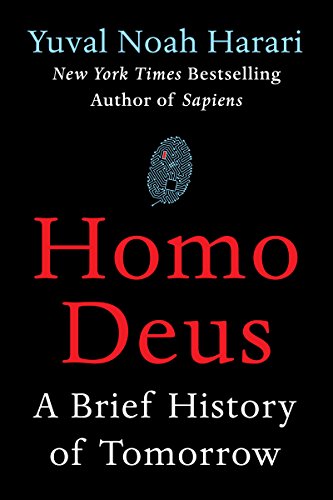 Just a small amount of reflection on this topic should cause some of you to recognize exactly how absurd we humans are when it comes to trying to control other people’s lives, actions, or freedom to exist outside the cultural norms of society.  Who has time for any of that nonsense?

How should we deal with people who violate our current health guidelines?

The best advice I can provide you comes from Caleb Jones’ book: The Unchained Man:

“Learn not to give a shit.  Learn to laugh things off.  Learn to refocus your mind on positive, constructive things whenever you feel yourself getting frustrated at other people’s behaviors.  Remember that most people in The Prison are flawed, limited, irrational creatures, and they’re going to stay that way no matter how mad you get or how many lectures you give them.”

That advice is what we really should embrace. 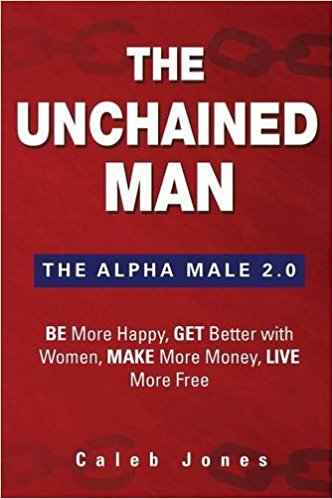 All of us will be in a far better mental and physical place if we only try to control our own actions and we work collectively for the greater good.  Thinking that you can control the actions of other people, no matter how “bad” those actions are, is only a recipe for anger and resentment.  In our current situation, more anger and resentment won’t help.

Focus on doing what you can do to make the world a better place.  Calling the cops to report people being outside may cause more harm than good. 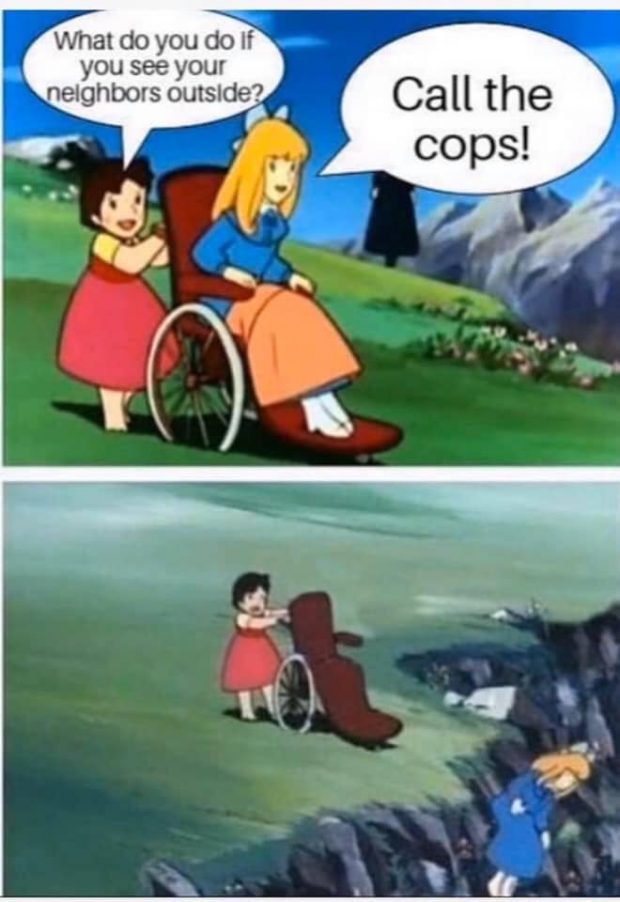