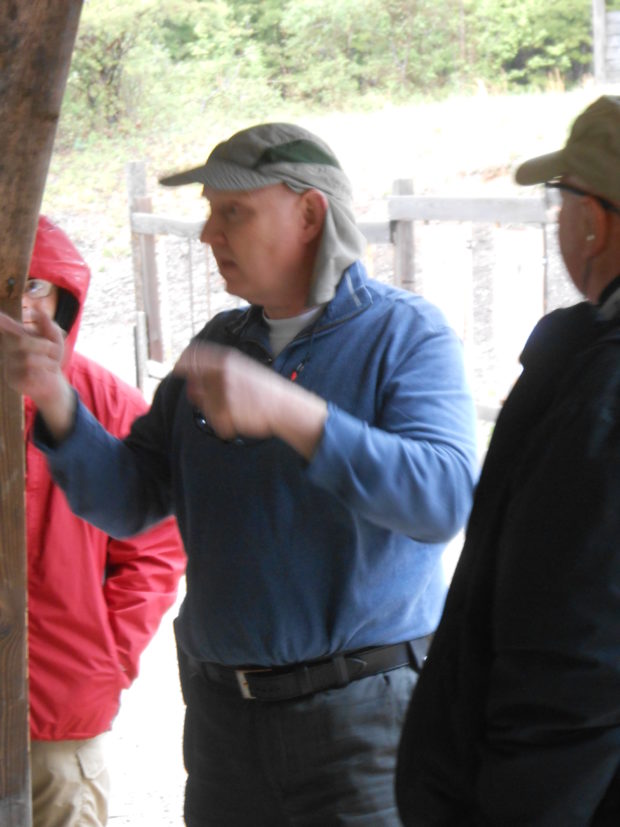 Last week I was able to attend a private training class hosted at TDI.  Michael de Bethencourt came in to teach us two days’ worth of snubnose revolver techniques.

Michael de Bethencourt has been teaching an innovative revolver shooting class for more than 30 years.  Most trainers in the business consider him to be the definitive authority on snubnose revolver tactics.  Although I don’t fully embrace all of his techniques, I don’t think anyone in the world has more thoroughly studied the snub revolver.  He has developed workable solutions for most of the snub’s inherent weaknesses. 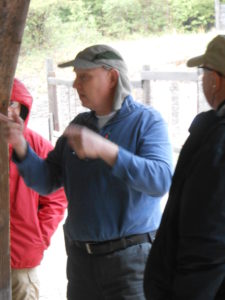 Michael teaching on a rainy day at TDI

Very early in the class Michael described the course as “The World’s Oddest Revolver Class.”  He also explained that many people wouldn’t like his teaching style and attitude; citing the fact that he had previously been kicked out of five different universities, two professional shooting schools, and one and a half police academies as evidence of this fact.

He was right.  Class was supposed to start at 9am.  At 8:45 Michael was literally screaming at the students in the room to hurry up and take their seats.  It seems that he had more students than he expected and he was feeling a bit pressed for time.  The screaming didn’t go over well with most of the students (many of whom also make their living as full time firearms instructors).  I could see about half of the class immediately tune him out.

Michael lectured through the morning hours, providing good information about the history of the snub, manufacturer preferences, necessary support gear, and modifications.  Neither the yelling nor the pace of the class abated.  We were given one timed three minute restroom break during the lecture.  At 12:30 we were given a timed nine-minute “working” lunch break…Michael screamed at us to grab our packed lunches and rush back into the classroom to slam the food down our throats as he continued to talk.  After the nine minutes of eating, we hit the range.

We started out with safety procedures and a very useful demonstration.  Michael explained that the most hazardous event in revolver training is when a gun blows up after a squib round is lodged in the barrel.  He started us out by firing one cylinder full of our chosen practice ammunition as reference.  He then issued us with a training round consisting solely of a primed case and had us fire that to note the difference in both sound and feel.  He instructed us that if we heard the same sound again, we were to immediately stop firing and check our weapons.  It was a good exercise and valuable lesson for all of the students who had never experienced a squib round.

We then practiced Michael’s innovative manual of arms for reloading.  His method is unique and is designed to minimize all extraneous motion during the reloading process.  Consequently, he keeps the revolver in the dominant hand and reloads using the support hand.  I’ve been shooting revolvers for more than 30 years and have always transferred the gun to my support hand for reloading so that my more dextrous strong hand could handle the fine motor task of loading rounds into relatively small cylinder holes.

I could describe his reload technique, but it is easier to watch him demonstrate it on video…

The new method was somewhat difficult for me, given my past training, but I can see where it has merit.  I’m going to have to do further work to determine if I’m going to adopt it completely.

We moved on to drills loading loose cartridges from pockets.  I had never thought this to be necessary, but I was wrong.  Loading loose rounds is useful due to the high rates of speedloader malfunctions.  If your speedloader malfunctions, releasing rounds in your pocket, what are you going to do?  This “worst case scenario” thinking was evident throughout the curriculum design.

If you are loading loose rounds into the cylinder, does it matter where you place them?  It turns out that it does.  Michael advocated not placing the loose rounds immediately next to each other in the empty cylinder.  That way, if you have to hurriedly close the cylinder and start shooting, you are statistically more likely to get a live round (and not an empty chamber) on your first trigger pull.  That’s a smart observation.  Michael also showed us a technique for closing the cylinder that also increases the odds of having a round fired with the first trigger pull if the cylinder isn’t fully loaded.  Good stuff!

We then moved on to using speed strips.  We tried numerous combinations and round arrangements in the strips, starting with loading and firing single rounds.  We progressed through loading full cylinders.  Michael stressed that we should always be prepared to close the cylinder and fire in an emergency.  A gun that contains only one or two rounds, but is ready to fire is better than a gun that contains five rounds with an open cylinder when the bad guy starts shooting at you.  Sometimes it’s better to just load two rounds and get back in the fight rather than taking the time to fill the cylinder.

Michael had a preferred way of carrying his speed strips.  In a six round strip, he leaves the first and last hole empty, placing rounds only in the center four positions.  The gap left at each end makes the strip omnidirectional, used the same way no matter how it is removed from the pocket.  Some people like to leave gaps within the strip (rather than at the ends) to facilitate easier reloading.  Michael doesn’t like that technique.  Having all the rounds together also decreases the chance that the “gap” will be lined up with a cylinder hole if you have to reload in a hurry or in the dark.  Some students questioned the gaps at the ends, wanting to carry more ammunition instead.  Michael explained that the better option was to just carry more four-round strips!  I have to agree. 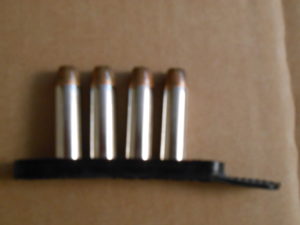 We tried all different variation of strip loading and it turned out that our instructor was right.  Four rounds in the center of the strip is the way to go.  All my speed strips now are in this arrangement.

After the strips, we began using speedloaders.  In addition to the basic manual of arms, we also practiced how to load less than a full cylinder if necessary, how to deal with a malfunctioning loader, and how to adapt if you have a speedloader for a revolver of differing capacity than the one you are using.  It was all valuable information.

The pace of the class never slowed.  We had one more timed three minute break in the afternoon and ended the class at 5:30 pm.

Several of the students spoke with Michael after class and told him that they didn’t appreciate the theatrical yelling and screaming.  He vowed to alter his teaching style and kept his word.  The second day of class was much more mellow.  We even got a 14-minute break for lunch!

The second day started out with some additional lecture material before going out to the range.  Once on the range, we covered alternate sighting methods and ways to recover a dropped gun.  With weapons hands and arms being hit with some frequency in gunfights, this was a useful drill. 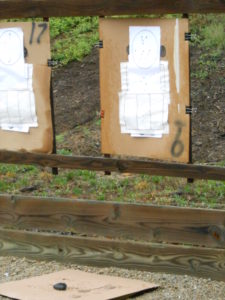 Set up for a weapon recovery drill

We then covered one handed reloads, weak hand only reloads, and transitioning between primary and backup weapons.  The rain was so bad in the afternoon that we halted live fire training and moved class inside once Michael noticed that students fingers were getting too cold to safely perform the weapons manipulations.

Michael imparted an amazing amount of information.  He is incredibly intelligent and passionate about revolver shooting.  If you really want to learn the most up-to-date methods for shooting a revolver, his class is mandatory.  No one else teaches anything like it.  The class is primarily about keeping the revolver up and running.  It’s not a shooting course.  In fact, we rarely even shot at targets, we just shot cardboard target backers instead.  If you have trigger control issues, or can’t line up the sights, you won’t become a better shooter in this class.  It’s a great class for learning revolver manipulations.

On the other hand, you might want to stay away if you don’t enjoy a “boot camp” style atmosphere or want a relaxing training experience.  The choice is yours.