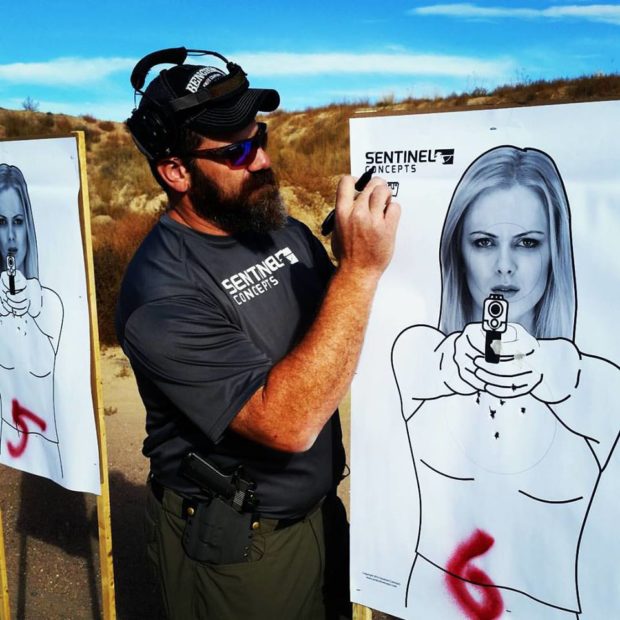 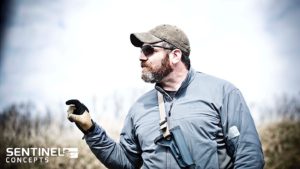 A couple weeks ago I attended Sentinel Concepts “Essential Carbine Employment” course.  It was hosted by my friend Dave Spaulding of Handgun Combatives near Dayton, OH.  Steve Fisher is the owner of Sentinel Concepts and was the instructor for the course.  I had not previously taken any classes from Steve and was looking forward to meeting him and enjoying class as a student. 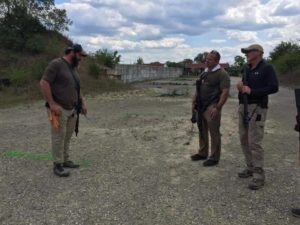 Dave and I talking with Steve during a break

This is Steve’s entry level carbine course.  His website describes the class as:

That’s a lot of stuff to cover, but Steve did it well.

The class was in essence about the techniques Steve uses to shoot a rifle fast and accurately.  Although not a class with a super high round count (I shot 570 rounds), it covered a lot of techniques and presented some material that I had not seen before.  Steve’s approach is a bit unconventional, questioning most of the standard assumptions people have made about shooting the AR-15.  He logically presented his ideas, had us practice the techniques he suggested, and then had a group debrief after every range drill.  I found the format to be effective at teaching his system to both new shooters and veteran students alike.

Steve also built in some opportunities for structured competitive exercises as well.  It was fun competing against all the other students and allowed everyone to experience shooting their rifles under a little bit of performance anxiety producing stress. 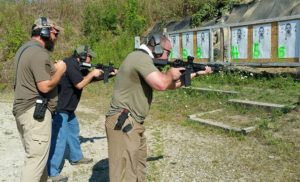 After confirming a 50 yard zero on the rifles, we moved closer and worked speed shooting techniques, adjusting for mechanical offset (height over bore), reloading drills, failure drills, alternate ready positions, reloading, and malfunction drills.  We shot most of the class at distances between 15 and 50 meters, so it was a relatively close range affair.  Even though ranges were short, the class was demanding as Steve required very fast shooting and very tight accuracy standards.

Things I found different from previous rifle training classes were centered primarily on the handling of the rifle.  Steve advocates using a fully extended stock at all times for better recoil control and more precise positional diagnostic abilities.  That’s something that I don’t usually do.  He also advocates a high ready position and handling reloads and malfunctions with the butt of the gun outside the shoulder pocket.  Both of those techniques were relatively new for me.

Even though those techniques were different than the way I usually shoot my rifle, I tried my best to use them all weekend.  It’s important when taking classes from different instructors to give each system a fair test.  I tried to do everything in class the way Steve suggested.  Why would I pay money for his class and not try the techniques I was paying him to learn?  I think that’s an error many students make.  My advice to any firearms training student is to let go of past habits and embrace the techniques the instructor is presenting.  You won’t master anything in a two-day class.  It’s your job to learn the material as best as you can and then test it against other techniques in practice sessions AFTER the class.  Integrate the material you find useful and discard that which you don’t.  Never be afraid to try something new.

I’m not quite sold on the fully extended stock idea.  It does certainly have some diagnostic value.  When that stock is locked all the way out, any errors in body mechanics are magnified to the point that they are instantly noticeable.  I’m not sure, however, that it gives me any speed or recoil control advantage over using a shorter stock.  I’m going to have to continue to work with the technique to determine if it’s useful to me or not.

Steve’s high ready positions and malfunction clearance procedures were noticeably better for some situations than  the techniques I had previously been using.  I will definitely add those to my rifle shooting arsenal.

There were 16 students in the class.  Experiences ranged from rank amateur to very experienced shooters with multiple carbine schools under their belts.  Gear wasn’t much of an issue.  Most folks had their stuff squared away.  Two guns went down with broken or missing firing pin retaining pins.  One custom built rifle wouldn’t function when suppressed.  All the rest of the issues were optic related.  There were a couple of guys who had relatively cheap optics.  They had problems seeing their reticles in the bright sunlight.  One student had an EOTech sight that would not hold a zero.  All the Aimpoint sights and low powered variable magnified scopes worked fine. 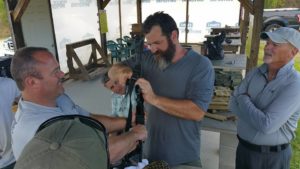 Steve and I working to fix a student’s broken rifle

I truly enjoyed the class and am looking forward to training more with Sentinel concepts in the future.  Check out their schedule HERE and consider booking a class.  You won’t be disappointed. 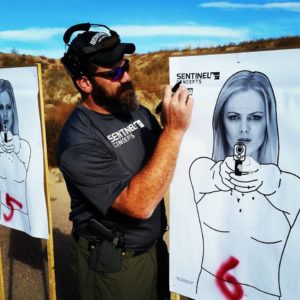 * Thanks to Bryan and Frank for the photos!

*FTC disclosure:  I paid full price for this class out of my own pocket.  I have no financial interests with either the instructor or Sentinel Concepts.  I am not being paid for this class review.