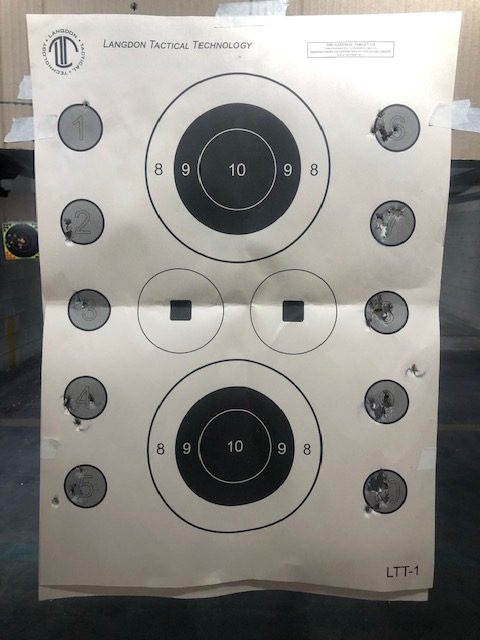 I got this drill from Ballistic Radio’s Facebook page.

Dot Assessment Madness AKA D.A.M. Is a 55-round assessment fired on the excellent Langdon Tactical, Inc. target. 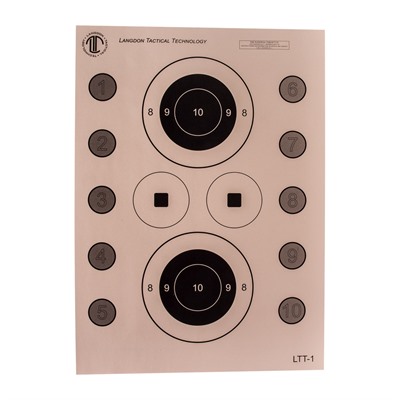 Firing the same number of rounds as indicated by the number on the circle.

Reloads must be done from slidelock/empty gun.

Scoring is raw time +1 second per miss. More than 9 misses is a DQ.”

This one is a 55-round drill and combines a lot of the aspects one needs to be a proficient shooter.  I think it’s best used as an occasional test to judge performance improvement rather than a regular staple in your practice session.

I shot the drill last week.  I hadn’t fired a gun in more than eight weeks.  That’s been the longest period of time I’ve gone without shooting practice in more than 20 years.

In late October, I woke up one morning and couldn’t see out of my left eye.  More than half the visual field was covered by a black splotch and the rest of my vision was severely distorted.  Straight lines appeared to have multiple curves.

I went to my eye doctor the next day.  She diagnosed an issue with my retina and referred me to a retinal specialist.  It turns out that I have a condition called “retinal neo-vascularization.”  In my case it’s a genetic defect that causes abnormal blood vessels to grow in the back of the eye.  Those blood vessels are weak and randomly leak fluid.  The fluid very quickly damages the retina.  Most of the damage cannot be repaired.

It’s a condition that regularly happens (with a different etiology) in older folks (called age-related wet macular degeneration) and eventually leads to almost total blindness in the affected eyes.  The doctors are unsure about the likely trajectory of the condition in a person my age with otherwise healthy eyes.  It may stabilize or it may get significantly worse.

I started a treatment program whereby I’m getting monthly injections of a chemotherapy drug directly into my eyeball (just as bad as you might imagine).  The drug shrinks the rogue blood vessels.  After a couple months of injections, the vision has improved in my eye about 50%.  The black spot is gone, but a good portion of my visual field is still badly distorted and isn’t likely to get much better.

It’s my left eye that is affected.  Luckily that isn’t my dominant eye.  I tried to shoot soon after I was diagnosed and it was a nightmare.  I shoot with both eyes open.  My left eye’s distorted vision negatively affected my shooting ability even though it wasn’t my dominant eye.  I had to teach myself to close my left eye entirely if I wanted to shoot with any semblance of accuracy.

That was a hard transition for me.  Besides needing a lot of dry practice, the eye issues caused headaches and eyestrain in my good eye.  The drug they injected me with had some serious side effects as well.  I gained 15 pounds in 12 days after the first injection.  The drug sapped my motivation to do much of anything and caused me to feel dizzy for several days after each injection.

Those conditions made shooting difficult and led to my eight-week gun vacation.

I’m feeling a bit better now and can sort of see out of my left eye, so I decided to run this drill a few times at the range.  I shot the drill cold after nothing but dryfire for a couple months.  Here are the results of four sequential drill runs with my police duty pistol (Glock 17):

One of my better runs

Overall, I didn’t feel great about my performance, but I actually scored better than expected given my long lay off.  I’ll continue to train with my distorted vision and will try this one again in a few months and see if I can make any improvements.

This is a fun drill.  You’ll go through a lot of ammo really quickly.  Give it a try.  I think you’ll like it.