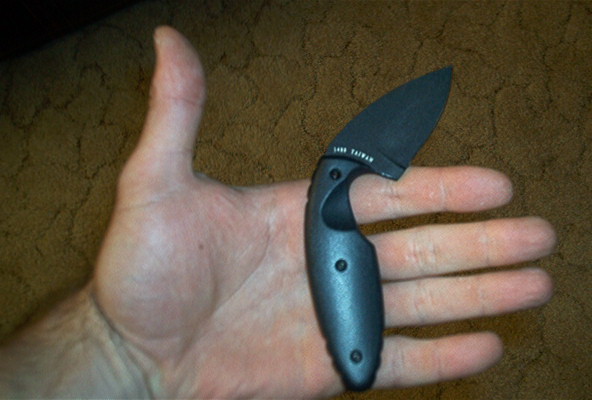 The next time you see a police officer, take a look at the pockets in his or her pants.   It’s likely you’ll notice the majority of them have a folding knife clipped there. But what about fixed blade knives? There’s a good chance you won’t see anyone carrying a fixed blade knife, except for big blades attached to the gear of certain tactical officers. 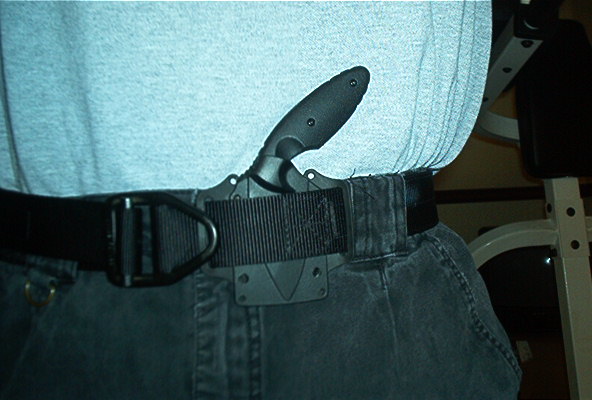 KaBar TDI knife mounted on officer’s trouser belt. It will be covered by his duty belt.

After providing a couple thousand students over the last 15 years  the skills they need to defend themselves with knives, I’ve come to the conclusion that the folding knife is simply not a viable option as a defensive weapon for the majority of police officers.  That’s not to say that officers haven’t successfully defended themselves with folding knives in the past, or that they won’t continue to do so in the future.  The officers who have been victorious using their folders have generally been either extremely well trained or very lucky.

Since it seems that most agencies barely allocate enough funds to train their officers in more mission-critical tasks like firearms, self-defense tactics, and driving; it is unwise to expect that they will expend the necessary money to make all officers proficient knife fighters.  It is equally unwise to depend on luck to carry those untrained officers through a violent confrontation.  There is another option… allowing officers to carry fixed blade knives.

Fixed Blade Advantages- In a combative context, a small fixed blade knife, carried moderately concealed near the centerline of the body, is far superior to the majority of folding knives.  Folding knives, by definition, require opening before they can be used.  Theoretically, this isn’t a concern, but practical experience shows otherwise.  The act of opening a folding knife under the stress of combat is both dangerous and, in most cases, too slow to be effective.

Under the stress of combat, an adrenal “fight or flight” response is created by the body.  The physical effects of this response manifest in such phenomena as auditory exclusion (the diminished ability to hear), shaking and tremors, blood being shunted from the extremities to the body core, and a loss of fine motor skills.  When an officer attempts to open a folding knife under these conditions, the result can be disastrous.

When I place officers under extreme stress in force-on-force scenarios fighting an attacker in a padded suit, they generally fumble while drawing and opening their knives despite significant training.  In the fight, they can’t locate knives in their pockets, drop their knives on the draw, and/or fail to fully lock them open if they do manage to get them out.

Besides dropping their knives, the loss of fine motor skills makes officers likely to cut themselves while opening and establishing a fighting grip.  The factor that often goes unnoticed is the fact that officers in a close quarters life or death struggle cannot often see the knife they are deploying.  In that situation, they rely on hearing the “click” of the lock to know if their knives are fully locked open.  Auditory exclusion can frustrate this ability to hear the knife lock fully open, which results in officers cutting themselves when they stab or slash at a hard target with an unlocked blade.

None of these issues arise when officers use fixed blade knives.  An easily taught, full-hand gripping motion starts the draw and then the user can immediately begin cutting to save his life.  No fumbling, no opening, no accidental cutting; just a simple to use weapon that quickly appears in the officer’s hand and surprises any attacker ignorant enough to target him.

The Speed Advantage- There is also a noticeable speed advantage when comparing folding knives to fixed blade knives.  In all my police knife classes, I do a simple drill to illustrate the discrepancy to my students.  After approximately three hours of training the students how to draw and quickly open a folding knife, I have them stand in front of a target with their folding knives carried in their choice of positions.  Attached to the target are two balloons.  The objective of the drill is to draw the folding knife, open it and pop the balloon.  I time these efforts on a commercial gunshot timer, which records the sound of the popping balloon.  After doing the drill with a folding knife, I have the students repeat the same drill with a fixed blade knife mounted in the front center of the body.  The time differences are unbelievable. 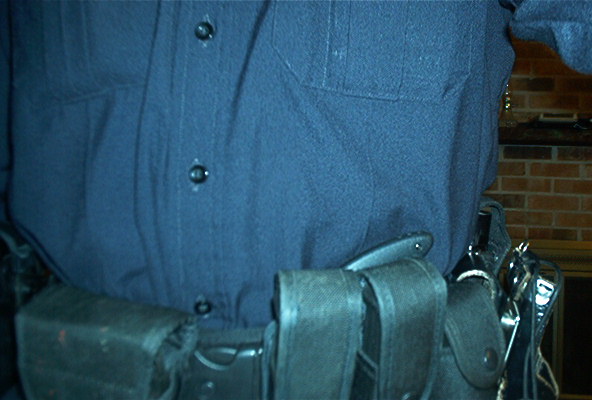 I documented the times of 56 students in two recent knife classes.  The average time to draw the folder and pop the balloon was 2.49 seconds.  The average time with the Ka-Bar TDI knife (a fixed blade) was 0.99 seconds.  The fastest student with a folder (including assisted opening folders and folders with the “wave” opening method) was slower than the slowest person using the TDI knife.

Besides the time difference, most of the students using the folding knives had a very poor grip.  In their haste to pop the balloon, students stabbed as quickly as possible, without taking the time to use a full-hand grip with the thumb locked down.  If these students used the same grip while fighting off an attacker, they would likely either cut themselves or quickly drop their knives.

In contrast, all but one of the students had a secure grip on the fixed blade knife.  When no opening is needed, the students do not have to transition between a grip for opening and a different grip for fighting.  They can acquire a proper grip during the draw process and maintain it throughout the fight.  The importance of a secure tight grip on one’s knife cannot be overstated.  An officer can inadvertently slide his fingers up onto the blade if he has a poor grip.  That problem is endemic with folding knives.

The clear differences in speed and gripping ability between the two types of knives become even more apparent when the officer is actually fighting.  Remember, the drill I described above involved absolutely no stress.  When an officer is fighting for his life, being pummeled, choked, and potentially disarmed, the deployment of a folding knife actually becomes even slower and more difficult than my simple drill indicates.

Considering the fact that the only time an officer should be fighting with a knife is when he is in life-threatening danger, the choice of blade types becomes an easy decision.  Just imagine how much damage an attacker can inflict in the five seconds it takes to realistically draw and open a folding knife.  Contrast that with the damage inflicted in just one second, the average draw time for the fixed blade knife.  The choice is clear.  The fixed blade knife is much better suited for fighting and weapon retention.

Disadvantages of the Fixed Blade- Some trainers will argue that the speed advantage of the fixed blade is actually a liability in terms of weapon retention.  They say that because the fixed blade knife is easy for the officer to draw, it is equally easy for his opponent to take away from him.  This is not always the case.   I teach officers in my class how to carry a fixed blade in such a manner that it is not overtly visible, but can be instantly drawn.

I suggest carrying the fixed blade mounted on the officer’s trouser belt behind a piece of equipment such as a magazine pouch.  This partial concealment, combined with a few weapon retention skills will ensure that the officer is able to retain his knife in a confrontation.

The bottom line is that it is easier to teach an officer to retain a fixed blade knife than it is to train an officer to draw and open a folder under stress.

With the gaining popularity of the Ka-Bar TDI knife and other fixed blades marketed to law enforcement, I hope to see officers carrying better fighting tools in the future.  They can still keep their trusty folders for peeling apples and cutting seat belts, but all officers should be carrying a well-designed fixed blade for when things get more serious.