My friend Tom Givens (support him on Patreon for lots of quality content) recently wrote about a South African ammunition company who has started importing 9mm and 5.56mm cartridges into the USA at extremely reasonable prices.

I decided to buy a case.  I’ve been very happy with it so far.  I took a class from Tom last weekend and he told me that he had personally fired around 600 rounds of this ammo without a single malfunction.

I’ve fired 650 rounds out of the case that I bought.  I’ve had exactly one malfunction.  I had a fail to extract.  I hadn’t cleaned my gun for about 6000 rounds.  I suspect that a really dirty chamber caused the malfunction, but I don’t know for sure.  It could have been the ammo, but I doubt it.

I plan on buying some more.  It shoots very gently out of my Glock 19.  Tom stated that it chronographs at about 1180 fps for the 124 grain load, but it feels much lighter.  It shoots exactly to my sights in my Glock.

Using it, I was able to manage a second place overall (out of 20 shooters) at the Rangemaster Master Firearms Instructor class I took last weekend.

Here is my target from the very demanding Rangemaster Advanced Bullseye Course with shots out to 25 yards. 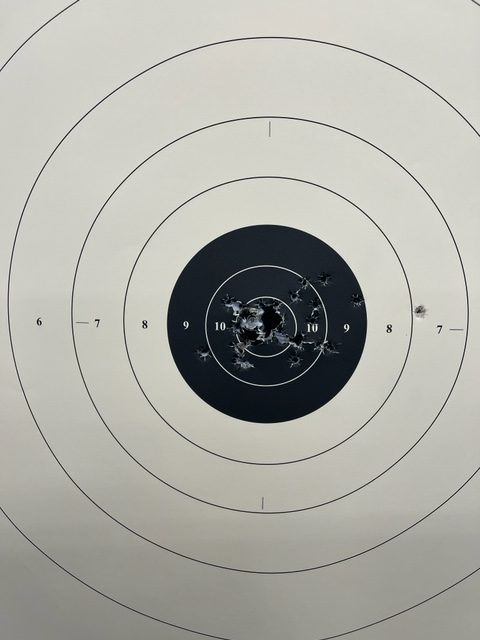 I called the one flyer to the right. That was the fault of my poor trigger press, not the ammo.

The Omusha factory has been around for a long time.  According to Tom:

“In World War II this factory produced 45% of the .303 ammo used by British Imperial forces, totaling 768 million rounds produced
during the war. “

The price for a case of 1000 rounds is $316, but that doesn’t include tax or shipping.  When those costs were figured in, my case cost me $380.  It’s great ammo for that price.  With 115 grain CCI Blazer  aluminum case running about $350 per 1000, I’d much rather pay a few dollars more for brass case 124 grain ammo that functions reliably and is demonstrably more accurate.

If you are looking for a new source of ammo, check out Omusha.