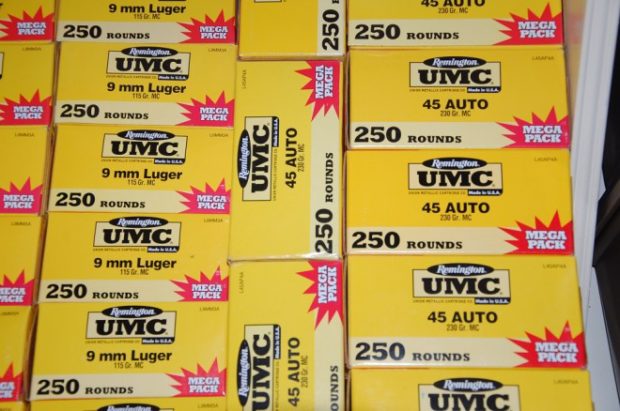 With the recent COVID-19 pandemic and lots of civil unrest, I’m getting more and more people asking questions about stockpiling ammunition.  Online ammunition outlets have been sold out of popular products lately.  Ammo availability at local gun stores is starting to increase, but prices are high and many stores are limiting the amount of ammunition an individual can purchase.

How many rounds should you have?  Should you stockpile self defense ammo or cheaper full metal jacket ball rounds?

The primary factor is “what event are you stockpiling for?”  Most folks are planning for some type of societal collapse/zombie apocalypse.  That’s fine; but if things get that bad, exactly how many thousands of rounds of that high dollar hollow point ammo do you think you will fire before you get taken out by a team of criminal invaders?  Your best bet in such a situation is to lay low and NOT draw attention to yourself.  That strategy doesn’t require thousands of rounds of defensive ammunition.

Think about it more logically.  In any collapse/crisis situation, there will be a lot of non-gun people pulling old/poorly maintained or cheap junk handguns out of shoe boxes and attics to defend their families.  Are those guns more likely to feed ball ammo or the state of the art hollowpoint?  Ball ammo has some important utility here.

Even more importantly, the purpose of an ammo stockpile might not be to be prepared for the zombie apocalypse.  It might be to prepare yourself for an ammunition sales ban or as a hedge against future supply shortages.  If you are stockpiling for a stash of practice ammo, ball is fine.

Here’s my view of stockpiling ammo…

I think that in the face of the multiple failures the anti-gun crowd has endured with regards to creating more firearms restrictions, their next target will be to ban or severely curtail the purchase of ammunition.  A ban on lead containing “environmentally harmful” ammunition via EPA rulemaking is far more likely to be enacted than a gun control bill is likely to be passed by congress in the current political environment.  I still want to have practice ammo in the event of such a ban and don’t want to pay the dramatic price increases that may result from it.

My goal in stockpiling is to put away enough ammo that I will have a LIFETIME supply of practice ammo.  I recognize that I’m not likely to be able to stockpile enough ammo to feed my current consumption rate of 500-1000 rounds a month for the rest of my life.  But do I really NEED to shoot 1000 rounds a month?

Probably not.  I could likely maintain 80+% of my shooting skills firing 100 rounds a month.  Stockpiling 35,000 rounds of ammo isn’t nearly as difficult as stockpiling 350,000 rounds.

While I have a fair amount of quality defensive ammo put away, the majority of my stash is ball ammo.  It will probably work just fine if pressed into an emergency defensive role when the zombies attack.