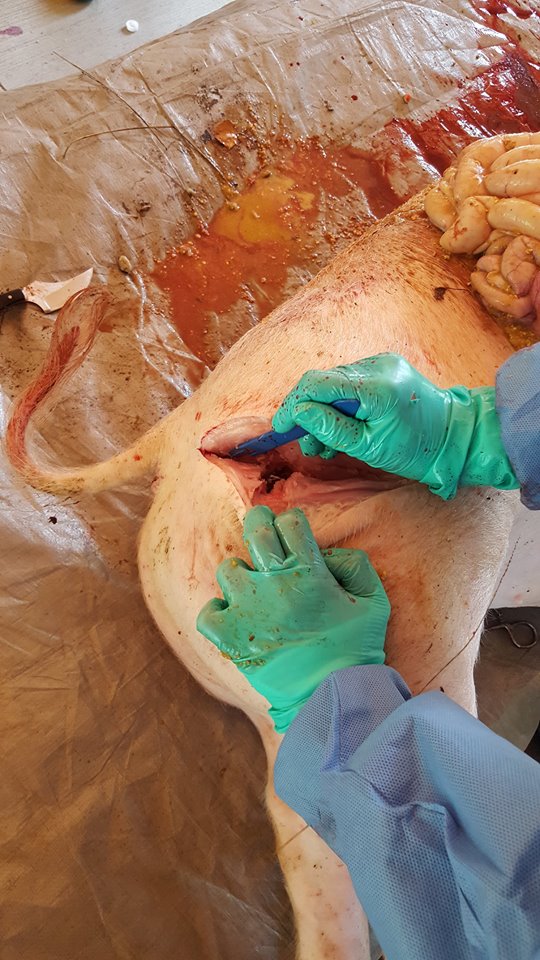 I’ve written in the past about some ballistic testing I observed at one of the past Rangemaster Tactical Conferences I attended.  The bottom line of the article was that one shouldn’t depend on expansion from short barreled pocket pistols.

That article generated all kinds of emails and questions on Facebook.  Most questions centered around the issue of handgun gelatin penetration.  Almost all of the rounds we tested penetrated a full 16″ of gelatin.  Folks were asking me why a bullet would need to penetrate 16″ when the heart and other vital organs are only a few inches deep in the chest cavity.

The human body is not a consistent medium.  Muscle, fat, organ, and bone all have different mass, density, hardness, and flexibility.  In general, a bullet will penetrate much deeper in gelatin that it will in human flesh.

The primary reason for the diminished penetration in an actual body is the presence of skin and bone.

Skin is very elastic.  A bullet uses up a lot of energy stretching the skin before the skin actually breaks.  Most ballistic experts believe that the skin itself is equal to one to two inches of gelatin penetration.

We want a bullet that penetrates 12″-18″ of gelatin.  That translates to roughly 6″-10″ of human flesh, depending on the structures hit.

That introduction brings us to today’s topic….

Many people see that a bullet penetrates 16″ in gelatin and they say “that’s too deep.”  The average human body isn’t that thick.  People start thinking a round that penetrates 16″ will drill right through the bad guy and then endanger any innocent person standing behind him.  That’s not how it works.

A few years ago ago, I participated in a ballistic laboratory of a different sort at the Paul-E-Palooza Memorial Training Conference.  Instead of shooting gelatin, we shot (dead) pigs instead.  It gave us the ability to actually see how bullets performed in real flesh and bone.

The three pigs were humanely harvested by their grower, and then shot by instructors at the training conference.  Doctors, military medics, and a veterinary surgeon then conducted necropsies of the shot pigs for the class.  Everyone actually was able to see what bullets do to real tissue.  It’s very different than what happens when you shoot a block of gelatin.

The pigs were not fully grown.  I would estimate that they were somewhere between 80 and 100 pounds each.  The width (side to side) of each pig carcass was less than 12 inches.

Instructors shot the pigs for a distance of approximately seven feet away.  They shot with all of the following calibers:

If you guessed NONE you would be correct.  Not a single round (including the rifle and shotgun rounds) fully penetrated the pigs.  Most wound channels were six to eight inches deep.  Those that hit larger bones terminated even earlier.

This really shouldn’t be a surprise to any of my long time readers. Results were similar to  the pig wound ballistics lab held during the previous PEP Conference.
In that lab, instructors shot the pigs with: 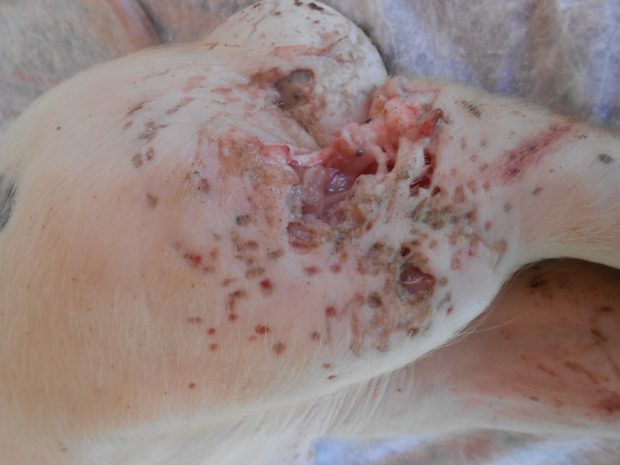 What does this mean for you?

It means that you shouldn’t worry so much about your round passing through a bad guy and hitting someone else.  With quality hollowpoint bullets, that rarely happens.  In most police shootings, medical examiners recover the bullet just under the skin on the far side of the suspect’s body.  If the round does penetrate all the way through, it is often found caught up in the suspect’s clothing, not having enough remaining energy to penetrate even a couple layers of cloth.

Don’t buy rounds that fail to penetrate 12″ of ballistic gelatin.  The FBI set that standard for a reason.  Twelve inches of gelatin penetration is barely enough to reliably hit the vital organs on a human body, especially if the round is fired cross body or has to penetrate a substantial bone before reaching vital organs.

Definitely avoid the gimmicky rounds like the extremely light weight hollowpoints that are designed for massive expansion.  Avoid Glasers, RIP,  or MagSafe rounds that only penetrate a few inches of gelatin.  In real bodies, those rounds don’t go deep enough to reliably reach the vital organs and may fail to adequately stop a criminal suspect.

Pick a jacketed hollowpoint bullet from a quality manufacturer (I like Federal HST, Winchester Ranger, and Speer Gold Dots) that penetrates between 12″ and 18″ in calibrated ballistic gelatin.  Then stop worrying.  Those bullets are not likely to overpenetrate a human body and cause damage to an innocent person.

Your misses are what will cause damage to innocent people.  Instead of worrying about carrying the latest  under-penetrating “super bullet”, spend your time improving your accuracy and speed so that you can reliably hit your attacker.

Stop worrying so much about overpenetration.  In real tissue, it rarely happens with well designed hollow point bullets.

A surgeon dissecting and exploring a wound channel made by a .45 Colt round at the ballistic lab.