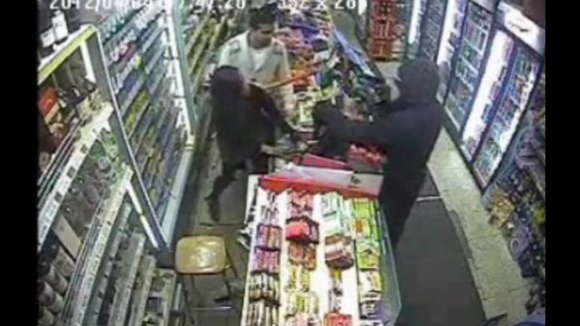 I find it hard to watch the video below…not because it is gory or violent, but because the shopkeeper’s actions are so amazingly inept.  He took an incredible risk for no real return. He’s very lucky he wasn’t killed.

First, go to THIS LINK, watch the video  and read the article. 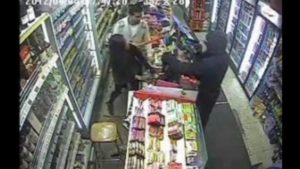 The shopkeeper is confronted by a gun-welding robber.  He initially does something very good; he covertly hits the silent panic alarm.  But then he does the unimaginable…he grabs a small stick of some sort and begins jabbing the robber with it.

He didn’t hit the guy hard in the head.  He didn’t strike to disable the gun arm.  He just poked and prodded as the gunman fired off three rounds (which he later determined were blanks).  What’s worse is that he took such inane actions while his fiancee was standing right next to him.  He wasn’t risking just his own life by acting so recklessly; he was endangering his future wife as well.  He got extremely lucky.  The gunman eventually “got confused” and left the store. 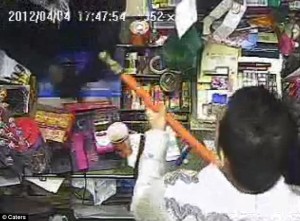 Closeup of the shopkeeper’s “weapon”

This is what the shopkeeper said he was thinking:

“You hear stories of people who get into trouble for hitting people who have attacked them and I kept thinking ‘If I hit him I might be liable in some way. “So I kept on pushing him back and prodding him with the stick and he seemed to become confused,”

My question to you is : “How much do you value your life?”

For me, concerns about liability and unjustifiably hurting the criminal are secondary.   My life comes first.  Even if I go bankrupt paying legal fees or have to spend some time in prison, it’s still better than being dead.  Don’t let intrusive thoughts of liability  occupy your mind when you are fighting for your life.

The even bigger problem is this…

The shopkeeper feels good about his actions.

“I’m definitely feeling good because I was able to protect my fiancee and the business I’ve worked so hard for.”

There is a saying in the tactical community: “Good luck reinforces bad tactics.”  That holds equally true for police SWAT raids or encounters like this where average citizens fight back against robbers.  Because everything turned out OK, the shopkeeper thinks he did the right thing.  He didn’t.

If you are ever involved in a situation like this, here are some things to think about:

– Statistically the safest course of action in a robbery is armed resistance.  Resisting the robbery by using your own firearm will most likely keep you from getting injured.  The next safest option is compliance.  Taking on an armed robber with an impact weapon or your bare hands is one of the more dangerous courses of action.

I can’t tell you what to do.  You have to make that decision yourself.  Think through the possibilities and pre-plan your response.  Know what you are going to do BEFORE the robbery occurs and be ready to implement your plan.

– If you do choose to resist, fight with everything you have.  Half measures put you in more danger!  Don’t poke armed men with sticks!  If the shopkeeper would have bashed the robber in the head with all the force he could muster, the problem would have been solved more quickly…and without putting other people in danger.

– Don’t let concerns of liability cloud your judgement.  Your life is more important than anything else.  Make sure your actions reflect that.  You are unlikely to be criminally charged or successfully sued if you act reasonably.  If you believe you are likely to suffer serious injury or death at the hands of an attacker, you can legally defend yourself with a firearm or other deadly weapon (at least here in the USA).   The coming lawsuit is at best a secondary concern.  Save your life first, so that you can be around to handle the aftermath.  If you die, no lawsuit will matter.

– Do an honest after action self assessment after any criminal encounter.  Take the opportunity to evaluate your actions, figure out alternate strategies, and improve your performance.  Don’t let good luck  reinforce bad tactics!

Look at videos like this one.  Use them to brainstorm options to consider if you are ever in a similar situation.  Plan your response and prevail.