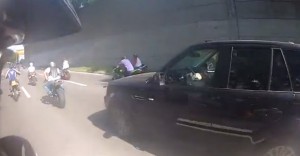 Several readers and students wrote to me last week to ask my opinion of the biker gang attack that occurred in New York City.  If you missed the news story, here is a summary.  In brief, a man and his family were driving on a highway when they were surrounded by a biker gang.  The bikers taunted the man and then tried to force his vehicle to a stop.  The victim accidentally clipped one of the motorcyclists and then sped away with the bikers in pursuit.  After a lengthy pursuit, the man was forced to stop in traffic.  The motorcycle gang broke his windows, slashed his tires and drug the man out of the car, beating and stomping him.  Most of this was caught on video.  Check out the video below to see what happened.

What would you have done if you were the victim in this incident?  Here are a couple of suggestions to consider if you are ever the target of such an attack:

1) Get on the phone to police.  The driver should have instructed his wife to immediately call the police and to stay on the line with them as they tried to make an escape.  The faster the cops get there, the sooner the attack will end.

2) Don’t stop moving.  Even if it means striking one or more of the biker gang, keep moving.  Hitting someone with a car is considered lethal force, but lethal force shouldn’t be hard to justify if you are under attack by a motorcycle gang numbering between 20 and 30 people.  That’s a multiple attacker situation of the worst kind.

3) Try not to get surrounded.  The bikers could have been armed.  Taking fire from 360 degrees is very difficult to counter.  Drive in the far right lane to keep bikers from getting on the side of the vehicle where your wife and baby are located.  If your wife is armed, drive in the far left lane so that she can shoot the attackers while you concentrate on driving.

4) Protect the baby.  Consider unbuckling the car seat if possible and getting it lower down on the floor.  The metal door skins aren’t much protection against bullets, but they are better than the windows.  Getting the baby down out of the line of sight may also cause the bikers to miss seeing it if your car is forced to stop.

5) Train family members to use your weapon.  It’s difficult to drive and shoot at the same time.  If the driver was armed, it would be much better if he could pass his weapon off to his wife so that she could shoot.  Another option is to have a “spare” pistol in the car that is accessible to a trained passenger.

6) Avoid road rage and ostentatious displays of wealth.  We don’t know what prompted the biker gang to choose this man and his family as victims.  Presumably there were many other cars that passed the gang without incident.   What made the gang choose him?  Think about that for a minute.  It certainly isn’t the fault of the victim that he was attacked.  But with that said, the criminals chose him for a reason.  There is likely some signal that he gave that made the bikers think he was an easy target.

Keep cool when driving and don’t do anything that might antagonize someone into an attack, especially when you have a family to protect.  Avoid driving very expensive cars.  The victim here was driving a Range Rover.  Do you think he would be more or less likely to be attacked if he was driving a Toyota Camry?  Blend in.  Don’t stand out.  Driving very expensive cars or wearing expensive jewelry is often viewed as an insult by the criminal underclass who can’t afford such things.  Is it worth driving that expensive car if it gets you attacked?