Imagine being in a shopping center parking lot.  You see an enraged man getting into what appears to be his own pickup truck.  The angry man starts up the truck and begins crashing into other cars, pushing them into a concrete pillar.  What would you do?

A CCW licensee was faced with that scenario.  In my evaluation, he handled the situation in a sub-optimal manner.  He waited until the man got out of the truck and attempted to “hold him for police.”  Our hero drew his CCW pistol and then struck the man with the gun, causing a negligent discharge that fortunately didn’t hit anything important.  You can read about the incident in Concealed Carrier Pistol-Whips Man That Was Ramming Cars with His Truck.

Let’s look at some of the issues involved.

There is a big difference between a terrorist vehicle attack and what was happening in this case.  Primarily, the difference is that in the terrorist attack the vehicle driver is targeting PEOPLE.  This incident targeted unoccupied VEHICLES.  If he was targeting people walking through the parking lot, I could see a rational argument for engaging the attacker with gunfire until the attack is terminated.  If he’s just hitting cars, I’m going to get out of his way and call the police.  There’s no way I would intervene here.

As you can see from the photo above, an attack like this is self limiting.  It’s only a matter of time before the suspect damages his vehicle, making it unusable.  It sounds like that’s what happened here, causing the suspect to get out of the car.  I don’t see any reason to approach this guy.  If you are the “high responder” type and feel like you have to do something, keep a safe distance and follow the suspect on foot as you are updating police dispatch with his location.

As you do so, attempt to remain shielded from his direct view.  Follow at a significant distance.  You don’t know if he is armed.  I’d try to stay outside of common handgun range and utilize vehicles as cover as I followed the man.  Let the cops do their jobs.  There’s no reason to endanger your life to confront a guy over a property crime, no matter how serious.

Striking someone with your pistol should never be used offensively to gain compliance.  It is demonstrably unreasonable to strike someone in the head with an impact weapon solely because he would not stay still and wait for police.  On the other hand, if the suspect was physically attacking you, it may be reasonable to strike him with an impact weapon in order to defend yourself.

When striking with the pistol, either punch with the muzzle or hit the person using a “ridge hand” like hooking strike with the top of the slide. These two methods are least likely to jam or damage your gun.

It would be a good idea to occasionally practice these strikes using a simulated firearm and a heavy bag or “BOB” target.  Get a feel for the mechanics of the strike before you have to utilize it under pressure in the real world.

3) Should I hold him for police?

The answer to this question is a definitive “no.”  Unless this person has committed mass murder, you should not be risking your life to hold him for the police.  We’ll figure out who he is when we run the license plate of the vehicle he used in the attack.  We’ll issue warrants for his arrest and he’ll be picked up eventually.  That process risks no one’s life but the officer who arrests him at a future date.  And that cop is getting paid to do his job.  You are not getting paid to hold a bad guy against his will until the police arrive. 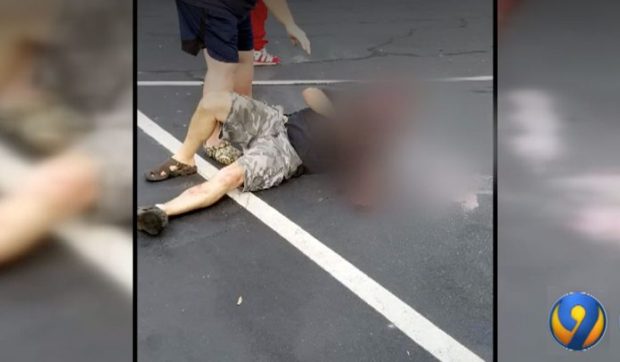 Look at the photo above.  Does that look like a safe place to be relative to a violent attacker?

You are armed.  As far as you know, you attacker is not.  The firearm is a weapon that allows you to deliver force from a distance.  Why would you get close enough to allow the suspect to attack you physically when you have a weapon that will allow you to defend yourself at a greater distance?  That is a poor use of tactics.

Maximize your advantage.  Don’t close with this attacker.  Don’t try to “hold him for police.”  Let him go rather than risk your personal safety.  The medal you get for being killed by the criminal is poor compensation for your grieving family members.  This stuff is serious.  Don’t risk your life for something as inconsequential as a few damaged cars.

“Not my people.  Not my problem.” is a motto more of my readers need to adopt.