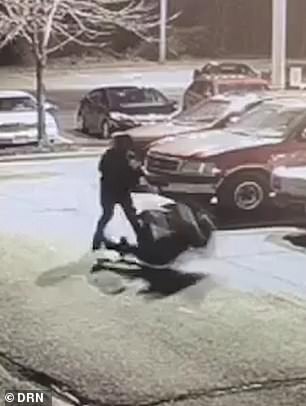 I was scanning my online news feeds yesterday and found this interesting account of an attempted carjacking.  Read about it at the following link:

It was almost one a.m. when a 62-year old woman parked her car in her apartment parking lot and began carrying her groceries inside.  An unknown suspect stalked her from behind, got her attention, and then punched her in the face when she turned around.

The punch dropped the woman to the ground (knocking out several teeth).  The attacker attempted to take the woman’s car keys, but quickly aborted the attack and ran away as a security guard approached the scene.

Watch the short video below.  Caution for extreme violence.

The extreme level of violence that the robber uses makes this one an interesting video to dissect.  Most “normal” people are completely uncomfortable with this type of savagery.  If you can’t bear to even watch the video, how would you be able to successfully defend yourself if you were the robber’s next chosen victim?

1) Target assessment.  The criminal is assessing his likelihood to get rich, whether or not the victim will fight, and whether or not he will get caught by police or good Samaritans.  Her judges that she would make a good victim and he wouldn’t likely be caught or hurt in the attack.

2) The movement patterns to silently exit his hiding place, rapidly approach the victim without being detected, and gain her attention as soon as he gets in attack range.

3) The violent attack intended to make her unconscious so that he can take what he wants without any chance of resistance.

This attempted car jacking could have been prevented at each of those stages. It’s up to you to properly time your resistance efforts and come up with a strategy that matches your skills and abilities.  Here are the questions to ask yourself:

-What would you do to reduce the chance of being targeted?  How do you “fail” the attacker’s interview?  What physical actions can you take that might make a potential attacker think twice before choosing you as a victim?

-What about if the attack has begun?  Could you defend yourself physically?  Could you access a weapon?

Most of you reading this article will ignore the first two questions and immediately jump to the third.  I know a lot of you would say “I’d just shoot him”. I have no problem with that response. The problem happens in the decision making process. At what point will you recognize the fight is on and draw your gun? How are you going to get to it quickly so that he doesn’t foul your draw or take it away from you? Do you think you can still draw and shoot after taking that big punch to the face?

The woman here had less than a second between the time she noticed her attacker and the time she was hit.  How is your sub-second draw from concealment when carrying bags of groceries in your hands?

What’s the solution?  The solution isn’t cutting 2/10ths of a second off your draw speed.  The solution isn’t spending a year in a boxing gym to learn to take a punch.  Although both solutions are beneficial, the true solution here is in recognizing the attack and preventing it.  If you can avoid going toe to toe with someone like this robber, you’ve already won.  Focus on answering questions one and two.  Those will give you the greatest return for the amount of time you will invest.

This woman’s best chance of avoiding the attack is to take notice of the attacker during his target assessment or movement phases. Learn from her mistakes.

– Do you ever drive around the lot before parking to assess any potential threats?

-Do you park in a manner that reduces your chance of being victimized?

-Do you scan for threats before exiting your car and regularly when walking to your destination?

-Do you have a weapon in your hand or easily accessible when walking through potential attack zones late at night?

Most people don’t get it. The average person expects that criminals will have the same sense of compassion and morals that “normal” people have. In my experience, that usually isn’t the case.  This video shows an example of that.  Violent criminals have made a choice to commit a crime.  The criminals will destroy anyone or anything that interferes with their payoff once the attack begins.  You have to stop the attack before it starts.  Recognizing the pre-attack indicators and acting before the attack commences is the best way to win this game.

Don’t expect your attacker to have any mercy.  Don’t expect help from any passersby.  Study the problem.  Do the work.