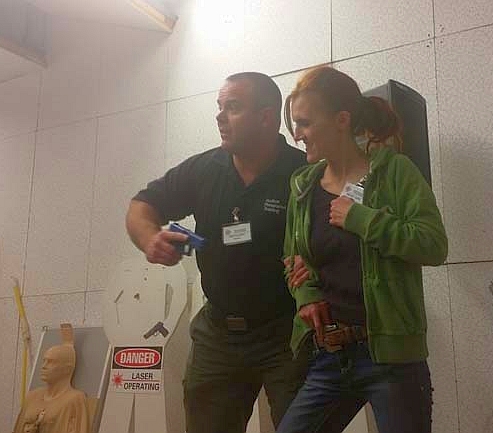 Last weekend I attended my third Rangemaster Tactical Conference.  I was very impressed.  It was a three-day conference and pistol match located at a police training facility in Memphis, Tennessee.  Host Tom Givens from Rangemaster arranged a top tier event that attracted 36 high quality trainers and nearly 200 total students.

I presented a three hour block on “Empty Hand Skills for Gunfighters”.  Despite being in the last slot on Sunday (when many people had left early to travel home) I had a class of more than 25 students.  Everyone seemed to enjoy it.  It was a great group of folks to teach.  Check out the short video clip of some of the material I presented below:

I also shot in the pistol match.  It was a 52 round match that combined basic “draw and shoot” standards with a reactive target scenario.  Total time was added up for each stage and added to the scenario time.  I was happy with my performance, ending up in the top 20 out of 136 high quality shooters.

Chuck started out his presentation by identifying the symptoms of a person experiencing excited delirium and the range of drugs and mental illness that can contribute to the condition. Seeing people under the influence of excited delirium is fairly common in police work. Chuck made the point that armed citizens need to recognize the symptoms as well, if only to avoid people exhibiting it.

One standout of the presentation was Chuck’s recommendations for use of force considerations for subjects experiencing the condition. Drugs causing excited delirium block pain receptors. Pressure points, striking, and impact weapons not as likely to work. Tasers, LVNR, and team tactics are the best way to handle people with excited delirium.

Paul presented an excellent three-hour block on simple, easy to perform weapons disarms. I’ve done a lot of work in this area and I still learned quite a bit. Paul’s in hand and in holster weapon retention techniques are some of the simplest and most effective I’ve seen anywhere. Paul’s technique for in-hand pistol retention is simple and works well. I’m going to steal it and use it in my classes.

Craig Douglas of set up a simunitions training scenario for the students. Each student went through the same scenario:

The scenario was supposed to occur in a grocery store parking lot. The student is a approached by a woman carrying a doll that is supposed to signify a baby. The woman begs the student to help her as her “baby” is choking. As the students deal with the woman and choking child, the child’s father appears. The man is open carrying a pistol on his hip. He begins arguing with the woman, accusing her of being a bad mother. The man escalates his assault, slapping the woman several times in the face. The woman responds by drawing the man’s openly carried pistol and shooting him with it.

It was a complex scenario. Take a moment to consider how you would handle it. What would you do?

Only about four students were smart and disengaged without gunfire.

It was odd watching all the varied responses. Some students actually stated “I’m sorry, but I’m not going to help a woman with a choking child. It could be a complicated criminal ruse.” That’s certainly true. That’s the safest thing someone can do, but as Craig said “I wouldn’t want that guy for a friend.”

It reinforces the idea for me that most of our gun students really need to work on social skills before they need to take their next carbine course. You really wouldn’t help a desperate mother with a choking infant in a store parking lot because you fear for your safety? Come on folks. While there is certainly a small risk of getting set up by a ruse like this, is it truly likely? It’s a dick move not to help out in a spot like this. If it’s a set up, you deal with it. That’s why you train.

Living life and being a happy, healthy, social person involves taking some risk. If you won’t leave your house and prefer to dryfire in your basement instead of helping out a dying infant, you seriously need to reconsider your priorities. You may be safe, but you’ll end up a safe miserable person who is detested by everyone you meet. Don’t be like that.

The students who shot here may have been legally justified, but it probably wasn’t a good idea. You just don’t have enough information to make a good decision in a scenario like this. To shoot in defense of another requires that the victim hasn’t done anything to bring the troubles upon herself. Keep that in mind before jumping into a domestic scenario like this. It’s best to keep yourself safe, seek distance and cover, and then call the police. Getting involved in a domestic spat could have some serious negative consequences.

Scenarios like these are critical. If you haven’t done training like this, you are missing out. Take a class that has some scenario—based interactions. It will take your defensive game to the next level.

Chris is an impressive instructor with whom I’ve trained before. He presented a block of material designed to bring a novice student quickly up to speed with the shorter-bladed knives that people commonly carry for defense. I can’t imagine a programs that would accomplish the goals better. I highly recommend the training. Students became very effective at creating and maintain separation from a criminal attacker using the small blade in just a couple hours of training.

– The next wave of terrorism will be fighting for political and economic control of urban areas. As governments fail to meet the needs of the urban poor, these urban dwellers will provide the support base to allow the terrorists to function.

– Criminal organizations looking to make money by employing short term insurrections to corrupt or undermine what little authority the government has in these areas. The criminals avoid publicity and have exfiltration plans. This is different from traditional insurgencies that are working towards long term regime disruption driven by ideology.

– “Lone Wolf Terrorists” are NOT lone wolves. They feel they are united with others in the spirit of ideology. They often receive both material support and information from the “parent” organization.

The ideas Dr. Topper presented mesh well with the recent article published on the Guerrilla America Blog.
Dr. Topper recommended the following references for further study “A Troublesome Inheritance” by Nicholas Wade and “The Starfish and the Spider” by Ori Brafman

The presenter (who would like to remain anonymous) is a recently retired high level career intelligence officer having spent more than three decades in the highest level of government operations in the Middle East. He has personally interrogated thousands of detained Jihadist soldiers. His lecture contained two topics. The first was about how our training doesn’t really reflect the reality of the combative situations we face. The second was “The reality of global terrorism.” This was my favorite class in the conference. Some of his quotes and points:

– “Physical fitness, critical thinking skills, quick recognition of evil, and avoidance have a bigger role in your survival than your gear.”

– Your training resume can haunt you. “Those instructors are going to be following you to court for the rest of your life.” We need to rethink the priority of training with the “tactical celebrities.” We should instead invest our training dollars with trainers who teach real life applicable skills.

– Watch your “digital exhaust.” Comments you make online will follow you forever. Be careful what you write and say.

– “A 15 year old with an AK that sees you first trumps all your high speed training.”- Master Chief JD Stevens

-“If you aren’t training in high pressure events where you get tested, pressured, bloody, and sweaty, it’s the reason you aren’t very good.”

– “Having truly ambidextrous reflexive gun handling skills is a game changer on the battlefield.”

“Tachy psyche effect” is a really good word for saying “you suck.”

As a fan of small .22 handguns, I was pleased to hear the presenter talk about some of the weapons and gear he carried in hazardous assignments overseas. He was a strong advocate for not worrying too much about calibers and brand preferences. “I carried a snub in .22 in a codpiece holster when I was running around Beiruit and figured I was going to get snatched off the street and bundled into a van. I can get that thing out and start working contact shots pretty well.”

The second part of his class discussed the realities of global terrorism that isn’t reported in the mainstream news media. His general theme was that terrorism will increase worldwide, but that there isn’t too much we can do about it. He was less worried about coordinated terrorist attacks in the USA. It’s not that Jihadi terrorists don’t want to attack the USA on a grand scale, they just have limited capabilities. General preparations for a domestic active killer scenario will ensure that the average citizen is ready for any kind of terrorism he is likely to encounter domestically.

– “Global Jihadism has been on a steady increase for 60 years. I don’t foresee any single event that will stop this raise. We can’t “go to war” with the world of Islam. We can’t kill 1.7 billion people.”

– Muslim frustration and humiliation is a partial explanation for terrorism. The humiliation is rooted in politics rather than sex (they aren’t looking for 72 virgins) and what is written in the Koran. Their frustration is with their lot in life and they are looking for adventure and accomplishment. The only means they have to accomplish that are on the battlefield. The Koran is not often read or understood by fighters at the ground level. They have established a resistance movement to attack and discredit the social structures that have held them down for so long.

– “They are the architects of poorly conceived operations that are only successful because of the elements of surprise and audacity.” That’s why we have problems inderdicting them. THEY HAVE NO PLAN. You can’t interdict something that doesn’t exist.

– Their targets are completely inconceivable to you. They are well thought out, but not for reasons you understand. It is essentially impossible to predict where terrorists will strike. The terrorists will be well armed and will have some experience, but not likely as much experience as our police/military.

– They tend not to spend time planning egress. That’s where some opportunities lie in apprehending the terrorists if they are not killed in the initial action.

The presenter recommended the following resources to understand training issues and current global terrorism trends: “Shots Fired in Anger” by John George,  The Derek Harvey blog,  and an article in the Feb 16, 2105 New Yorker magazine.

Rangemaster is one of the best training conferences in the country.  I’ll be back for sure next year.  I hope to see some of you there! 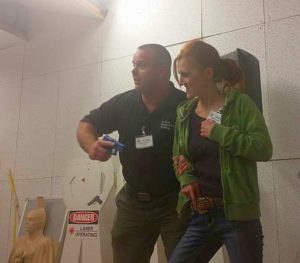