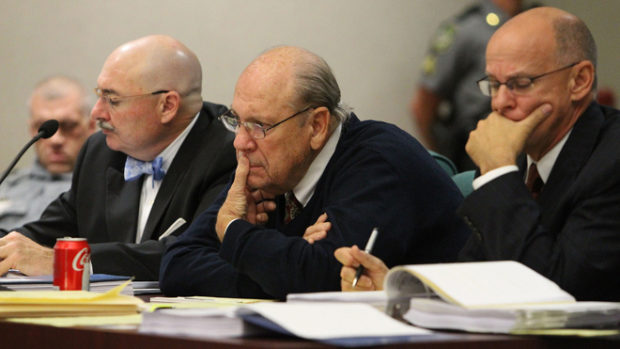 By now you have all likely seen the news reports detailing the confrontation between a retired police Captain and a person using his cell phone in a Florida movie theater.  The confrontation escalated and the retired cop shot the man after he was attacked.  Interestingly, the entire incident was recorded via infrared video in the theater.  If you want more background on the incident, check out the article HERE.  Otherwise, watch the short video below:

So, what do you think?  Was the shooting justified?

In order to be justified, the shooter would need a reasonable belief that he was likely to be seriously hurt or killed.  That reasonable belief is evaluated by using the concepts of Ability, Opportunity, Jeopardy, and Preclusion.  Let’s go through them all and see what we have…

Ability– Did the attacker have the ability to seriously injure or kill the shooter?  I believe he did.  The man was much larger and younger than the retired police detective.  He was also reportedly very angry and volatile.

Opportunity– Was the attacker at a range that he could use his bodily weapons to cause serious physical harm?  The answer to this one is “yes” as well.

Jeopardy– Was the shooter here in any true danger of being seriously injured or killed?  That’s where we have a problem.  The shooter testified that he thought he was struck and was afraid that the attacker would “beat the shit” out of him.  Video analysis seems to show that the strike was actually the angry man throwing his cell phone at the shooter.

Grabbing a bag of popcorn and/or throwing a cell phone would not lead most people to believe that they would likely suffer serious injury or death.  In fact, a single punch probably wouldn’t be enough to meet the standards in most situations.  Thus, a reasonable person would not fear that he was in true jeopardy here.  Without the element of jeopardy, the shooting would be ruled unjustifiable.

Remember, jeopardy is judged from the perspective of the “reasonable man.”  Being in jeopardy is something that is LIKELY to happen, not something that could POSSIBLY happen.  There’s a big difference.  It’s theoretically possible that I get attacked by flying monkeys when I walk out of my door tomorrow, but it isn’t likely.  You need to decide if a reasonable person would consider that you were LIKELY to be in serious danger before you can prove the jeopardy component.

One possible defense that would muddy the waters a bit and would help the defendant is that if the shooter testified that in his extensive police experience, he saw numerous crimes committed by attackers who first threw something at the defender as a distraction to facilitate the attack.  If the shooter here believed that throwing the cell phone and popcorn was being used by the attacker to set up a physical attack, he may be able to prove the element of jeopardy.  This is, in fact, a relatively common street attack.

Preclusion– This is the concept of “What else could the shooter have done to avoid the confrontation?”  For more information about this idea, see my article HERE.

Preclusion is a real problem in this case.  A reasonable person would have simply moved, called the police, or left the theater if he was feeling threatened.  The shooter here could have done all of those things, yet chose to shoot instead.  The jury is likely to have a real problem with understanding why he stayed around and shot the attacker rather than just leaving.

The shooter’s own admission of “If I had it to do over again, I would have moved.” will likely be devastating to his case.

As an armed citizen, how do you avoid incidents like these?

The shooter here appears to me to have been enraged and letting his emotions overrule his rational thoughts.  Staying calm in stressful situations is a learned skill and everyone who carries a gun for protection should have it.  Letting the ego get in your way will likely lead to poor outcomes.

Mental pre-planning may help too.  If you had previously visualized such an event and planned the best response (leaving), it would be much easier to implement the planned response than to develop a solution on the fly, especially when under stress.

One final thing to think about is the development of empty hand physical skills or the use of a less lethal weapon.  “When all you have is a hammer, every problem looks like a nail.”  When you only have a gun and no other weapons or empty hand skills to back it up, every problem will have a shooting solution.  That’s far from optimal.

The shooter here was assaulted.  The problem is that the assault probably would not have been considered to be a lethal force attack.  If the older man had defended himself physically or used pepper spray against the younger, stronger man, his actions would have probably been justified. It’s important for shooters to have other options.  If you carry a gun, you should also be trained in empty hand skills and have an alternate, less lethal weapon available for attacks like this.

I think the shooter here made a mistake.  He’s likely to go to prison for that mistake.  It’s up to you to make sure you don’t follow in his footsteps.

2021 Update- After years of legal wrangling with Mr. Reeves being on house arrest during the duration, the trial date for the second-degree murder charge has been set for April 2021