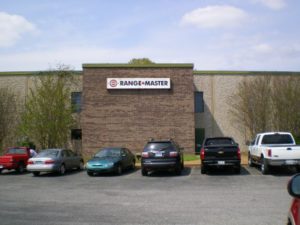 Last weekend I attended my first Rangemaster Tactical Conference.  I was very impressed.  It was a three-day conference and pistol match located at the excellent Rangemaster training facility in Memphis, Tennessee.  Host Tom Givens sent out his summary of the event:

The Tactical Conference and Polite Society Match was conducted Friday through Sunday, March 1-3 at Rangemaster. The event was a huge success.

One hundred and fifty trainers, attendees and Rangemaster staff spent three days training and testing their skills. We had 25 presenters this year, who gave two-hour blocks of instruction on everything from immediate field trauma care, to criminal psychology, to flashlight searching and shooting techniques and tactics, to setting up a training program. There was hands on training in weapon retention/disarms, knife defense, and managing unknown contacts, including some Sims and airsoft scenario work against live opponents. The shooting match involved an “active shooter” theme, requiring both accurate shooting and fast decision making. Good stuff!

I presented a two hour block on “Empty Hand Skills for Gunfighters”.  I had originally capped the class at 20 people, but when about 60 students showed up with training guns wanting to learn, I couldn’t turn them down!  I ran the huge class and everyone seemed to enjoy it.  It was a great group of folks to teach. 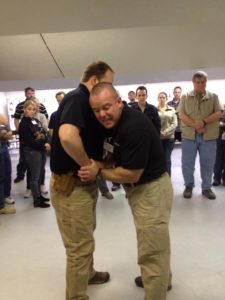 Teaching how to close the distance and stop the draw with Caleb Causey from Lone Star Medics as my attacker.

Besides teaching, I also attended several classes as well.  Below are some quick summaries and some of my notes from each class:

The class was an overview of the most current research into human performance under life and death stress.  I was very impressed with John’s research and presentation.  He killed some sacred cows that have long persisted in the training community!  His presentation focused on answering  “The Great Question”.  Who wins and who loses in personal combat?

He noted that there are extreme variations in human performance in armed encounters.  Some participants do extremely well.  Most do not.  Did you know that 85% of police officers feloniously killed did not fire their weapon?  Many gunfights are won by people who barely survived.  They simply sucked less than their opponents.

John’s presentation was so in-depth, that I am going to write a separate blog post about it.  Look for it on Monday.

Both classes reinforced the need for teaching the basic TCCC protocols to all shooters.  I’ve been to a lot of these kind of classes (and teach a few as well) so most of the information wasn’t new.  It was still a good review and I picked up a few good tidbits of information:

Troy’s presentation began with the statement: “What gets shot is far more important than what it gets shot with….”

He continued on to describe what is called the “Trimodal Death Distribution”:

Immediate– not breathing from brain/ high cord injuries, Rupture of heart, aorta or great vessels- very few can be saved…best solution DGST- “Don’t get shot there”

As first responders, we can’t do much about deaths in the first two categories.  Our efforts are best used to save people who are seriously injured in the “second peak” category.

All of these are essentially the same.  Use the one that resonates most with you.

Another important concept that bears repeating is that: “Pain is the Patient’s Problem”. The interventions that you perform to stop traumatic bleeding are likely to cause pain to the patient.  You need to inoculate yourself against being affected by your patient’s screams and discomfort in order to focus on saving his life.

Troy recommended the book “Beating the Reaper” by Dr. John Meade.  “Doc K” knows the medic who c0-wrote it and vouches for his abilities.

One new technique presented for when you want to move a casualty while under fire is called the“Neck Drag”.   Handcuff or cravat wrists of victim together.  Put victim on back and loop their hands over your neck.  Crawl forward.  It is slow, but keeps you very low to the ground.  I’ll have to give it a try.

Doc K mentioned something that I hadn’t thought of before: When entering a public area, most tactically trained people automatically scan for exits and points of cover.  He suggests also scanning for items that can be used for improvised medical equipment.  Good advice.

He also mentioned personal knowledge of a case of a military pilot in Afghanistan who had a tourniquet in place for 18 hours without damaging the limb.  So much for “life vs. limb”!

For those of you looking for a wallet sized personal med kit, here are Doc K’s recommendations:

Shane has multiple factory armorer certifications and extensive experience as a police armorer.  His class consisted of introducing the products he likes best and giving useful tips for keeping your gun running.  Here are Shane’s recommended products (the numbers listed are Brownells part numbers):

– Put Brownells Mag Slick on inside of all magazines…can also use Dupont Teflon Dry Film lubricant from hardware store.

Claude’s presentation included advice about how to include your family members in your safety plans.  Some random notes from the class:

Most people’s training involves the trainee and one training partner (or target).  That is reminiscent of two dueling old west gunfighters…and just isn’t realistic.  There are generally other people involved in real life…almost everyone will have friends, family members, children, or co-workers with them in the event of an attack.

The family safety plan should be written, rehearsed, and trained.  Claude suggests 30 minutes every three months on a pre-set schedule.

“We aren’t normal. To us, this is interesting.  To most other people it is boring or somewhat intimidating.  If you can change any of these techniques into a game, you will get better results.”

Integrate cell phones into your planning.  Can you dial 911 on every one of your family members’ cell phones?

Claude also posted all of his PowerPoint slides from the program HERE.

Besides these classes, I caught parts of classes taught by Craig Douglas, Steve Moses, and Massad Ayoob.  All were excellent!  This is a great training event and a true bargain at less than $100 a day!  I hope to see all of you at Rangemaster next year!