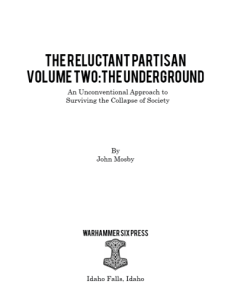 I am hereby providing all appropriate “trigger warnings” for those of my readers who can’t handle a little coarse language.  The last time I reviewed one of John Mosby’s books, I was deluged with emails about the adult language present in some of the book’s passages.  Don’t send me that shit.  I don’t want to read it.  If you are such a pansy that you will allow mere WORDS to offend you, don’t read any farther.

For those of you unfamiliar with “John Mosby”, here is his bio as posted on his blog:

“John Mosby is a former U.S. Special Operations soldier who writes about preparedness, warfare, and Vikings. He’s a husband and father, and lives with his family somewhere in the mountains.”

I’ve been a long time fan of Mosby’s writing and think that his first book was absolutely brilliant.  I just finished Volume Two and I continue to be impressed with the quality of information he is providing.  The second book is 345 pages and written in a slightly larger font than the first one.  It’s packed with information, but isn’t quite as dense as the original.  That’s OK.  The content in the second book isn’t meant to serve as a military tactics manual like Volume One.  Instead of organized fighting, fire and maneuver, and team tactics, Volume Two provides advice about creating and working with underground resistance groups in the event of a large scale societal collapse scenario.  It’s a topic that most of us know little about, but one that Special Operations soldiers constantly live as they attempt to train up insurgent forces around the world.

Why would you need to become an insurgent?  Mosby explains:

“There are those of the Neo-Conservative, pseudo-patriotic fold, who will label me unpatriotic—a traitor even —for not blindly accepting the supposed immortality of the government of these United States. These people, secure in their programmed, blindly obedient childishness, ignore the reality of the world around them, seek fairy tale solutions, and ignore the fact that the citizen of Rome blindly accepted the fable of the immortality of their empire as well. My response to those people is simple.

The United States of America is dying. It’s that simple. As you will see, if you do not already understand, there is simply no way to recover at this stage. What we CAN salvage however, is the idea of America—the idea of a bastion of justice, individual liberty, and the natural rights of man. The idea of America, that which made America great, can be saved. Whether it happens, or whether the Great Experiment—the test of genuine republican government as a guarantor of individual freedoms—is consigned to the trash heap of failed idealism, is up to us.

It is the responsibility of those of us who cherish the values laid out in that document, and who wish to bequeath those liberties to our progeny, to ensure that we maintain a safe haven where those values can survive, even as the country that once represented them to world dies. We must be strong enough— physically, mentally, and spiritually—to survive the chaos and fire of those death throes.

To develop that strength, we must first display the requisite moral character to stand up and look at both the present and the future, objectively. We need to be able to see what is happening, rather than what we want to happen, or what our cognitive biases tell us should be happening.”

That may seem harsh to some, but most of you understand that Mosby’s words ring with truth.  When the great social experiment we call the USA fails, in order to survive its occupants will need to stop caring about once great institutions and spend the time necessary to build contacts and relationships with people who genuinely care about their well-being.  Mosby explains:

“But if you realize that they — the people who run the country — are doing things to benefit them and not you, everything makes perfect sense.

If you let go of the idea that these people are supposed to care about you or the country, and you allow yourself to see them as gangs and individuals working to further their own interests, you can relax and appreciate their crafty strategy. Let go of foolish expectations about what these people should be doing. Step back and see them for what they are. Don’t be mad. Don’t be outraged. Be wise…”

Mosby is not advocating anarchy or an overthrow of our current government.  He is just advocating that we be prepared in the event of a government collapse and that we spend the time and currency (both social and economic) to create strong supportive networks that will help us to survive in the event of a economic or governmental collapse.  He draws a lot on the theories of tribalism and those theories make a lot of sense to me.  Mosby again:

“The problem with these late Western values is that they work best as intra-tribal values. They only work when everyone else is connected and interdependent. Fairness and justice and good sportsmanship promote harmony within a community. But at some point, you have to draw that line. You have to decide who is part of that community and who is not.

You cannot play fair with people who don’t care if you get wiped off the map. You don’t have to hate everyone who isn’t part of your tribe, but it is foolish to keep caring about people who don’t care about you. These heroic types are the natural guardians of any tribe, but their heroic natures are wasted and abused when they are asked to protect everyone, even enemies and ingrates and those who despise them.

If Western Barbarians are going to hold onto any portion of their western heritage and identity, they need to resolve these moral conflicts. They don’t necessarily need to abandon morality or moral virtue, but they need to pull in their aegis and become, as in Plato’s Republic, ”noble dogs who are gentle to their familiars and the opposite to strangers.”

Be morally accountable. But only to the tribe…”

The book describes how to create these neo-tribalistic networks and how to maintain them when everything else is collapsing.  In addition to the general networked insurgency advice, Mosby also provides a chapter with excellent advice on using social media to your advantage.  His excellent advice includes:

“Even if someone is security conscious enough to realize the importance of not putting that sort of information, many times it will be their friends or family members that will cause the errant slips of information that destroy their attempts at security consciousness. While there are methods to overcome this, most people simply do not give a shit, or are worried about offending others, and so they don’t do anything to remedy the lapses in security that result from the communications of others.

This of course, is the most common reason I hear stated amongst survivalist for not having a social media presence, such as FB. As we will discuss in the chapter on counterintelligence efforts, this is simple to overcome with even a modicum of effort. The intelligence collection and networking possibilities of a controlled social media presence greatly outweigh the potential risks.”

Mosby also spends a chapter discussing the concepts between choosing to be a “gray man” or a “hard target.”  This advice is sorely needed and very few other folks are providing it.  Many people attempt to cultivate the “hard target” mentality when they really can’t pull it off against “harder target” criminals.  Becoming the “gray man” has significant merit, especially in the context of fomenting insurgency.  Here is a small segment of Mosby’s advice on the topic:

“There are two basic approaches that can be taken towards image projection modification. These are the gray man approach and the hard target approach. While a lot of instructors discuss these in passing, there are actually only a small number that I’ve come across—in the civilian context—that are capable of discussing them intelligently. Most of these—guys like Paul Sharp of MDOC and Craig Douglas of Shiv Works—are experienced undercover narcotics police officers, with formal training, who are quite literally, certified experts on the subject. For most of the other instructors teaching these distinctions, it boils down to them telling you to “like…you know…blend in…with your environment…you know…”

Obviously, this is not particularly helpful. On the other hand, their alternate advice, “look like a bad ass, so people won’t fuck with you,” is actually not bad advice either, but it is still simplistic. We need a way to determine how to blend in with the environment, and a way to determine when to stop blending, and go all barbarian warlord on a motherfucker.

With the hard target approach, it’s actually pretty simple, although it can hardly be called easy. The idea is to become more physically and emotionally imposing, so people are intimidated, or at least respectful, of your presence. It’s really simple: lift heavy weights, eat a lot of calories, and get big and strong. Combine that with some basic training in combatives and gun-handling—so you know that you know how to fight—and suddenly, you will find yourself vastly more imposing to the people around you. Your kinesics will change. Instead of signifying your lack of confidence, you will communicate an unconscious message of “if you fuck with me, I will chop your head off and place it on a spike. Then, I’ll feed your corpse to my pigs.” The confidence, grounded in competence, will be apparent.”

The book isn’t all about deception and insurgency.  The last 1/3 is primarily about firearms, combatives, and tactics.  Mosby talks about the concealed handgun as the insurgent’s primary weapon and goes over a complete training program to become effective using it.  He then does the same thing for the rifle.  The firearms training drills alone are worth the cost of the book.

I truly enjoyed the book and consider it bargain priced.  Its $50 cost is nothing in comparison to the amount of information it provides.  You can order the book at the WarHammer Six press website.  It definitely belongs on your book shelf if you are a serious practitioner of the protective arts.

*I have no financial interest in this book.  The link provided is not an affiliate link and I receive no compensation if you choose to buy the book from the linked site.  I received no financial compensation for providing this review.  I think it’s a good book and want to share its content with my readers.