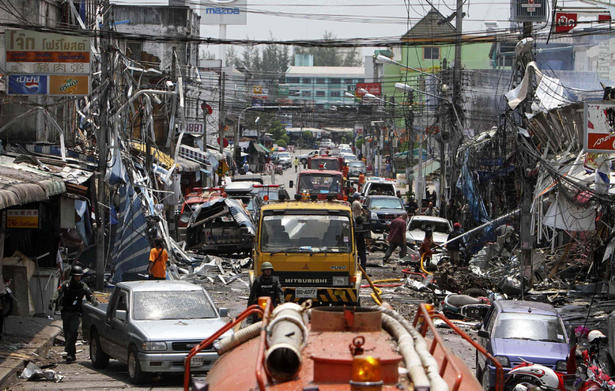 Photo showing the destruction after the referenced Thai bombing

According to the story, the first explosion was a car bomb in a car parked in a shopping area. Then:

“About 20 minutes later, just as onlookers gathered at the blast site, a second car bomb exploded, causing the majority of casualties. Eleven people were killed and 110 wounded by the blasts.”

That’s a secondary device. The first bomb just draws the crowd and the emergency response personnel. The second one does the majority of the damage.

If you are lucky enough to survive a terrorist bombing, get out of the area as soon as possible. Don’t hang around bombing scenes unless you want to be blown up!  It’s more common than not in modern day terrorist attacks that more than one bomb will be detonated.

Often, terrorists hide secondary devices in cars or trucks.  It’s easier to hide a significant quantity of explosives in a vehicle than by placing it outside where it might be noticed. Cars (and in this case, a motorcycle) can hold hundreds of pounds of explosive, are everywhere, and impossible for police to immediately clear.

After a terrorist bombing, get as far away as possible from any parking lot or place where vehicles gather.  Don’t evacuate to a parking lot.   Other likely sites for secondary devices are any locations where luggage is stored or abandoned, and trash cans. Get away from those areas too.

1)If you are in the area of an explosion and survive, your first action should be to get as far away from the initial bombing site as possible. You can be assured that there is likely a secondary device placed and you don’t want to be around when it goes off. get yourself and the people you care about far away from the site, far away from spectators near the site and far way from any cars around the site. As bad as it sounds, I would not advise you to stay around and help. Get away and if you have information, give it to the police later from the safety of your own home.

2) If you do choose to help, focus your efforts on getting the injured people out of the danger zone.  People wounded by explosives have less than a 3% chance of having a spinal injury.  Moving them isn’t likely to make their condition worse.  Recognize that the blast may have damaged their ear drums and given them a traumatic brain injury.  The “walking wounded” won’t likely understand your instructions and act irrationally as a result of the brain trauma.

For my police and medic friends, here are a couple more suggestions….

1) If there is a bombing, it should be protocol to immediately begin searching for the secondary device. Look for bags left unattended and look in trash cans.  Look for any disturbed areas of dirt.  You should also be looking for cars that seem to be overloaded, have a chemical smell or may have smoke coming from them.

2) Do not evacuate people from a bombing site into any type of parking lot. Create a casualty collection point that is in the open and not near any cars.  An ideal site would be a large open field with some type of hard cover between the collection point and the previous blast.  Easy access to roads (and maybe a helicopter landing zone) will be critical to facilitate casualty transport.

3) Pay attention to the terrorist tactics used worldwide.  Several recent terrorists have gained access to secure areas while posing as police or fire personnel.   It would be easy to accomplish here as well. On a bombing call, you would expect officers from other jurisdictions (whom you don’t know) to come help out. It would be easy for someone with a stolen uniform to temporarily gain access to the scene and blow up the first responders.

On a bombing scene, it would be prudent to assign several officers to look for the secondary device and assign several more (with rifles) to be looking for anyone out of place (like a terrorist dressed as a cop). Anyone who seems to be paying undue attention to what’s going on, anyone communicating with numerous other individuals,  or anyone on a cell phone refusing to evacuate merits additional scrutiny.

If you want a little more info on bombs, check out my article here.  Recognize that it’s only a matter of time before we see an increased number of terrorist bombings here in the USA.  This little bit of knowledge may be the difference between your survival and your demise.