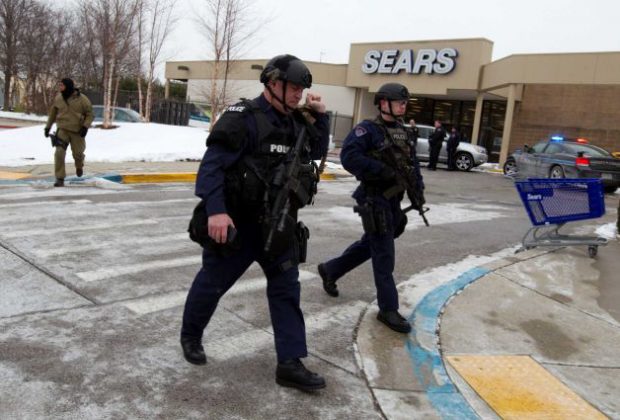 Last weekend, a 19-year old man shot up a Maryland shopping mall, killing two and wounding one other before killing himself.  Five more people were injured in the stampede to get away from the mall.  John Lott has a good summary of the incident HERE.  Additional information from this article came from HERE.

The murderer was armed with a Mossberg 12 gauge shotgun, which he was able to buy legally.  The had no criminal record and had never been treated for mental illness.  He was a vegan skateboarder.

Speculation has been that he targeted the two victims as part of a domestic situation or out of some jealousy issue.  I’m not quite ready to accept that.  He fired 16 shots with his shotgun.  That’s way more than needed to put down the two he was trying to kill.  He also had improvised explosive devices in his bag.  If he just wanted to kill two people, he wouldn’t have needed the bombs.  Here are some additional points to consider:

1) Armament– Like most recent active killers, this murderer carried a long gun and lots of ammunition.  If you are planning on intervening in such an event, you MUST be able to employ tactics that will minimize the offender’s advantage having superior weapons and more ammunition.  I think this fact is ignored at many shooters’ potential peril.

2) Duffel Bags and Luggage- The murderer here carried his shotgun, extra ammo, and bombs around the mall in a duffel bag for more than an hour before the shooting started.  How many people carry duffel bags in malls?  This shoukld have been noticed.  Pay attention to people carrying inappropriate bags or luggage.  That’s the way killers and terrorists smuggle guns and bombs into a “secure” building.

3) Integration of bombs and guns– I’ve spoken about this issue at length in previous articles.  Active killers worldwide have been adding bombs to their arsenals to raise the body count.  You are unprepared to deal with an active killer if you don’t know anything about bombs.  The killer here likely made pipe bombs with flash powder from fireworks.  Many news outlets said that these devices were “primitive” and made it seem like they weren’t dangerous because they were made with fireworks.  That is wrong.  Flash powder has the potential to be even more powerful than the black or smokeless powder usually used.

Watch this video.  It is a pipe bomb we constructed in one of the bomb classes I attended courtesy of the US Government.  This is only 1/2 pound of powder!  Don’t trivialize a pipe bomb made from flash powder!

And finally, a prediction–  As I watch the constant evolution in tactics used by both terrorists and active killers, I can’t help to see that we will soon have an active killer who booby traps his body with explosives or sets bombs on a timer nearby.  Terrorist bombers almost universally employ the concept of the “secondary device,” a second bomb targeting first responders that is set to go off some time after the original explosion.

We see shooters using bombs.  They will eventually fully adopt bomber tactics.  Since most of them kill themselves after shooting, why wouldn’t they rig up a suicide bomb vest to explode 10 minutes after they commit suicide?  It would kill all the responding cops and medics.

If you are police or EMS personnel responding to an active killer event, search the body thoroughly.  Look for abandoned luggage.  Be aware that everything may be booby trapped.  Don’t be hesitant to pull the injured out of the area and wait for bomb squad clearance before you start your investigation.