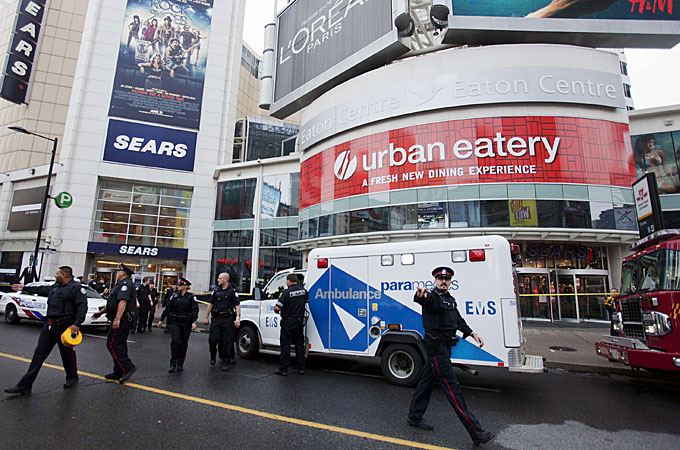 The scene outside the Eaton Centre Shooting

Active shooter events are not strictly an American phenomenon.  They happen worldwide.  The most recent was last night in a Toronto Canada shopping mall.  An unknown man in the food court shot approximately 15 bullets from a handgun, killing one person and injuring seven others.

There isn’t a whole lot of information available yet, but the best news article seems to be this one:

Below are a few quotes from the article and my comments on how to survive a similar event.

1) Your best survival option in an active shooter event is to escape.

“As soon as I heard the gunshots, I ducked under the table.”

“Others who saw the shooting scrambled for cover behind chairs, in washrooms and nearby stores. Still more sprinted for the exits.”

Chairs and tables do not provide cover, only concealment.  Hiding under tables and chairs should be your LAST option.  It simply doesn’t work very well.  Get out!  Don’t hide in restrooms either.  Anyplace with only one entrance and exit should be avoided because of limited escape routes if the shooter makes entry.

Armed resistance is also a viable response strategy, but may get you shot by another armed citizen or responding police officer.  Think carefully before you act.

2) You may have to fight through a crowd.

“All of a sudden a herd of people were just running toward us, a massive crowd of people screaming, running, freaking out,”

Have you considered what you would do in this type of a situation?  Make sure you are fleeing toward safety, rather than blindly running away from danger.  Have an exit strategy planned for every location you visit.

Are you wearing shoes that enable you to run?  Flip flops and high heels make for a slow escape.

You may find that moving right along a wall with your hands held in front of you in a wedge shape may help you more easily get through the mass of people.  But don’t fight the crowd unless you have to.  Almost all stores in a mall have a back entrance for deliveries.  Duck into a store and run out the back door rather than fighting a hysterical crowd.

“Among those injured in the incident, police said a 20-year-old man and a 13-year-old boy were in critical condition, and a woman and a man had serious injuries. A pregnant woman who was trampled in the rush to get out of the mall went into labour and another woman was grazed by a bullet.”

Paramedics will generally not come in to a scene like this until it has been determined that the shooter is neutralized or no longer on premises.  Can you imagine how long it will take for police to search and clear an entire mall?  If you are injured, you will likely be waiting awhile for help.

Unfortunately, some bullet wounds can kill you before help will arrive.  If a bullet severs a femoral artery in your leg, you can bleed to death in 2-4 minutes.  That’s not enough time to get help.

If you are injured, but still mobile, get yourself outside.  It will be a faster route to assistance than waiting.  Most bullet wounds will not be worsened by movement.

If you can’t get out, the first step to battlefield first aid is to stop all massive bleeding.  Now how to improvise and apply both pressure dressings and tourniquets.  Better yet, carry both with you when you are out in public. 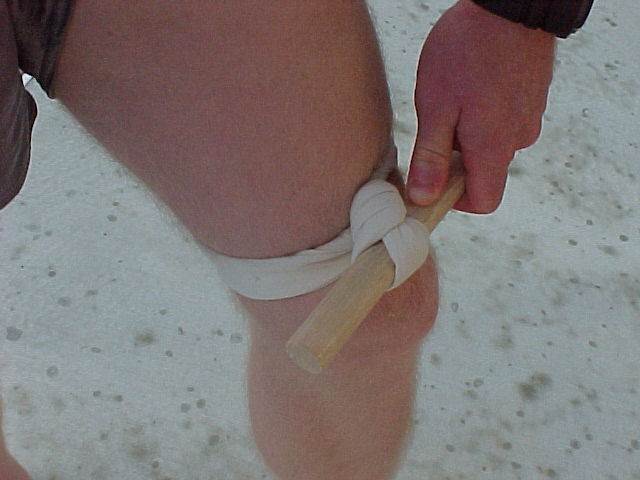 4) The police are not likely to stop the shooter.

“Police are now going through video surveillance and cross referencing witness statements as they try to pull together a clear picture of the shooting and the person who was holding the gun.”

The shooter in this case has not yet been apprehended.  Most active shooting events last fewer than four minutes.  There simply isn’t enough time for police to respond and end the massacre.  Unless there is an officer (or armed citizen) in the immediate area of the incident, the shooter will likely fire his weapon(s) until empty and either kill himself or escape.

You must take care of yourself.   There simply won’t be time for police to save you.  There also will not be enough time to run to your car and grab your rifle and “active shooter bag” you have stashed in the trunk.  You will be forced to deal with the situation with the tools you have on your person right then.

Could you make the shot on an active shooter in a crowd with your normal concealed carry handgun?  If it is a .38 snub or .25 automatic, you likely can’t.  A prudent individual should carry a quality  full -sized firearm, spare ammunition, medical supplies, and a flashlight on his person at all times if he wants to be fully prepared for a situation like this. 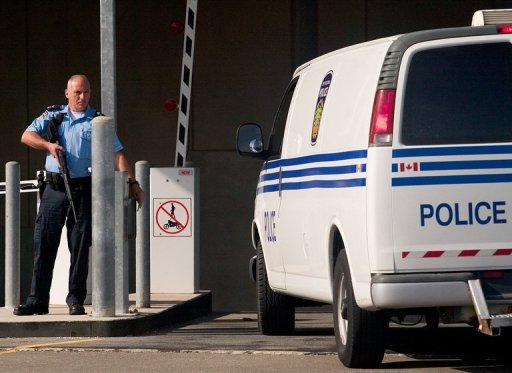 Police on the perimeter of the mall outside. You aren’t likely to be saved by this guy. Take care of yourself!

Think about your best possible response options for surviving an active shooter right now.  If you have a plan,some skills, and a few supplies you will be much better off than everyone else.

This is a short article.  If you want some more information, see my article “Active Shooter Response for the Armed Citizen”.