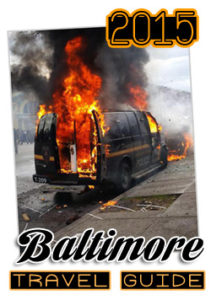 I’ve been reading James LaFond’s writings for a long time.  James lives in inner-city Baltimore, Maryland and writes about the gritty violence that occurs where he lives and works.  James has an unconventional approach, but a way with words and an analytical mind.  I first read James’ book The Logic of Steel, soon after it came out in 2001.  In that book, he looked at incidents he and his friends experienced and attempted to statistically qualify what happened in a knife fight.  I like that kind of research.

James did the same thing with impact weapons in his book Logic of Force.  I think both books are valuable reads for those interested in the science of fighting.

After I linked to a couple of his recent articles, James sent me a message and submitted a guest post for my site.  It’s an interesting piece about how to conduct a personal threat assessment.  James describes threat assessments he performed on himself and three additional individuals in the article below.  While you may never face the same threats as an inner-city crack dealer, the logic James uses to conduct the assessment is useful for performing an analysis of the threats you face in your daily lives.

I wrote this article three years ago and continue to use it as a tool for assessing my changing risks. Practice assessing risks for each member of your family. You know your environment, and your family, and know better than any distant writer or profiler who is trouble in your area. The important part of the exercise is the practice in developing your understanding of a potential assailant’s perspective.

Begin by examining the local ‘crimescape,’ the violence scene in your neighborhood, your workplace, and the approaches to both, as well as any frequented entertainment or shopping venues. Then, once you have identified the predators in those environments which you frequent, look at yourself in the mirror, as if you were the potential burglar, mugger, stick-up man, rapist or murderer, considering the reflection therein as your potential prey. Next identify your top three most likely aggressors. That is going to cover 98% or your potential threats. Your primary aggressor will probably occupy 60-70% of your actual risk.

What about your wife, your children?

Look, the pedophile that will molest your son is a zero threat to you.  He will not even snatch your mother’s purse. Our risks are subjective and even interactive. Below are four examples of threat assessments. I have analyzed myself and three subjects of my study who I have interviewed extensively.

James is a middle-aged white man. He lives in the city as a writer, and works in the county as a supermarket clerk and a boxing coach, earning less than 12K annually.

Ja-wan is a young black man. He lives in the city as a hip-hop recording artist and performer. He works, with James, in the county as a supermarket clerk, earning less than 12K annually.

Both of these men have been repeatedly attacked and threatened by young black men with guns, knives, fists, and athletic shoes.

James’ secondary threat is being profiled and harassed by suburban cops as he walks to his job site. His civil rights are violated by police officers about once a year.

Ja-wan’s secondary threat is being profiled and harassed by city and county cops as he travels to and from work. Ja-wan was once being stabbed by a group of young black men for cutting through their ‘hood.’ When the police responded, he fled instinctively, along with his attackers, not being able to conceptualize a law officer as a friend, savior or even social arbiter.

Ja-wan is more at risk from cops than James is.

James’ tertiary threat is suburban white men in pickup trucks cruising in the county and coming into the city to buy drugs. Such men threaten him with ‘recreational’ group bonding beatings about once per year.

Since white suburban men are terrified of urban blacks Ja-wan has no fear of attack while in the city. Therefore James has a higher risk from this group than Ja-wan. Note, both individuals fear the police more than the suburban white men based on the fact that police are unbeatable adversaries and cannot be escaped from, as they have helicopters, and, unlike suburban white men, are not afraid of dismounting from their vehicles and aggressively pursuing their quarry in the ghetto.

So, James and Ja-wan share a nearly identical threat profile, which makes perfect sense, as they are both artists living in urban poverty and eking out a living in the very same suburban food market. There overall threat level is identical, rated at probable for quarterly attacks and monthly threats. This also makes sense, since the only thing differentiating them is age and ancestry.

The best possible survival plan for these two is to travel together.  This will eliminate their primary and secondary threats. Cops harass James and Ja-wan in different settings, and black urban youths harass and attack them for different reasons. Therefore they can inoculate one another from these threats by their very presence. This strategy also places them at a numerical parity with their shared tertiary threat, the white suburban male in his pickup truck.

Nikki is a petite curvaceous young white woman. She lives in an upscale suburban enclave and works for a Fortune 500 corporation in the suburbs, in collections.

Shynoah is a petite athletic black youth. He lives in the South East Baltimore ghetto and works for a local gang ‘set’ collecting (you might say that he also works in collections) cash on a side-street for crack cocaine that will be picked up in a back alley.

Nikki is a member of the second-most hunted and second-most murdered demographic in America. Her primary threat is from lone men of her own race, either an estranged mate, stalker, or a serial killer. (This dude is very rare, but does play for keeps).

Shynoah is a member of the most-hunted and most-murdered demographic in our society. His primary threat is from a lone man of his own race, probably an assassin.

Shynoah has a geometrically more likely risk of attack than Nikki.  However, once selected, Nikki has nearly zero chance of escaping with her life. Shynoah, with his more practical footwear and attire, finely honed survival instincts, and athletic ability, may very well be able to make it to the emergency room with a few rounds ‘in his ass’ and at least live out his days in a wheel chair. On the other hand, once attacked, Nikki’s body might never be found.

Shynoah’s secondary threat comes from police officers, who will arrest him as a team, making his chances of escape as unlikely as Nikki’s.   He will then be incarcerated in a juvenile detention setting or adult facility. In either case he is subject to rape, beatings and murder at the hands of larger inmates.

Shynoah is more likely to be abducted than Nikki. However, not being so isolated and considered to be an anatomically incorrect victim by most sexual predators, he is less likely to be raped.

Nikki’s tertiary threat is to be beaten by her boyfriend.

Shynoah’s tertiary threat is to be beaten by his handler.

Nikki and Shynoah also share a fourth threat, nearly as likely as the third. They are both fairly likely to be robbed. Nikki will probably just have her purse snatched. Shynoah will probably be held up at gunpoint.

Nikki profiles for a threat a decade, such as an invitation to give her a lift tendered by a strange man. Any of these ‘threat situations’ could be lethal. If Nikki just gave up her job and hitchhiked across the country she would probably not make it to the Pacific Ocean.

Shynoah profiles for a threat a day, one potentially lethal threat situation per week, and one murder attempt or laid ambush per year. If he just gave up his job and hitchhiked across the country he would be far better off.

Although their threats are very similar, if of a far different ‘social texture,’ they can be addressed by lifestyle changes more easily by Shynoah than Nikki. Shynoah is pretty much volunteering for all of this peril. Nikki was born to it. If Shynoah declines to move out of town and get a real job then he just needs to concentrate on honing his behavioral and physical survival skills.

Nikki, though a less likely target than Shynoah, is a far softer one, and must absolutely conduct a thorough assessment of her risks, and practice behavioral self-defense (such as James’ and Ja-wan’s buddy system above) with vigilance. If she does not, than her self-defense strategy, if any, amounts to rolling two dice twice every time she walks out the door, and hoping she doesn’t hit box cars on both die-casts.

For most people that metaphorical ‘die roll’; the perceived safety of hiding within a massive population like some ungulate munching grass amidst the herd while the wolves circle, is the extent of their plan for survival and maintaining their personal autonomy. That is the portion of the self-defense problem that can be addressed by each and every individual, every day of their circumscribed lives.

-James LaFond,
For more advice on not getting got in urban environments, check out Don’t Get Boned. 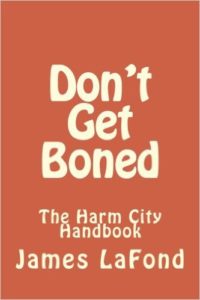 Thanks to James LaFond for writing this interesting guest post.  If you would like to read more of James’ writings, check out his website and his Amazon author page.