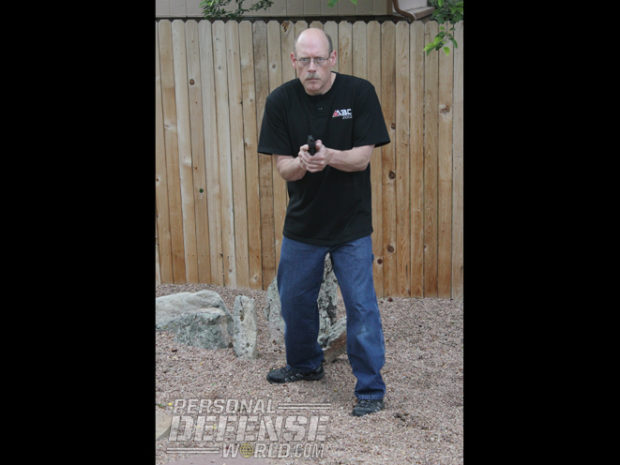 Over the past few years, I’ve posted a few articles from Henry, “The Old Man from Tennessee.”  Henry is 91 years old and lives by himself up on a mountain in rural Tennessee.  Henry has been a lifelong shooter and has a unique perspective on the defensive use of a firearm.  Henry sent me his thoughts about a shooting drill that he really likes and I’m happy to share them with you all.

This is a valuable drill.  I teach this position as the “chest ready” I learned from TDI.  In all my close quarters shooting classes, I make sure I include shooting from this ready position.  It’s excellent for close quarters retention and for doing longer searches where I higher or lower ready would be fatiguing.

Here are Henry’s thoughts on “The Turret Drill.”

Several years ago I acquired a copy of Jim Cirillo’s book “Guns, Bullets, and Gunfights.”  Have read and re-read it many times and always find it full of useful information.  In no way do I consider him a handgun theorist.  Rather I rate him a professional practical gunfighter.  The first chapter of the book is devoted to unintentional discharges.  He says, “From my own experiences and those of my peers, I have come to a very serious conclusion: the firearms fancier, collector, shooter, handler, or instructor, whether expert or not, is the most susceptible to the unintentional discharge of a firearm.” Cirillo says he had three himself.  I can relate to that, as over my 91 years of life I have had three of them too.  Handle guns enough and anyone can experience an unintentional discharge.  Best have the gun pointed in a safe direction if it happens to you. 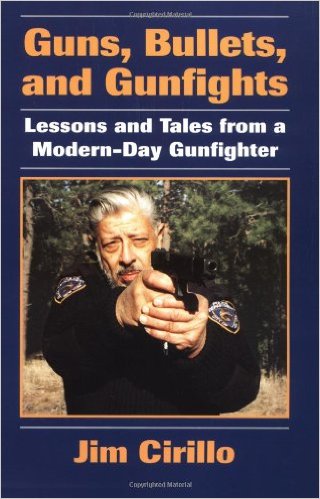 Being primarily interested in the use of handguns in personal defense, a sighting technique mentioned by Cirillo particularly resonates with me.  He illustrates it on page 83 of his book and says:

“I teach the student to use the ‘nose point’ by pivoting from the hips so that he points with his nose.  By always keeping the weapon locked parallel to the ground and perpendicular to his nose he can hit anything he looks at.”

“Turret Drill,” as I call this, is a useful close quarters and low light combat technique.  Think knife or machete man coming at you.  Or maybe some thug with a short piece of pipe or a broken beer bottle.  About ten feet out and closing on you rapidly.  Not a time to stick a gun out in front of you where he might reach it in a jump or two and knock the gun aside or jerk it from your hand.  Not time enough or maybe light enough to use your sights.  Best defensive move, I think, is the turret drill.  Which you have practiced many times, so you can do it instantly without thinking.

The Turret Drill.  Body squared away facing the threat.  Head up with eyes intently focused on the threat. Two handed hold on the gun.  Gun level with the ground.  Elbows locked into the sides of your rib cage.  Gun locked in same vertical plane running from your eyes through nose and mouth and down to your navel.  Your whole upper body becomes a rigid gun platform.  Like a turret in a tank or on a battleship.  Eyes always on the threat, not your gun sights.  If you have to scan to left or right to follow the threat you do not swivel the head.  You swivel the whole upper body, always keeping the gun locked in the same vertical plane as the eyes, nose, and navel.  Whatever the eyes focus on, the gun will automatically be trained on.  You do not have to think about it or look at the gun or the gun sights.

If you need to shoot in the turret drill, do not fire single shots.  Always a burst of two rounds fired.  Always double taps in this drill.  When the adrenaline rush or fear blows your mind, rely on the turret drill and it will get you through the night.

Thanks to Henry for writing about this valuable topic.  For more info on this technique, check out Cirillo’s book and this excellent article from Michael Janich.