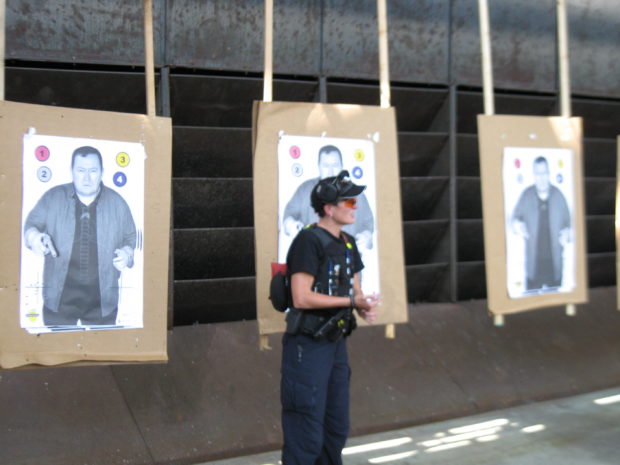 I first met Lou Ann Hamblin more than 10 years ago at a police training conference organized by the now -defunct American Society of Law Enforcement Trainers.  The conference brought together all of the biggest names in the police training business, putting on a bewildering array of classes.  In between classes, several other events were designed to keep us all occupied.  One such event was a shooting match held inside a portable shooting range.

“Shooting match?  I’m there!” After all, I was a full time firearms instructor who shot every day and taught for one of the largest shooting schools in the nation.  In my mind, the competition didn’t stand a chance.

That all changed once I actually shot the match.  While I performed well in the overall standings, I did get beat.  What’s worse, I got beat by a GIRL!  It was almost too much for my fragile ego to take.  How could a 110 lb. woman out shoot ME?  I was crushed.  That is, until I found out the woman who beat me was Lou Ann Hamblin who was teaching classes for the HK Academy at the time.  Back in the day, the HK Academy was the undisputed best in firearms training.  If I got beat by one of their “guys”, it didn’t seem so bad.

Looking back, it was actually a very good thing.  Not only did it reduce the size of my ego, it allowed me to get to know Lou Ann. 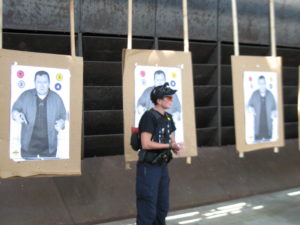 Through the years we’ve seen each other at the various IALEFI, ILEETA, and ASLET conferences and shared notes on some teaching techniques.  She helped me with the structure of a police bicycle patrol class I taught for the state police academy.  I helped her with some close range disarming techniques.  She came down to TDI and took a few of the classes I taught.  We even took a couple of conference classes together.  One class that stood out above all others was a “Handgun Retention in the Ground Fight” class that was taught by an instructor known for being pretty brutal in his classes.  When it came time to pick partners to roll with, Lou Ann chose me; even though I was twice her size.  She told me:

“I want to see if his techniques really work in the worst case scenario.  I don’t have to fight women my size on the street.  I picked you because you are the biggest guy in the room.  If the techniques will work against you, they’ll work against anyone.”

With that statement she earned even more respect from me.

Despite seeing each other fairly regularly, I had never taken a class from Lou Ann.  When I saw that she was coming to teach at our state police academy, I jumped at the chance to sign up.  The class was called “Understanding and Training the Female Shooter.”  I was very impressed. 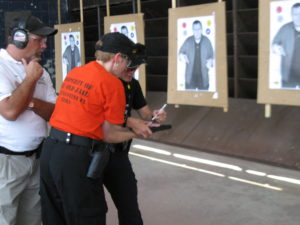 In the past, I have taken some other classes covering the different ways men and women learn psycho-motor skills.  Some were good.  Some were horrible.  Most of what I have learned about training women over the years has been the result of some painful trial and error or through conversations with a long-time former girlfriend who is a very high- performing female police officer.  The information I received in Lou Ann’s one-day class gave me a better understanding of how to train female shooters than 15 years of self study.

One of the earliest lessons I learned about this topic is that men and women respond to verbal correction differently.  I learned very quickly that most men like to be challenged.  If a guy on my range made a mistake, he would often correct himself after I provided some good-natured teasing.  Take, for example, the male student  shooting low and to the left because he was contracting all his fingers at the same time rather than isolating just his index finger as he pulled the trigger.  I could say something like “You aren’t milking a cow!  Isolate that trigger finger and try to actually hit the target next time!”  If I have a good relationship with the student and he knows I’m not being malicious, he will quickly take my advice and improve his shooting. 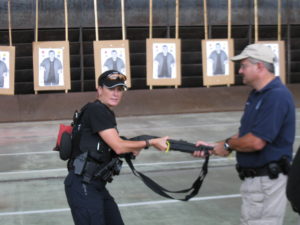 I found that if I said something similar to most of the women on my range, they would be fighting back tears.  It’s just a different learning style.  Most women respond better to praise than challenge.  Like I said, I learned this fact the hard way.  I wish I would have taken Lou Ann’s class years ago!

Here are a few interesting bits of knowledge that I picked up in the “Understanding and Training the Female Shooter” class….

– When measured on a dynamometer, most men have similar grip strength between their dominant and non-dominant hands (as tested in class, my hands differed by only 2 lbs. of force between right and left).  Most women have a HUGE disparity…differences of up to 40% are common.  Would that knowledge affect how you teach off-handed shooting for a female student?  It should.

– Female vision is different than male vision.  Women have less depth perception, but better peripheral vision than men.  It affects how women see the sights on their guns and how far they have to move their head to do an after-action scan.

– Shorter-waisted women have difficulty drawing from many traditional holsters.  Their body styles change which gear works best for them.

– Women are known to be better multi-taskers than men.  This can be problematic in firearms training as some women will try to do too much, taking your suggestions very literally.  If you give most women a list of 10 things they are doing “wrong”, they will try to work on them all simultaneously and won’t make as much improvement as if you gave them just one or two things to improve at a time.

– Because of differing motivational strategies, competition in training will often yield different results between men and women.  Most men really enjoy competition and find it valuable.  Because most women are motivated more by social connection than by ego gratification, competition may not give the same benefits.  Lou Ann suggested using team competitions (where students are partnered up to achieve a goal) when training women.  She believes that women will be better motivated to perform if they are trying to help their partner than if they were trying to win some type of individual award.

– “Women need details…but only when they are ready for them.  Don’t over-explain things in the beginning, but be ready to explain things in much more detail that you ever imagined necessary when she asks for it.  But, she won’t ask for the details if she thinks you are a dick.“

I could go on and on listing what I learned in Lou Ann’s class.   More than anything else, I learned critical tips about how to teach… for both men and women.  Lou Ann covered student motivational strategies, learning theory, optimal language when presenting, and so much more.  I found myself constantly writing down notes as Lou Ann dropped knowledge bombs and demonstrated unique shooting drills all day long.  The class truly improved my instructional abilities, and not just in the realm of training female students.

I would highly recommend this class or any of the others that Lou Ann Hamblin and her business partner Kathy Vonk teach.  I’ll certainly be going back to them for more training in the future.  Their company, LouKa Tactical Training, focuses on providing cutting-edge firearms and physical fitness training for female shooters and police officers.  If you are a police officer or instructor, you may also find Lou Ann and Kathy teaching at large police training events.  Lou Ann does regular work as a master instructor trainer for the International Association of Law Enforcement Firearms Instructors.  Check out their company website (linked below) for more details: 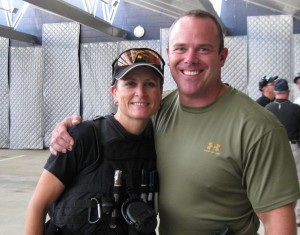 Greg and Lou Ann on the range