With my two most recent articles being about using the .22 for self defense, someone is bound to want to know about the .22 Magnum.  Here are my thoughts on the defensive application of that particular little cartridge.  For what it’s worth, I have my 351 in my pocket as I sit on my back deck and compose this article. 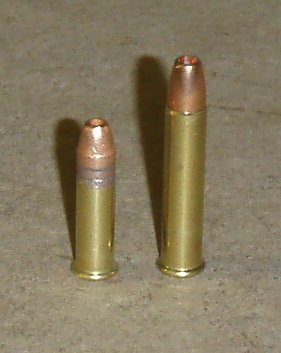 A lot of you are undoubtedly curious about how the .22 Magnum performs as a defensive load.   For those of you unfamiliar with the cartridge, HERE is a blog post from Cheaper Than Dirt about the round’s history and capabilities. 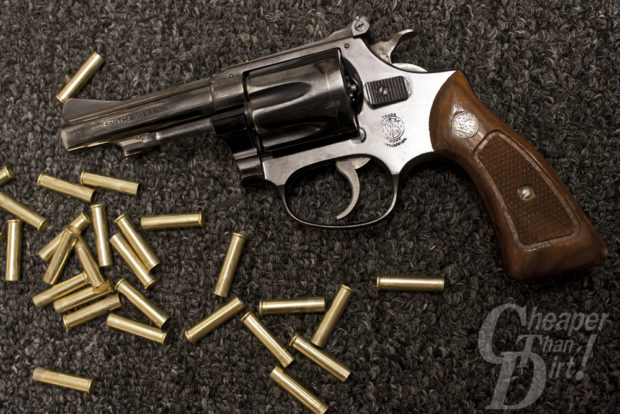 My first revolver…photo from the CTD article linked above.

I still have that gun (now worth over $1000) and I also have a Smith and Wesson Model 351 PD….its updated little brother.  The 351 is a 2″ Scandium J-frame that holds seven rounds.  It’s a handy gun to tuck in the waistband and I often have it clipped inside my gym shorts (with a clipdraw) when I do yard work outside.

I’ve never been able to explain it, but the .22 Magnum has always performed better than it really should.  I have a friend who used a .22 magnum rifle for urban deer control when his city received a nuisance permit to cull its deer herd.  He told me that he shot almost 40 deer with that round (all in the head or neck).  None of them took a step.  Every one collapsed in a heap.  I haven’t had that kind of luck with a 12 gauge slug.

The famed Bill Jordan also opined that the .22 magnum would make an ideal hideout handgun.  He pressured Smith and Wesson to make a J-frame snub in that caliber, stating that he would prefer the performance of the .22 magnum over the .38 spl out of a snubnose revolver.  Unfortunately the 351 wasn’t developed until after Jordan’s death.

If you want more quantifiable information on the cartridge, BBTI published a chart of the velocities of the various .22 Magnum rounds when fired through different barrel lengths.  Richard Mann did some ballistic gelatin testing for American Rifleman Magazine and reported some good findings as well.  In his tests, the 45 grain Hornady Critical Defense round expanded to .36 caliber and penetrated 15″ of gelatin.  That’s as good or better than most .38 spl defensive loads out of the snub revolver.

In a more recent article, Richard did some additional testing with mini revolvers having a one inch barrel.  Penetration was decent but expansion was not as good out of the really short barrels.

The .22 mag has essentially no recoil, but has similar performance as compared to its .38 cousin.  It does, however, hold two more rounds.  I can see why Bill Jordan  liked the idea and called it a “wicked little cartridge.”

If you are going to carry the .22 magnum, I would stay away from the KelTec semi auto PM-30.  It’s a really neat idea, but I haven’t found one that will work reliably for defensive use.

Stick to the Smith and Wesson revolvers or the Ruger LCR.  The LCR is the cheaper option and actually has a better trigger.  In my experience the S&W triggers are horrible in this caliber.  I’ve tried to replace the mainspring and the rebound spring with lighter aftermarket versions.  They greatly improved the trigger pull, but negatively affected reliability.  It seems that you can’t really monkey with factory specs in the S&W .22 magnum revolver and still have a reliable gun.  I’ve tried every combination of spring weights possible and none of the combinations worked well enough for defensive carry.  I’m back to the factory springs for carry purposes.

The NAA mini revolvers are another option.  They are tiny and very handy to carry, but most people don’t shoot them well.  The shorter barrel also negatively affects bullet performance.  If you can shoot the gun fast and accurately, I wouldn’t discourage you from carrying it, but I don’t know many people who can honestly do that.  I have one at the PD, and after a few trials,  I determined that I would rather carry a knife than the mini-revolver.  Buyer beware with those little things.

If you have a reliable gun and load it with either the Speer Gold Dot or Hornady Critical Defense rounds, you will have a lightweight, limited recoiling gun that offers low end .38 spl. performance while providing a couple extra rounds in the cylinder.  That’s a tough combination to beat.