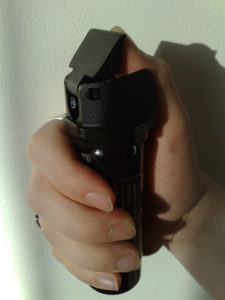 It finally happened.  After nearly 21 years of police work, a couple weeks ago I was threatened by a person wielding pepper spray.  I’ve sprayed lots of criminals over the years and been sprayed by some errant shots from other cops on the street, but that was the first time I had ever been confronted by a suspect threatening to use pepper spray against me.

We had been dispatched to a suicide attempt call.  The caller said that her 30-year old daughter had a knife, was trying to kill herself, and had already cut herself seriously on her leg.  Another officer and I arrived simultaneously at the house and began walking up the driveway.  As we approached the house, a woman matching the description of the suicidal person walked out of the garage.

She replied “No!  That’s not me!” and ran back into the house.

As soon as we got in the house, the woman picked up a can of Fox Labs pepper spray and pointed it at me.

I remember thinking “Oh shit.  This is going to hurt.” as I got some distance from the suicidal suspect and drew my Taser. 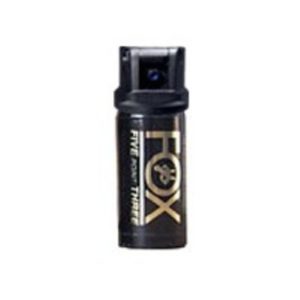 The nasty Fox Labs pepper spray the suicidal woman threatened me with.

The story ended somewhat anticlimactically.  After about a 10 second “Mexican standoff” between pepper spray and Taser, the suicidal woman obeyed our commands to drop the spray.  We moved in and handcuffed her.  Further investigation and an evaluation from paramedics showed that she was mentally ill and was off her meds, but she was not suicidal at that moment.  She did not have a knife and had not cut herself.  As commonly happens, the person who called 911 exaggerated the events taking place to get a faster police response.

As I told the story to several people in the days that followed, the most common response I got was “I would have shot her.”

I obviously didn’t shoot.  Neither my partner nor I even drew our handguns.  When I asked my friends why they would have shot, they universally stated: “If she pepper sprayed you, you could have been incapacitated.  If you are incapacitated, you might not be able to defend yourself against a gun grab attempt.  While you are fighting the effects of the spray, she could take your gun and kill you with it.”

While that is certainly a POSSIBLE outcome in the encounter, it is not a LIKELY outcome.  There is a difference.  While it’s POSSIBLE that 20 ninjas could rappel down from my ceiling and kill me with a barrage of throwing stars, it isn’t LIKELY.  Self defense claims require a REASONABLE expectation of suffering serious injury or death, not a POSSIBILITY of that happening.

In my opinion, if a criminal was using pepper spray and attempting to disarm his victim, it likely WOULD justify a lethal response.  The problem is that the criminal actually has to be trying to take the gun for the victim to reasonably fear for his life.  We need reasonable, articulable facts that would lead a person in a similar situation to believe that a disarming attempt was immanent.  Mere possibility of an event happening isn’t enough evidence to keep us out of jail.

Furthermore, it’s going to be tough to show that pepper spray is a lethal weapon when almost every police department in the country places the use of pepper spray at one of the LOWEST levels on the use of force continuum.  In most police agencies, you are required to pepper spray a resisting subject (if feasible) before you even consider using empty handed strikes against him.  Pepper spray sucks, I know.  I’ve been exposed to it more than 50 times in training and on the street.  It causes a lot of pain and some temporary blindness, but it doesn’t cause serious injury.  If it doesn’t cause serious injury or death, you aren’t justified in using lethal force to defend against it.

In summary, the use of pepper spray against you by a criminal suspect generally IS NOT a justification to use lethal force.

So many people misunderstood this fact when I explained my situation last week, that I felt I had to write another article just to set the record straight.  Take a look at the additional articles linked below.  Some of them provide some viable options for dealing with pepper spray that don’t involve using your firearm.  Study those tactics and comitt them to memory.  If you shoot someone who is only armed with pepper spray, things aren’t going to turn out well for you.