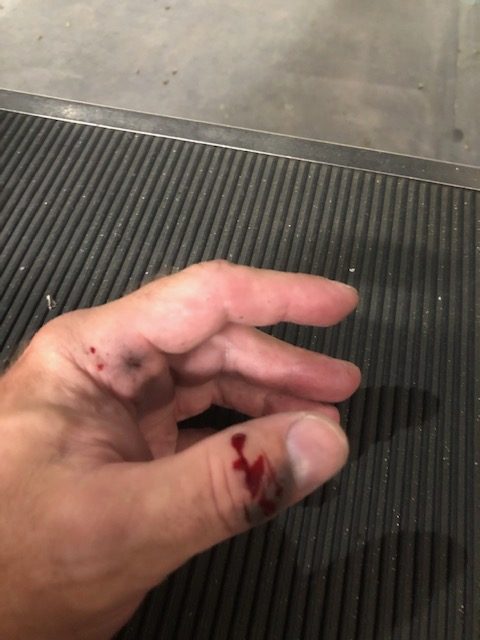 I had an unusual experience at the range today.  The gun I was shooting blew up in my hand.  In a 20+ year career as a full time firearms instructor, I’ve seen a few guns blow up.  I blew up a Kahr PM-9 once (stupidly) shooting reloads from an unknown source.  I’ve seen a couple more guns blown up in my training classes when squibs got stuck in the barrel.  Although it’s still a mystery why my gun blew up, I am certain it’s neither due to a squib nor a bad reload.

I was shooting when I heard an extra loud report, saw a bright flash, and felt a searing pain in my left hand.

I looked down and this is what I saw.   The gun was locked up tight.  I could not open the cylinder.

Note powder burns and shrapnel injuries on my left hand.

I slapped a bandaid on the shrapnel wound, packed up the gun and went home.  I cleaned up my injuries and then went to work to figure out what had happened to my little Smith .22.

It will not be an easy post-mortem.  There are a lot of weird coincidences that happened with this incident.

According to my records, I hadn’t shot the gun since June of 2015.  It was once my “yardwork” pocket pistol and dog walking gun.  I replaced it with a 351C in .22 magnum (that shot closer to point of aim) and stuck the 317 in the safe.

I kept it loaded with CCI Velocitors just in case the 351C had problems.  It didn’t.  The 317 sat loaded in the safe for more than five years without being fired.

Knowing the Velocitors had been loaded in the gun for a long while, I first attempted to shoot them.  Four of the eight rounds did not detonate on first strike.  Three of those four fired on the second strike.  That was exceedingly rare for this pistol.  I had worked hard to get the right spring combination for 100% reliability.

Strange.  I assumed that some oil had worked its way into the priming compound of the old ammo and deactivated it.

I reloaded the gun with a box of .22 from my “random .22 stash.”  When I was the training officer for the department, I often got old ammo turned in from our residents.  Twenty-two ammo was the most common donation.  I have ammo cans full of mixed boxed .22 ammo with vintages throughout the last 70 years.

This is what I loaded into the gun.  It was the only box of this brand that I had.  It looked to be from the 1960s or so, but all the ammo was shiny and had no corrosion.  I don’t remember ever shooting this brand of .22 ammo, but I’ve fired thousands of rounds just like it over the years with no problems.  I thought I might get a dud or two, but that would be the most serious issue I would experience. 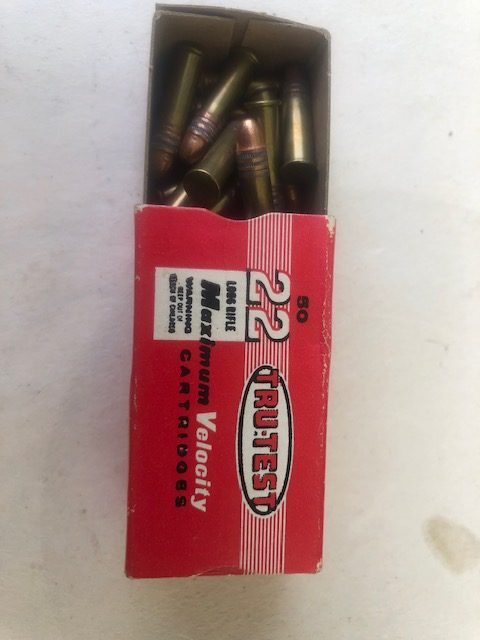 I filled the cylinder up with this junk and started cranking off some rounds.  The first two fired the same as any other .22 round.  They had less blast and recoil than the Velocitors I had just shot.  On the third shot, the gun blew up.

I got the gun home and assumed that a squib had become lodged in the barrel and when I fired the following round, the obstructed barrel forced the blast back into my hand.

Nope.  I started by inserting a cleaning rob down the barrel.  It dropped freely all the way into the cylinder.  There was no obstruction.  I also didn’t experience the telltale diminished sound of a squib load or being showered with the  gunpowder that most squibs deposit into the gun’s action.

If there was no obstruction, why wouldn’t the cylinder spin or open?

I pushed the cylinder release forward and rapped the cylinder a couple time with a rubber mallet.  It popped right open on the third strike.  This is what I saw. 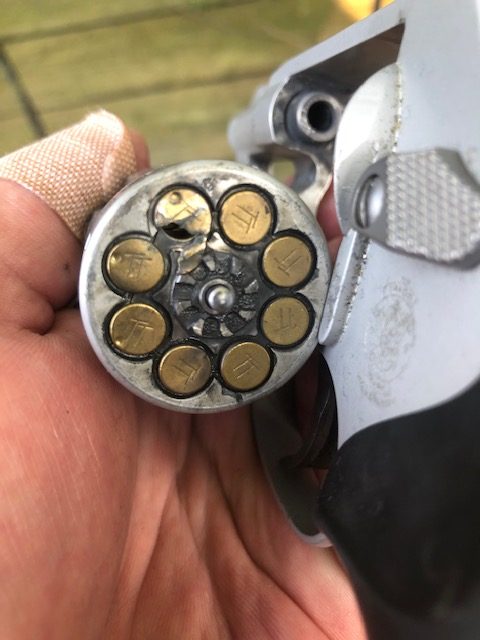 The brass case had separated and physically blocked the lugs on the extractor star.  That’s why the cylinder locked up.

I dumped out the live rounds.  The empties would not eject. 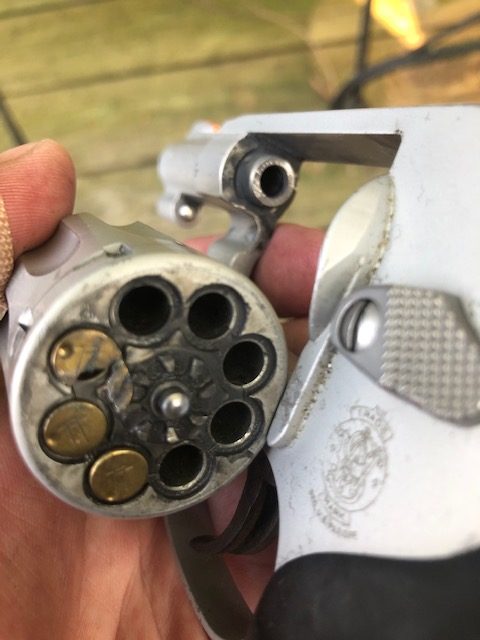 Yes I know the gun is dirty. A lot of that was powder residue from the shot that blew up.

I smacked the ejector rod with a mallet.  The damaged shell casing split up and fell down underneath my back deck.  I never recovered it.  The two rounds adjacent to the blown up round were rather unique looking.

This was the empty in the chamber right next to the blown up case. 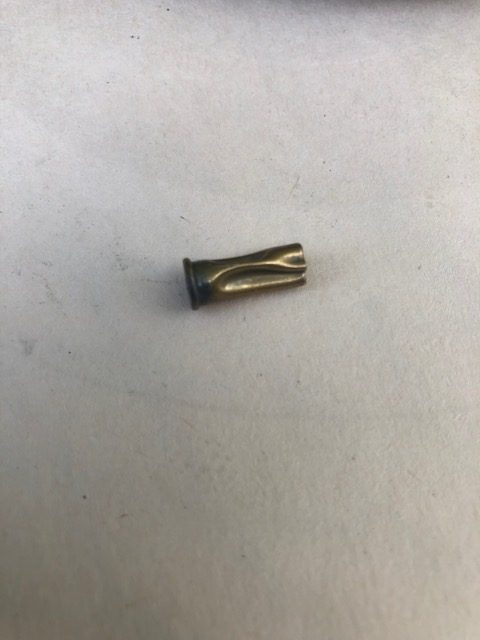 Here is the loaded round recovered from the other adjacent chamber. 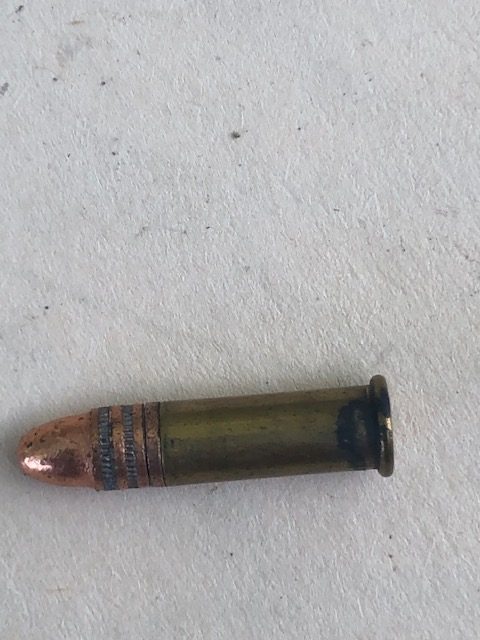 Note the powder burns near the case head.

I wiped away the soot and ran a bore snake through the barrel and all of the cylinders.

On fiurther inspection, I noticed a deficit on the face of the cylinder.  You can see it in the photo below. 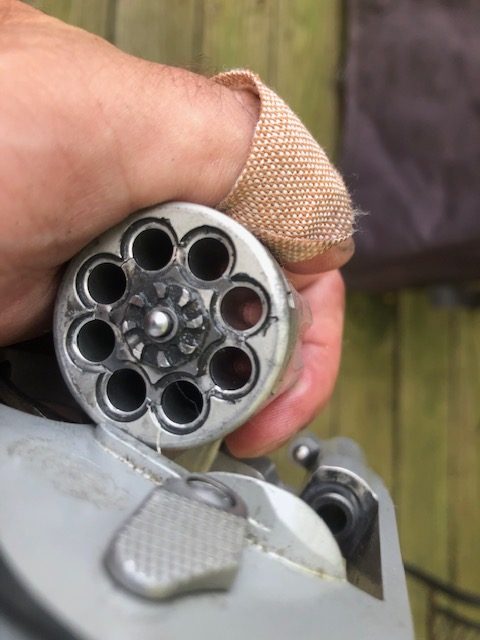 See the gouge on the cylinder face at about 3pm?

That gouge looked new.  Looking back, you can see it in the first picture I posted of the cylinder.  The gouge is amost opposite the damaged cartridge.

There were also a couple of gouges or chunks taken out of the breech face. 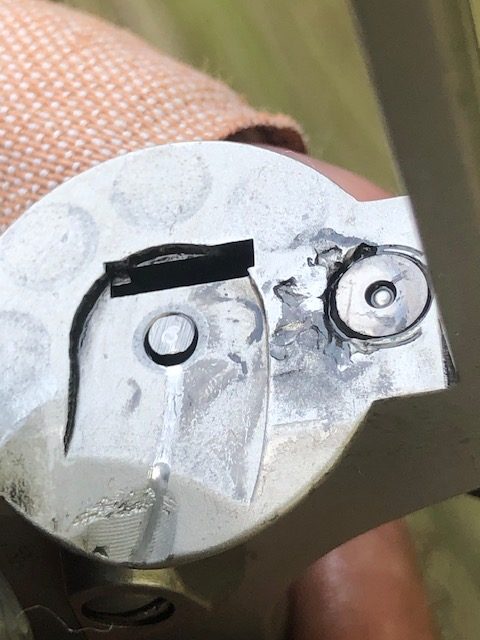 Check out the chunks missing near the firing pin and the deep scratching at 6pm in the photo.

I bought the gun used.  I’ve probably put 2000 rounds through it in the last 20 years.  It’s entirely possible that I didn’t notice the damage to the cylinder or the breech face, but it isn’t likely.  I think I’d notice that whenever I cleaned the gun.

So the mystery remains.

What blew up my gun?

It seems to me to be an overcharged .22 round.

I’ve never seen that happen in a .22 long rifle before.

Here are a few of my questions for my knowledgeable readers:

1) Have you ever seen a .22 case blow up like this?  Could it be too much powder from the factory or weakened brass from a 60 year old cartridge?

3) What about the four duds in the Velocitors that I fired before these loads?  Coincidence or not?

4) After cleaning the gun up, it appears to function fine.  Would the damage to the breech face make you hesitant to fire it again?

5) What caused the crazy deformation in the empty case adjacent to the blown up round?

6) What’s your best guess as to the cause?  Just to be clear, I’m not blaming either Smith and Wesson or the cartridge manufacturer.  I’m not looking to get paid or even to have my gun replaced.  It’s just weird and I want to figure out how it happened.

I’d appreciate any insight you would like to share.  I am going to try to enable comments directly on this post.  Please don’t make me regret that.

And if you are curious, I picked two tiny pieces of brass out of my hand and scrubbed everything clean. The photo below is what it looks like now. The gunpowder is tattooed under the skin of my thumb and index finger and doesn’t come off, even with a scrub brush. I’ve seen powder tattooing on bodies at work, but I’ve never actually experienced it myself. It’s pretty cool. 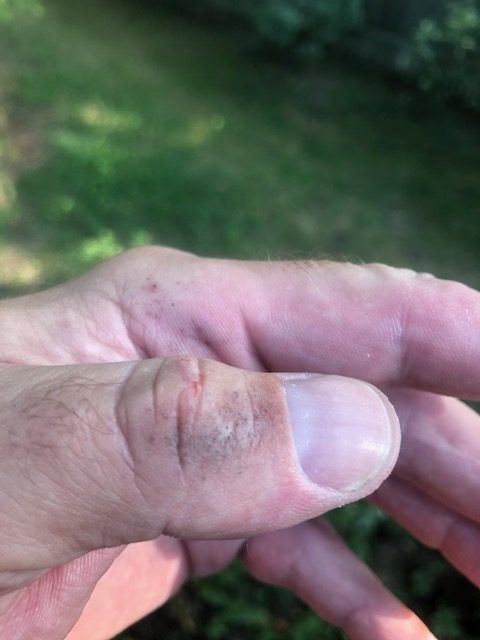