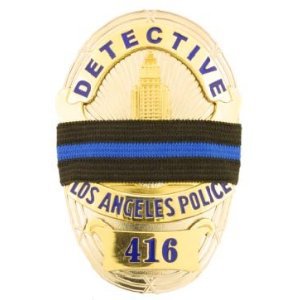 Today is Memorial Day in the United States.  It is a holiday for memorializing the members of are armed services who have died in battle.  I wish to start out this article by honoring the fallen and remembering the families they have left grieving.

In the police world, other than the police memorial week, we don’t have any celebrated holidays honoring officers who have been killed.  Officers often have their own customs to honor the dead.  One of those customs is wearing a black sash across the uniform badge.  The black sash is called a “mourning band.”  It is designed to honor an officer who has been killed in the line of duty.  Official mourning band protocol indicates that the bands should be worn while attending police funerals, when an officer in your own agency dies, or an officer from a neighboring jurisdiction dies.  Officers regularly wear the bands whenever an officer in their particular state dies as well.

I had occasion to wear a mourning band last week when an officer from a neighboring department died in a tragic on-duty motorcycle crash.  I was not good friends with the officer, but had met him on several occasions and even had him as a student in a few classes I taught for his department.  He seemed to be a good man and his death was a tragedy.

Despite the fact that his death met the criteria for wearing a mourning band, I did not add a band to my badge last week.  I don’t intend my actions to convey any disrespect.  I don’t EVER wear mourning bands.  My decision and explanation may draw some ire from my fellow officers, but I hope they will read the reasons for my decision and understand why I choose not to memorialize the dead with a black band placed across my badge.

The first reason I don’t wear a mourning band is that I think it creates further separation between police officers and the citizens they serve.  If all lives are important, why aren’t we honoring the homicide victims in our cities?  Why aren’t we wearing mourning bands when a member of any other profession dies at work?  Wearing the band shows that we value “our own” more than the members of the communities we serve.  That’s a big issue for me.  We shouldn’t have a special class of government employees that receive special treatment from other government employees and the citizens we protect.

Besides creating a culture of separation between cops and the citizens in our communities, the protocol has always seemed illogical to me.  Why do we only mourn officers of our own and neighboring jurisdictions?  Aren’t all officers’ lives important?  If we think so, we should be wearing the mourning band whenever an officer anywhere in the country is killed.  But we don’t do that.  Only officers nearby are deemed “special” enough to merit a mourning band.  It’s another example of unequal treatment being shown to certain groups of people and not others.  I don’t think it makes for good policy to show how much we care about some officers’ deaths, while at the same time ignoring the deaths of other officers because they live in a different part of the country.

Even more important than the issues of creating separation between cops and citizens (as well as between cops and other cops), I think the idea of honoring the sacrifice made by a fallen police officer by placing a piece of nylon over the badge is a ridiculous token gesture at best.

If we really wanted to honor the dead, police departments would be working hard to increase the quality of officers hired, train them better, give them better equipment, and hold their leaders accountable.  That doesn’t happen because it’s difficult and expensive.  It’s much easier to just place a mourning band on a badge than it is to properly train, equip, and lead an officer in a manner that his death might be prevented.

Police agencies don’t actually care about their officers.  If they did, the agencies would invest heavily in their employees to prevent every possible line of duty death.  That isn’t happening.  Yet everyone wears a black band to pretend they actually care when someone dies, even if that death could have been prevented through better training and equipment.  I stopped playing pretend games when I got out of elementary school.

I honor our fallen officers by ensuring that fewer of them die in confrontations with criminals.  Actions like that are truly meaningful.  Wearing a black piece of nylon is not.  You all keep pretending that you care about our dead brothers and sisters by wearing a silly black band.  I’ll keep providing them with the best training I can possibly deliver.

I think the best way to honor our fallen officers is to ensure that their co-workers stay alive.  I’d rather focus my efforts on doing that instead of wearing a black band on my badge to “honor” the dead.  Token gestures are meaningless.  If you are a cop who hasn’t done the work to ensure that you can save your co-workers’ lives in an emergency, I hope you find solace in that black band when the next cop dies.