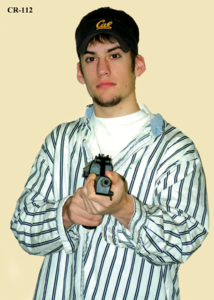 Lots of my readers prepare for a situation where they might be attacked.  Many practice shooting their firearms, a lot practice some type of martial arts or combatives, even more mentally plan what they may do in the event that they are victimized by a criminal.

This is important work.  If your brain can’t conceive of an event happening, you can’t logically determine a countering action.  As my friend William Aprill says: “You have to have a parking space in your brain” to consider that a potential attack can take many forms.

A genuine weakness in many of my readers’ preparedness is a failure to consider that they may be attacked by a juvenile.  And I’m not talking about a 17-year old gang member.  I’m talking about a LITTLE KID.

Take a look at this incident:

Would you ever imagine that a seven year old boy would use a loaded gun to car jack a woman in a church parking lot?

While exceedingly rare, incidents like this happen.  In my experience, many people (especially mothers), are unprepared to use the required amount of violence to solve the problem if the target of such violence is a child.

Are you prepared to protect yourself from a child predator?  Here are some questions to ask yourself:

– Would you be more likely to attempt a close range gun disarm against a pre-teen or an adult?  If yes, have you ever practiced taking a gun away from a resisting attacker?

– Do you believe a juvenile criminal with a gun is less likely to hurt you than an adult with a gun?  Is there any legitimate evidence to support your belief?

– What if you were confronted by a pre-teen armed with a knife?  Would you shoot the kid?  Why or why not?

– Most students of self defense understand the concept of “disparity of force”.  That’s the idea that a larger number of attackers presents a greater danger than a single attacker and generally justifies a more violent response.  What would you do if you were confronted by a gang of several 12-13 year old boys who physically attacked you?  Would you be able to handle the situation physically or would you have to use a weapon?

– Are you mentally prepared to kill a pre-teen criminal who is presenting a deadly force threat?  Not everyone is.  If you are not, what are your alternative plans?

Don’t just skim over these questions.  Your tactical homework this week is to take several minutes to actually come up with thoughtful answers to each of these questions.  Doing so may save your life if you are ever looking down the barrel of a gun being held by a 10 year old.