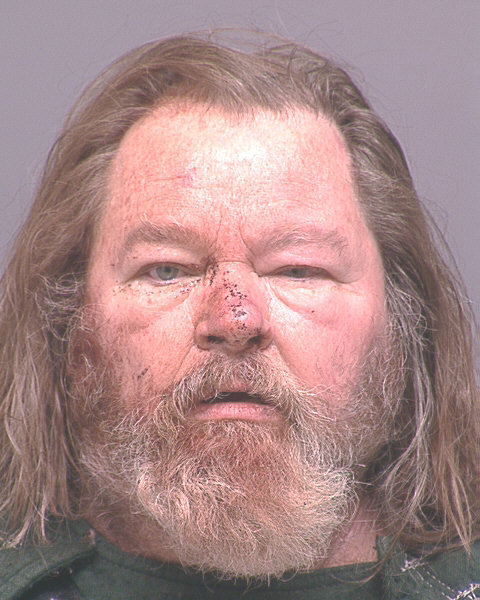 Imagine standing in line at the grocery store waiting as your spouse pays for your purchases.  As your spouse keys in the pin number for the debit card, a man behind you in line (pictured above) pushes past you and begins trying to see the numbers your spouse is inputting on the keypad.  You tell the man to step back.  He ignores you and continues to try to get a closer look at your spouse’s pin number.  What do you do?

A 59 year-old man in Oregon recently faced this situation.  After the second verbal warning instructing the man to step back, the man attacked.  The physical confrontation in the register aisle quickly turned even more dangerous as the nosy shopper drew a semi-automatic pistol and tried to shoot the man who was protecting his wife’s pin number.  Read more about the story here:

Who could imagine that such an incident could lead to gunfire?  It certainly isn’t the normal scenario armed citizens train for.  Have you figured out what you would have done?  Here are some things to think about…

1) Not all gunfights start out with guns drawn.  When the average gun owner imagines a typical gunfight, he thinks about having some separation between himself and the bad guy.  He thinks that both he and the criminal will be armed with similar weapons.  That isn’t the norm.  In real life there is often an unequal distribution of both weaponry and initiative.  The bad guy doesn’t want to attack someone who can beat him.  He’ll pick a moment when you are likely unarmed and start the attack with an ambush or sucker punch to further gain initiative.

Many gunfights start out as physical fights before the guns are drawn.  Can you draw your weapon while your hands are covering your head from a maniac’s punches?  Can you stop the criminal’s drawstroke?  Your ability to “just step back and draw” like your CCW instructor advised may not be possible if your attacker is physically controlling the fight.  You need some more options.

2) When starting at a disadvantage (like this victim) it is often better to stop the criminal’s draw or control the criminal’s gun arm rather than trying to draw your own weapon.  Drawing against a drawn weapon is a recipe for taking a gunshot wound.  It’s just too slow.  You should be practicing some physical skills as well as your shooting.

3) Did you consider the environment?  When fighting in a crowded register aisle in a grocery store, movement will be limited.  You likely won’t be able to move laterally or escape.  Have you ever practiced your fighting skills (gun or otherwise) in such close quarters?  How would you use the environment to your advantage?

4) You likely have a panicked cashier, dozens of innocent shoppers, as well as your spouse in very close proximity.  How do these people factor into your fighting plan?  How can you get a non-combatant family member to safety in a scenario like this?  If your spouse carries a weapon, have you ever practiced working together in close quarters to solve a problem like this?  How do you work to ensure that no innocent people get shot?

5) How many of you leave the gun at home because “I’m just going to the grocery store”?  How many of you think “I don’t need my gun.  If someone wants my wallet, I’ll just give it to him.”  Violence can happen anywhere and some criminals want more than money.  No amount of money would have stopped this attack and shooting.  You have a crazy man who went on the warpath.  Most of you will need a gun to solve this problem.  Make sure you carry it.

6) The victim here was smart enough to remove the magazine from the attacker’s gun during the fight.  That limited the attacker’s ability to fire additional shots.  Can you do that with any guns you are likely to face?  You may have to.  You should know how to remove the magazine for all common semi-automatic pistols.  You should also know how to jam an autopistol by taking its slide out of battery.  Finally you should know how to stop both a cocked and uncocked revolver from firing?  Do you know how to do all that?  I can’t tell you how many accounts I’ve read where these actions have saved someone’s life.

One additional tip I can give you…

Use your shopping cart to your advantage.  Pull it BEHIND you while unloading groceries onto the register belt.  Keep the front of the cart in contact with your leg and between you and the person behind you as you unload your groceries.  It will be very difficult for an attacker to get through or around the cart to either rob you or steal the pin number on your card.  Grocery carts can also be used as barriers while you are loading your kids or your groceries into the car.  Place the cart between you and the source of danger.

Your homework assignment this week is to use your grocery cart tactically.  Try to figure out all the way you can use the cart to protect yourself or your kids.  Comment here if you have a good idea.

I don’t want any of my readers to end up with a hole in their leg like the victim pictured below.  Figure out the answers to the questions I posed above and you will be much more likely to avoid that gunshot wound 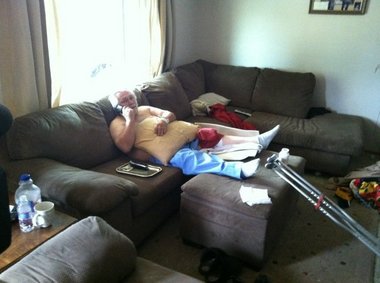 If you have never been trained about how to do the things I described above, consider taking a class!  Check out our Upcoming Classes.  Active Response Training can also come to your location.  Contact us to talk about hosting a class!