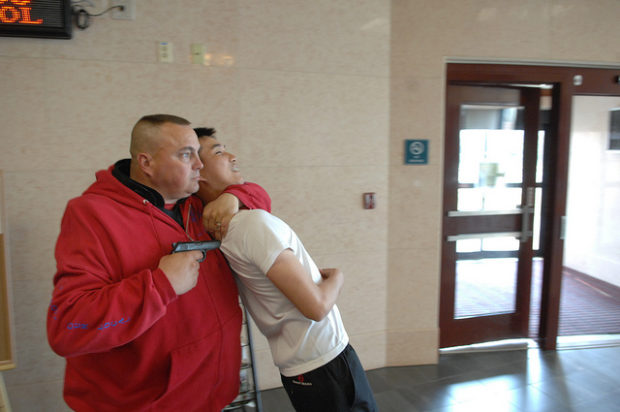 You and a co-worker are working late into the night. As you open the door to leave, a man bursts in and holds a gun to your head. He marches you and  the co-worker to a different part of the building where the safe is located.

The attacker thinks that another worker will be coming to deposit money into the safe, so he holds you there at gunpoint. After 20 minutes, the other worker hasn’t arrived and you think the attacker is about to kill you. What do you do?

This is the scenario that a couple of bar workers found themselves in.  Read all about it in the story HERE.

There are a couple of interesting aspects to this scenario….

The first is that the victims waited for a good opportunity to act. Fighting a person when they have a gun to your head is a very risky move. These employees attempted to apply some deception and make their escape. It didn’t work and the robber shot one of them, but it was a good attempt.

The second point is that the one victim instantly attacked once his friend was shot.  He wasn’t in denial. He knew that he would be shot next and that escape wasn’t an option. So he attacked. Even unarmed and against the odds he did what he had to do and ultimately prevailed

Third point…the fight over the gun lasted EIGHT MINUTES! How many of you are in good enough shape to go all out for eight minutes to save your life? I’d bet most people aren’t. You can’t fake fitness. I have lots of friends who love to train and to shoot, but they don’t work out.  Sometimes the fight for your life might not be the gunfight you imagine it to be.  Sometimes it might be an all out physical gut check.  You have to be prepared for both.

Most people don’t want to acknowledge the reality of the situation, but the single most beneficial thing you can do to increase your ability to win a hand-to-hand fight is to increase your strength and endurance. Learning shooting skills and martial arts is good, but if you have a heart attack before you draw your gun, you still lose the fight!  I had a student who died of a heart attack during a robbery attempt.  He died before he could even clear leather.  The robber took his gun and wallet right off his dead body.  I’d rather not have another student die in that fashion.  Most people’s money would be better spent on a gym membership than on additional guns and ammo.

The victim’s knowledge of his attacker’s gun saved his life. He was able to overpower his attacker and take the gun. Once he had it, he knew how to fire it effectively when the robber attacked him again.

Furthermore, the victim was knowledgeable and calm enough to know how to block the gun’s trigger in the fight. That action also saved him. Learn how to disable guns (hold cylinders, take slides out of battery, drop magazines, block hammers, etc.) in addition to knowing how to shoot them.

Sometimes it’s the skills we forget to practice that ultimately are the ones that save our lives.