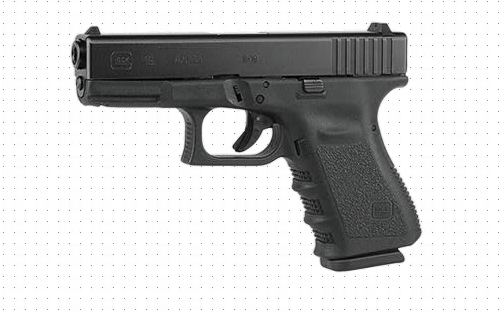 I recently read the article linked below.  It discusses what the average person should be carrying on his person in order to be properly prepared for a criminal attack.

Concealed Carry: How Much Gun And Gear Do You Need?

The article makes the point that statistically, you will never need your gun.  We carry our guns for the statistical anomaly.  Therefore we should go “all in” and be prepared for the worst possible case scenario at all times.  The author suggests carrying a full sized gun, two spare magazines, a backup gun, one or two knives, and medical gear every time you leave the house.

The author also talks about a friend who:

“…never leaves the house without his minimum load out: two full-sized 1911s in .45 ACP. Plus two spare magazines for those pistols. And two J-frame revolvers, with a reload. And two locking tactical folders. Plus two flashlights.”

While the author isn’t wrong, where does it end?  Why do we stop with four pistols and two knives?  What if I get attacked by a guy with a rifle from 300 meters?  That’s possible, right?  Why don’t I “go all in” and carry my .308 sniper rifle around with me every day to deal with that potentiality?  We can eventually war-game this scenario to the point of being ridiculous.

I don’t think we should get all wrapped up in the issue of the “right” amount of gun and ammunition to carry. There is no “right.” What you carry depends on four factors: your abilities, your goals, how hidden your gun must be, and an honest risk assessment.

Skills- Look at your abilities first. I can make 100 yard hits with a .38 snub. I can shoot a .38 snub better than most CCW licensees can shoot a full sized pistol. I can shoot a compact Glock better than many cops on my department can shoot a carbine. That isn’t bragging. I’m middle of the pack in shooting abilities among my instructor friends. I know lots of people who can shoot way better than I can. The point I want to make is what I carry doesn’t have to be the same thing that you carry because we have different skill sets.

With that said, the lesser skilled among us need bigger guns and more ammo. The larger gun will enable more accurate and controllable fire. More ammo will allow them to stay in the fight longer if they miss more shots. The problem is the Dunning-Kruger effect… the lesser skilled folks don’t recognize their lack of skill and carry guns they don’t shoot well and often go without a reload.  Take time to honestly evaluate your skills and abilities. If you shoot once a year, you’re probably not going to stop multiple ISIS terrorists with your KelTec .32.

Karl Rehn took students of varying skill levels and had them shoot the same test with a full sized pistol and then with a pocket pistol.  I’ll let you read his conclusions.

He found that while all students performed worse with the pocket gun, there was less performance degradation between the two guns in the hands of a highly skilled shooter.  He estimates that for a shooter without any additional training beyond a CCW class, a pocket gun will only solve about 40% of the problems that person may face. 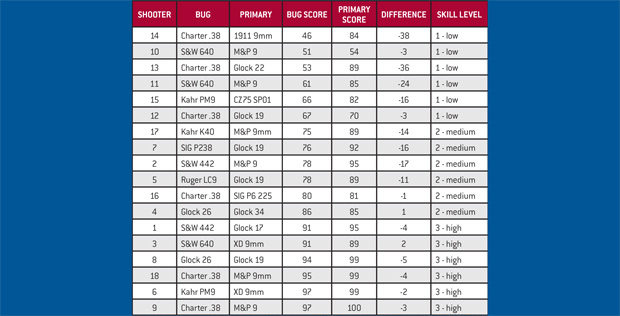 Goals- Is my goal to seek out and destroy terrorists as part of my job? If so, I’m going to kit up with rifle plates, a carbine, eight spare rifle magazines, and a full sized pistol. If my goal isn’t to seek and destroy, but only to get myself and family to safety during an unexpected ISIS attack on the shopping mall, a Glock 43 might be just enough gun to provide some cover fire in order to get away.

If my goal is to escape and maybe take a few terrorists out if given the opportunity (a goal which I suspect most readers would likely resonate with), I might want a gun with a longer sight radius than a baby Glock and some extra ammo.

Let’s use a terrorist attack or a multiple suspect active killer event in a public location as a worst case scenario.  Your mission drives the gear train.  Are you planning on actively hunting down and engaging multiple criminals or terrorists?   Is your plan to barricade yourself and your family and wait for police assistance?  Or do you plan to make an escape and only engage the criminals/terrorists who stand in your way?  Each of these objectives could be adequately handled with a different type of gear.

What is your mission? Does your gear support it?

Concealment Needs- The standard advice is to “dress around the gun.”  Sometimes that is possible.  Sometimes it is not.  Women’s fashion choices make it difficult to regularly carry a full size gun in all outfits.  If there are serious consequences (like getting fired or arrested) if your concealed gun is noticed, you might want to make an extra effort to ensure that your guns stays concealed.  That might mean carrying a gun smaller than what may be ideal.

When I’m out and about, I most often carry a Glock 19 with a spare magazine.  When I’m operating in a “non-permissive environment,” I have to carry something smaller and more discreet. 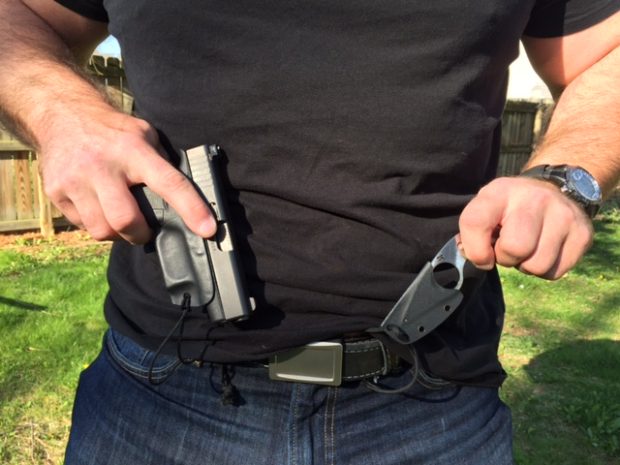 Risk assessment- Finally we have to look at risk profiles. When I’m out mowing my grass in my nice suburban neighborhood, I’m not likely to come under fire from ISIS. The most likely scenario is that I may have to deal with a single burglar who thinks my house would be a good target because I am distracted doing yard work. Would my eight- shot .22 airlite snub be enough to handle that problem? For me, it likely would. But that doesn’t mean I carry a .22 snub in my cop job. The risks are very different.

When I go to the gym, I am more likely to be attacked than when I’m mowing my grass, but being attacked is still an exceptionally low probability. I think most likely a Glock 26 in a fanny pack with a spare mag will be enough to win that fight, so that’s what I carry.

If I’m shopping at Wal-Mart or in a shopping mall, I recognize my risk is higher than it might be when I’m in my car driving the two miles to my gym. There’s a better chance of encountering a terrorist attack or a long- range active killer. In that scenario, I don’t feel as comfortable with my Glock 26. I’ll probably be carrying a Glock 19 with a spare mag.  If the area I’m visiting is exceptionally dangerous, I  may even carry a backup gun.

When going out to work in a patrol car, there is an even greater chance of encountering violence. I wear body armor, carry a Glock 17 with spare mags, a backup pistol, a Benelli 12 gauge, and an AR-15 with 10 extra magazines. That seems like a good choice to me for the work I do…but I don’t run around wearing all that stuff while mowing the grass.

I carry different weapons to protect myself from different threats. What I carry may not be appropriate or necessary for you. Evaluate your own skill levels, goals, and risks and choose your weapon based on your individual needs.

One gun for everything?- As you might have figured out, I like guns. I make a good living and can afford to buy a few extras. I carry different guns for different jobs because I can. I’m not saying that you need a different gun for every activity you pursue.

You can do everything with one handgun. Choosing a single handgun that is suitable for any possible mission should depend primarily on the shooter’s skill level and concealment needs. For most shooters, a mid-sized 9mm will be the best choice.

I like Glocks, but an M&P, XD, H&K, or Sig will probably fit the bill. I like Jeff Gonzales’ advice that your primary handgun should carry at least 10 rounds and that you should carry at least one reload. Certainly some can get by with less and some need far more, but most shooters will be best served if they follow Jeff’s advice. If I could only carry a single gun for defensive purposes, it would be a Glock 19. I love my M&P Shield and my .38 snubs, but if things go bad, I have to admit that I shoot my G19 better than I shoot those other guns.

Be honest with yourself. What’s the most concealable gun that you shoot well with?  That should be your baseline CCW piece.

My friend Tim Chandler with Justified Defensive Concepts (take a class from him) has some excellent summary advice on the issue.  From his comments on Facebook:

“The subject of how much gun to carry often comes up and it often gets silly, in my opinion. It is silly because of the bell curve.

I know a number of people who will, on occasion, pack a relatively small weapon like a Glock 42 or a snub-nosed revolver and do so with no trepidation. On one side of the curve are people with no training, little skill, and they do not make a practice of daily carry or any of the other things that go with it.

On the other end of that curve are people with significant training, experience and capability.

The fact that a T-Rex uses a piece of equipment after making a conscious decision based on the circumstances and an assessment of the threat level does not mean that equipment choice is optimal for every other person in every other situation…but that’s how it often gets labeled. “X carries a snubby!”

On some occasions, yes. They do. But X can also make a 50 yard head shot on demand with that snubby. And X has spent decades learning hand-to-hand and knife skills that give them at least two dozen different ways to kill a dude at any given moment. And X has sufficient situational awareness skills to see a problem coming and avoid it, or sufficient verbal flexibility and command presence to make most bad situations stop being bad with just a few words. And they carry themselves in a way that makes most criminal actors decide to not even bother in the first place.

The T-Rex isn’t relying on the snubby they are packing to save their ass. T-Rex *is* the danger.

Their mojo ain’t in the gun they’re carrying. When examining the question of whether *you* should carry the same go ahead and insert a big asterisk that says “YOUR RESULTS MAY VARY”

I could not have said it any better.  There is no single gun that is “enough” for every skill level or threat situation.  I urge you to thoroughly evaluate the factors I wrote about above and make a carry decision based on your true skill levels, mission parameters, and concealment needs.  That pocket gun may be “enough.”  It may not be.  That’s a decision only you can make.