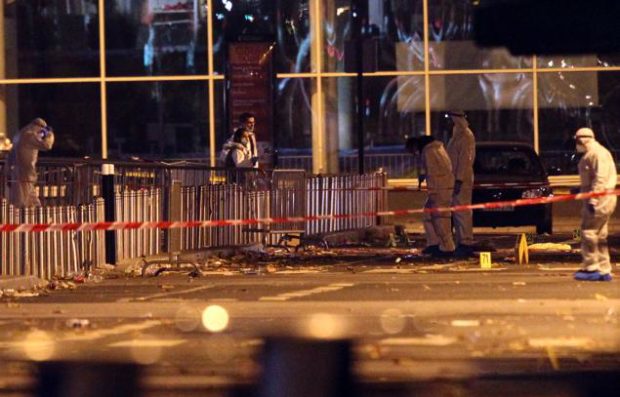 This is a guest article from retired Police Chief Jeff Chudwin. Jeff sent an initial draft of this information out to an email police firearms instructor list and I contacted him to ask permission to reprint it. He graciously agreed and re-wrote his draft, proving even more information for you.

If you are unfamiliar with Chief Chudwin, he’s the 2009 Law Officer Trainer of the Year and retired as Chief of Police from a Midwestern city.  Jeff is a well known police trainer and has been educating both officers and the members of the public in areas of safety and security for more than 30 years.

I’ve taken numerous classes from Jeff over the years at various police training conferences. He is an extremely knowledgeable and dedicated trainer. I thank him for the use of his article.

French officials report that the explosives used in the Paris attacks were TATP.

Those in EOD who deal with these matters explain that TRIACETONE TRIPEROXIDE (TATP) is a witches’ brew that is produced in a makeshift lab.

“TATP has been used in bomb and suicide attacks and in improvised explosive devices, including in Israel and the London bombings on 7 July 2005, in which four suicide bombers killed 52 people and injured more than 700.  It was also used in the November 2015 Paris attacks. Due to its high susceptibility to accidental detonation by shock, friction, or sparks, acetone peroxide has earned the nickname “Mother of Satan“. Several methods can be used for trace analysis of TATP,[18]including gas chromatography/mass spectrometry (GC/MS) and high performance liquid chromatography/mass spectrometry (HPLC/MS)”

There are several explosives in common use in the Middle East. C-4 (a type of plastic explosive) is one of the more potent, but also the rarest because it is the most difficult to obtain. In Israel and the Palestinian territories, increased crackdowns by the Palestinian Authority led to the arrest of most skilled explosive makers and made smuggling more difficult, leading to less common use of trinitrotoluene (TNT). Its replacement has been the much less stable and more dangerous, but easy to make, acetone peroxide (TATP), known as Mother of Satan for its instability. This shift led to many casualties among explosive makers as well as nearby civilians, as the clandestine laboratories that produce explosive belts are often located in residential areas, and it is not uncommon to find dozens or even hundreds of kilograms of TATP in a single location during a raid. In some constructions, TATP is used only for the initiator, and the explosive itself is a homemade mixture similar to Ammonal.

Read that first part again. “…high susceptibility to accidental detonation by shock, friction, sparks…”  What do you think bullets do?  That’s right.  They cause shock, friction, and sparks.

The significant implication for first responders is that unlike shock-resistant military grade explosives such as C4 or Semtex, TATP will detonate if hit by a bullet. In fact, that’s exactly what happened in the Bataclan Concert Arena.  The French media report, whether accurate or not, indicates that  as police moved in to engage the terrorists,  two terrorists self- detonated and the third suicide belt exploded when struck by police gunfire.

Both cops and armed citizens need to be aware of the fact that if we choose to take a shot against a terrorist wearing a bomb vest or belt, we should alter our traditional target areas.  If we shoot for the body, we will likely create the very type of explosion we seek to avoid.

Head shots are required. Rifles offer the best accuracy for shooting small targets like the head and should be close at hand whenever possible.  Does your training include head shot sized targets at distances beyond 100 yards?

Does your gear meet the test?  With a quality rifle, optic, and ammunition, we easily obtain 4 inch groups at 200 yards.

Where terrain permits, a move to prone position and the use of a Grip Pod or other bipod/ monopod to stabilize the shooter and rifle makes, accurate distance shot placement far easier.  The attachment of a MagPul Ranger baseplate for a thirty round magazine works very well as a monopod. Understanding that many have been trained or told never to rest your rifle on the magazine, we have done this for many years in our classes with zero malfunctions. Test it yourself as it is an excellent stabilizing method. Even better is two side by side in a Redi-Mag.

With a rifle, where a prone position is not feasible, have you trained for different support shooting positions? The leaning corner position keeps you inside of cover, with a minimum of the body exposed. The support side hand is pressed fingers up against the corner of the wall or building. The shooter leans against the support side hand and captures the front of the forend of the rifle with the thumb and forefinger. The gun side shoulder and forearm/elbow need to be inline, no chicken wings extending well out of cover. Combined with  a fast adjustable two point sling such as a Savvysniper, employing this “leaning rest” position, you can hold for extended periods and deliver accurate fire.

What if you do not have a rifle? We run distance handgun training and work on accuracy at 50-100 yards and beyond. I am not suggesting we get head regular shots at 100 yards but we are able to effectively get solid body hits.     One of the great shooters made this comment: “Nothing is further away, it is just smaller.” In the context of handguns especially, I have found this to be sage advice.

The further we can engage this threat, the greater protective buffer we can create.

Ready or not the enemy is here and waiting his moment.

Will we choose to prepare?

Thanks to Jeff for providing this sage advice.  If you would like to contact Chief Chudwin, use my contact page and I will forward the message to him.