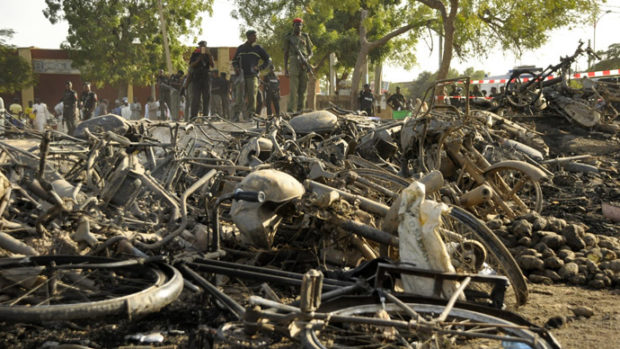 Did you hear about the Nigerian Mosque bombing/shooting on November 28th?  If not, you’ll want to pay attention.  It was one of the most deadly terrorist attacks this year; 120 died and 270 more people were injured.

Read about it HERE.

The tactics in the attack were simple and worked well.   The terrorists set up people with rifles outside a building (in this case a mosque where the Imam denounced the terrorist group Boko Haram) that is crowded with people. They then sent several suicide bombers inside (or could have placed unattended bombs inside instead).

The attack plan was simple.  Blow up bombs. Shoot people who are fleeing the chaos.

This tactic has been used in school shootings and terrorist attacks all over the world. The killers at Columbine planned to do exactly this, but their bomb didn’t explode. What is commonplace around the world will eventually be commonplace here.

Think it through. How would you defeat an attack like this?

On an individual level, this would be almost impossible to survive, let alone stop in advance.  If we see these style attacks coming to America, we will need a group effort to stop them. Each large target would have to come up with an individual response plan utilizing the skills of its members.  Here’s what has to happen:

1) Detect/Neutralize the Bombers.  Ant large entity would have to have staff trained in explosive detection and threat profiling.  They would have to place armed and trained staff at every entrance.  The staff must be capable of delivering deadly force immediately to prevent the bomber from detonating.

2) Deploy overwatch/countersnipers.  The best way to deal with snipers is to have pre-placed countersnipers watching the scene.  This would likely require the assistance of several neighboring business to provide rooftops or hide sites.  When the terrorists start shooting fleeing innocents, the counter snipers take out the terrorists.  Problem solved.

3) Aggressively employ cover fire to facilitate escape.  Both of the first two suggestions require massive logistical coordination, resources, and manpower.  If the target is unwilling to provide such resources, what can you (the average citizen) do?  The key thing to remember is that things like this happen.  When making your escape, be prepared to lay down heavy cover fire to facilitate your and others’ exits.  You will need to keep the terrorists heads down for awhile so they don’t kill all the fleeing people.  Are you capable of doing that?

You won’t be if your EDC gun is a little .380 auto with no spare ammo.  The normal CCW carrier rarely considers that he may have to employ techniques like using cover fire.  While it certainly isn’t the most likely gun use scenario, it does happen.  I prefer to be prepared in case it happens to me.

Most people will ignore the advice in this article thinking “it won’t happen here.”  I think that in the future, scenarios like this one will become far more commonplace.  It’s best that we think about them now and pre-plan our responses so that we don’t end up like the 120 Nigerian mosque worshipers who ended up in body bags.