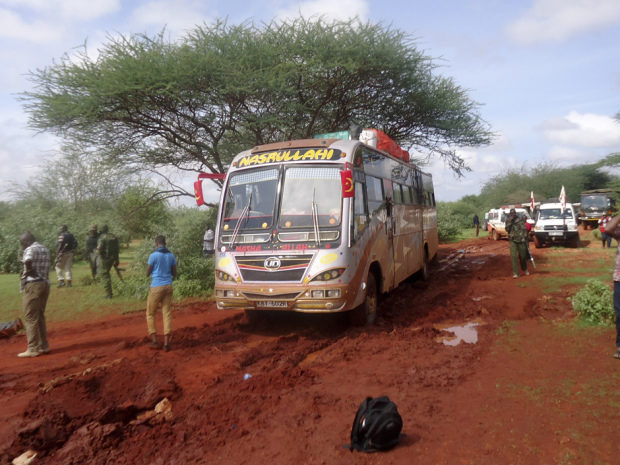 Read the story below:

In Kenya, Al-Shabab gunmen slay 28 bus passengers who could not recite an Islamic creed

A band of 20 Islamist terrorists armed with automatic weapons tried to stop a bus filled with local citizens in Kenya. The driver heroically kept driving. The terrorists raked the bus with gunfire before bringing it to a stop by using an RPG round.

Terrorists quickly take control and separate Muslims from non-Muslim passengers. The non-Muslims were ordered to lie face down on the road as they are systematically shot in the back of the head.

This story hit me pretty hard. I’ve spent a lot of time on buses just like this one riding through rural Kenya.   It could have very easily been me on that bus.  This is one of the few “unwinnable” scenarios that everyone will occasionally face. You are unarmed and have no friends on the bus with you.  Have you considered what you might do?

I find it curious here that no one tried to fight or escape. Odds of winning are non-existent when facing 20-1 superior numbers, but why not try? You know you will be killed if you comply. There is a small chance you will get away if you fight or flee. The choice is pretty clear to me.

I’m going to use my folding knife to get one of terrorists’ guns and I’m going to take as many out as possible. I’ll probably be killed, but I’ll most certainly be killed otherwise. Who knows, with dumb luck it’s possible that I survive.

In any event, every terrorist I kill will reduce the chance that innocent people will be targeted in the future. My attack may also provide the distraction needed for a couple other  people on the bus to escape.  If more people fought back, these terrorists might start thinking twice about targeting civilian passenger vehicles.  If I’m going to die anyway, I may as well make my death as meaningful as possible.  Laying in the dirt as I get shot in the back doesn’t accomplish that goal.

I can’t tell you what to do if you are thrust into a situation like this.  I can tell you that there are a few times when compliance has a very poor record for ensuring your safety.  In my study of events like this terrorist attack, I’ve noticed some very clear trends.  If the terrorists/criminals start doing any of the following, your chances of survival are extremely low:

2) They order people to the ground

3) They start searching hostages for weapons

5) They move people to another location

Those are my “go” signals.  I may fight.  I may flee.  I may make up some other strategy on the fly.  But when those things start happening, I know I won’t meekly comply.

Unfortunately, no one on the bus thought like I do. Have you considered what you might do in a similar “against all odds” situation?  You should.  Because if you don’t develop your “go triggers” in advance, you’ll end up just like all the poor folks on that bus in Kenya.