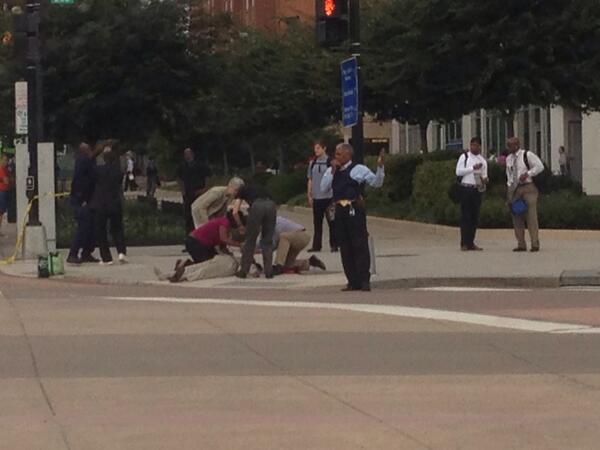 Officials are remaining tight lipped about the Washington Navy Yard active killer incident that occurred a week ago.  Not much information about the attack is being released.  Most sources have determined that the killer gained access to the facility where he worked by using his own pass card.  He carried a sawn-off Remington 870 in a duffel bag to a fourth floor bathroom where he removed it.  He started firing down a hallway and then from an elevated position down into a full cafeteria below.

At some point during the attack, he killed an armed security guard, took his Beretta 9mm handgun, and continued the rampage until he was shot by responding cops approximately 35 minutes later.

Even though we don’t have much information, there are a few known facts that we can use to make better decisions in the future.  Here are a few of the “lessons learned”:

Injured person being treated on the sidewalk outside the building

1)Battlefield Pickup- In the Active Shooter Response classes I teach, I always talk about the idea of Battlefield Pickup in a multiple attacker situation.  That means using your CCW piece to kill one of the shooters and then using his weapon (if yours is inferior or runs out of ammunition) to engage others.  The killer here used battlefield pickup as well.  When he ran low on shotgun ammunition, he killed a security guard and took the guard’s handgun.

Think about that for a minute.  Would you be an obvious target in an active shooter event?  You would be if you were open carrying your handgun (cops included).  What other indicators could a killer use to identify you as a person who is carrying a gun?  That NRA belt buckle?  Your 5.11 tactical vest?  Get rid of that stuff or save it for when you go to the range.  You want to blend in, not stand out in any situation like this.

Aaron Alexis may have picked up and used victims’ weapons: investigators

2) Active Killers don’t “just snap.”  There are often multiple warning signs the precede the attack.  It’s up to each of us to recognize these warning signs and be ready to act.  It’s our best chance of stopping these incidents prior to the actual shooting.

He played computer games “at the nighttime and all day,”

3) Threats from above. Most people have never trained how to deal with an attacker who is in an elevated position.  Traditional use of cover won’t work as well.  General guidelines about use of cover suggest that having an arm’s length distance between your body and the cover is optimal.  If you are too close to your cover, you will be more exposed to the threat.

The opposite is true when you are taking fire from above.  That’s one of the only times that you want to get as close to your cover as possible.  You will be less visible that way.

“He was shooting down from above the people,” one law enforcement official said. “That is where he does most of his damage.”

4) Denial. People who hear the sounds of gunfire often deny the reality that is occurring.  They attribute the gun shots to other, more normal, events.  It has happened in every active shooter event I have studied.  It happened here too…

“As the noise that some thought sounded like construction work continued, the realization set in that a gunman was firing on them.”

“One man who said he was at his desk on the second floor when the shooting began recalled hearing a loud noise “like someone dropping an old metal desk.”

How many times does someone “drop an old metal desk” in your office?  If you hear noises that sound like gunfire, assume it is gunfire and act.

5) You are on your own.  In events like these, you are responsible for your own rescue.  The systems that people commonly rely on to prevent or respond to such incidents all failed.

Gun control didn’t work.  The event happened in a “gun free” building in a city with the strictest gun control laws in the country.

Armed security didn’t stop the killer.  In fact, the security on site merely supplied him with additional weaponry.  How well do you think the unarmed 70-year old security guard in your office can protect you?

The police were ordered to leave.  Cops were on scene less than 15 minutes after the shooting.  Even 15 minutes is a very long response time when you are being shot.  Yet the cops on scene didn’t engage the gunman until after he had been shooting for 35 minutes.  The cops aren’t going to save you.

As my friend Dave Spaulding says: “You must be an active participant in your own rescue.”

Undoubtedly, we will learn more about the shooting as time passes.  I will update you if any additional useful information is released.  Until then, ponder these ideas and come up with a plan of action so that you can make it out alive if a killer targets your workplace.