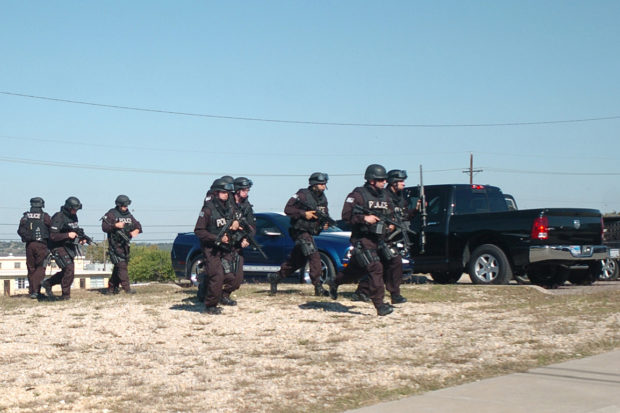 While the investigation is still ongoing and the military has effectively placed a gag order on the personnel involved, some details are being released about the April 2 shooting.  A soldier (who will not be named in this article) killed three people and wounded 16 at his workplace at Ft. Hood, Texas before turning the gun on himself.

If you aren’t caught up on the incident, this recent article from the New York Daily News summarizes the incident quite well. 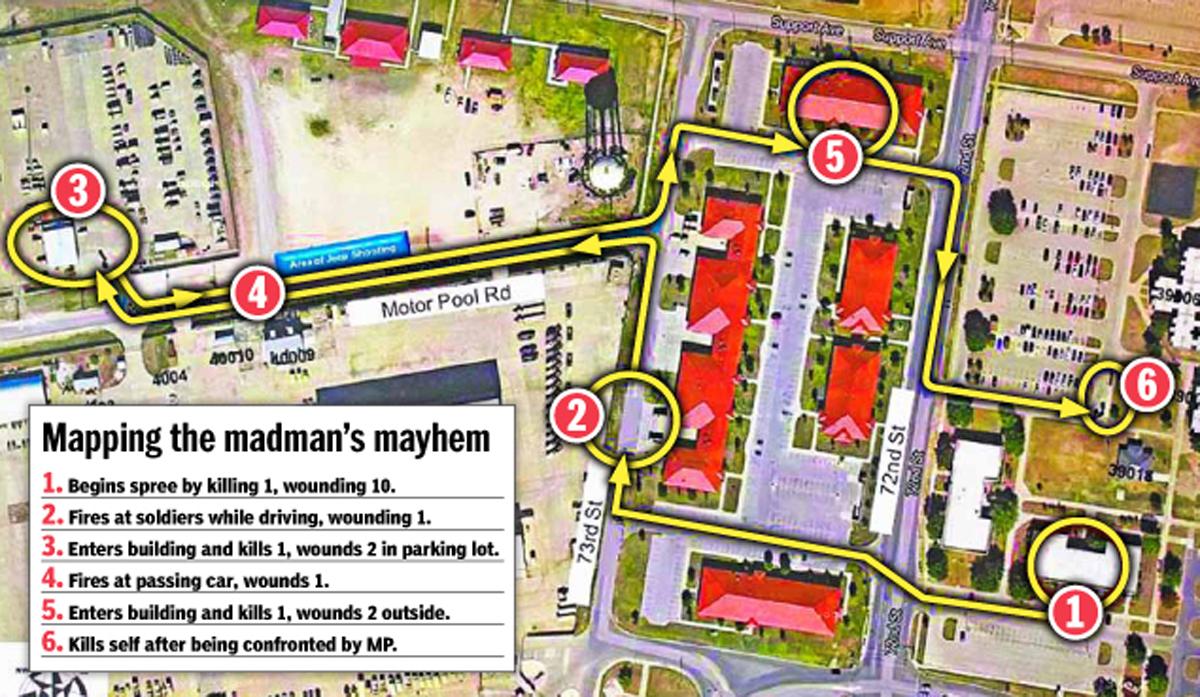 Here are a some important tactical considerations for anyone who wants to be better prepared for future active killer events:

1) The “Lockdown” or “Shelter in Place” Paradigm must change.  Read about what happened below:

“Sgt. First Class Danny Ferguson, a native of Mulberry, Fla., who had just returned from Afghanistan, died while trying to keep the shooter out of the room, Kristen Haley, also a soldier, told WTSP-TV in Tampa, Fla.

“He held that door shut because it wouldn’t lock,” said Haley, who was nearby when the shooting broke out. “It seems the doors would be bullet proof, but apparently they’re not. If he wasn’t the one standing there holding those doors closed, that shooter would have been able to get through and shoot everyone else.”

Numerous people ran to hide in a room that could not be locked and had no exits.  A brave soldier dies while physically holding the door closed with his body.  Does that remind you of any other similar happenings during an active killer event?  It should.  In 2007’s Virginia Tech massacre, Professor Liviu Librescu, died holding the door to his classroom closed in an identical manner.

While they idea of lockdown does have merit in some situations, hiding in a room with no exits and no way to be secured is a very poor defensive decision.  Fleeing or physically attacking the shooter would likely lead to better overall outcomes.

2) You will be on your own for a significant length of time.  Many police departments brag about their excellent response times in order to convince you to let them solve the problem.  Even if response time is good (one active shooter study showed an average police response time of three minutes), the response time merely describes the time between when the police get the call and when they arrive on scene.

The calls to police in these high stress environments are not immediate.  Some studies show that active shooting events are in progress for between four and six minutes before police even get the first call!  Once they arrive on scene, they have to enter the building (which may be barricaded) and find the shooter.  That takes more time.

Although response times were respectable in this incident, look how long it took to resolve:

“The MP arrived in the parking lot about four minutes after the first 911 call, and she began to look for the suspect with other law enforcement officers. A short time later, she saw the suspect. The shooting spree was over in about 15 or 20 minutes.”
– CNN
“Gray said the duration of the shooting from the first 911 call to the notification that the shooter was down was about eight minutes in length”
–NBC News

Even with the rapid response of a trained military police unit, it still took eight minutes from the time of the call until the killer was dead.  Add several more minutes before the call was even made and you find that the “four minute” response time turns into something more like 15 minutes.  That’s a long time when someone is trying to kill you.

Unless a police officer or armed citizen is already on scene, they won’t be getting there in time to stop the majority of the killing. You are truly on your own and responsible for your own safety.  Make intelligent choices.  You won’t likely be saved by the police.

3) Talking and negotiation should be a tactic of last resort when responding to an active killer.

“Sgt. Owens tried to verbally talk him down, and that’s when the shot was fired,”

Negotiation has not had a very high success rate stopping active killers.  If you think that you’ll be able to “talk the killer down,” you are likely mistaken.  Talking should be the absolute last option, not the first.

4) Shooters tend to be prepared and will likely have significant quantities of ammunition.  The shooter here had a full sized S&W .45 pistol.  He fired at least 35 rounds.  That means at least two spare magazines and maybe as many as five, depending on the exact model of the gun.

“Gray said the alleged shooter fired an estimated 35 rounds of .45-caliber ammunition during the rampage.”

Think about that for a second…

What are your chances of winning a gunfight against a trained soldier armed with a full sized pistol and several spare magazines using the Ruger .380 (that you haven’t shot since last summer) in your back pocket?  The odds aren’t good.  If you want to be a player at this level of violence and carnage, you better have a “real” pistol and some good training.

That doesn’t mean that things are hopeless if your are unarmed or just have a “mouse gun.”  When the killer shoots that much, he must reload sometime.  This shooter likely reloaded at least twice.  Be able to recognize the signs of an unloaded weapon and be ready to ferociously close the distance and attack as soon as you see it.

5) The trend of mobile active shooters continues.  Read the comments below:

“Around 4 p.m., he walked into a command building and opened fire, then left, got in his car and began driving while still firing shots. He got out of his car and walked into another building, still shooting.”

One of the first recent active killer events where the suspect remained mobile using a car was the Santa Monica College shooting. The killer there confused police by driving away from the crime scenes and staying one step ahead of apprehension.

The killer at Ft. Hood used the same tactic.  I believe these shooters are modeling their tactics off of the highly successful mobile tactics used by the terrorists in the 2008 Mumbai, India attack.

Mobile killers make police response exponentially more difficult.  Cops responding to these events need to be alert for escaping suspects in vehicles as they approach the scene.  First line supervisors should prioritize roadblocks around the crime scene, both to ensure that ambulances and EMS vehicles can get to the scene, as well as to limit the killer’s escape opportunities.

6) The shooter may not have a gun in his hand.

“Within 15 minutes military police responded. Milley said a female officer confronted Lopez in a parking lot near the second building. He approached the officer but stopped about 20 feet from her and put his hands up. Then, Milley said, the gunman reached into his jacket and pulled out his weapon. As the officer opened fire, the man shot himself in the head.”

One of the consistent themes of active shooting events is that the killers study past incidents and adapt their tactics so as to perform better than their predecessors.  Killers now know that most police officers are trained to run to the sound of the gunfire and quickly engage the shooter.  Having a gun in your hand while this happens can be hazardous to the murderer’s health!  This is one of the first times that I’ve seen an active killer conceal his weapon as he commits the crime or makes his escape.

If you are responding to an active shooter event, push your dispatchers for the best physical descriptions they can give.  If you are calling the police in an active killer massacre, pay extra attention to getting the killer’s description right.  Get age, sex, hair color, race, clothing description and direction of travel relayed to the dispatchers as quickly as possible.  This is critical information that needs to be shared with responding officers.  The killer may be walking (or driving) away from the scene normally and may not be actively killing innocent people on your arrival.

7) The killing stops as soon as the killer faces effective resistance.  We see it time and again.  As soon as the killer is confronted by someone intent on doing him harm, he either surrenders or shoots himself.  These killers aren’t looking for a fight.  They are looking for a body count.  Once they realize their killing spree is going to be thwarted, they give up…either by surrendering or killing themselves.

Resistance doesn’t have to be with a gun.  A significant portion of these killers are stopped when UNARMED citizens tackle them.  The resistance only has to be effective.  Whether that’s with your legally concealed firearm or your fists, the fastest way to end these killing is to aggressively fight back.

That single fact may be the most important take-away of this article.  Somehow, we need to encourage people to fight these madmen instead of cowering in bathrooms and under school desks.

Help me spread the word.