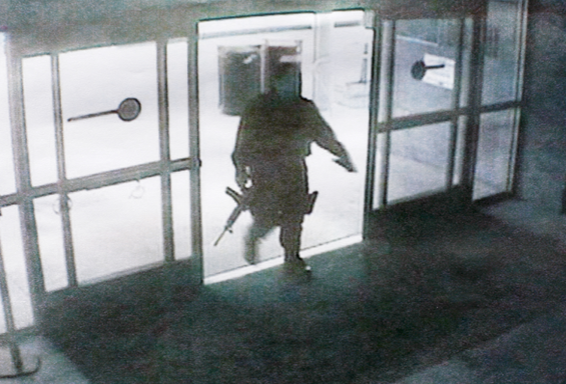 Surveillance video of the shooter entering the school library

Last Friday, our nation experienced yet another active killer targeting a school.  The shooter was killed by police as he shot up the library of  Santa Monica College in California.  His 13-minute long streak of violence killed five people and injured five more.

Details continue to emerge, but early reports indicate that the shooter:

– Killed his brother and father then set his house on fire

– Carjacked a woman driving past his house and ordered her to drive to the college, having her stop so that he could shoot other people along the way

– Shot one woman outside the library 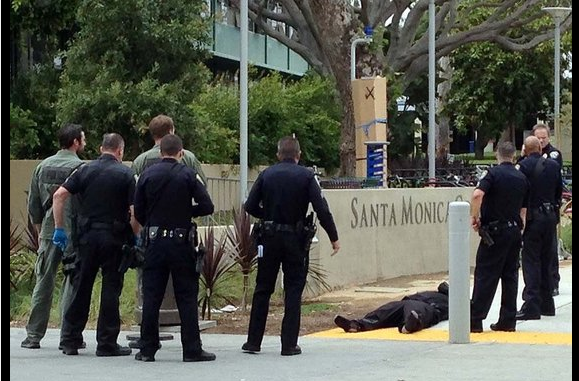 For more details, check out the links below:

The best way to save lives in future shootings is to study the tactics of past shooters and learn how to effectively counter them.  With that goal in mind, let’s take a look at some of the issues highlighted by this shooter…

1) Evolving Tactics- Active Killers study past events and try to learn from the “mistakes” made by previous shooters.  Cops and school personnel study past events to develop tactics to counter or eliminate the threat.  Tactics are constantly evolving on both sides.

This is one of the few mobile, random active killers in the USA.  There have been several other active killers who have  shot at people while fleeing the cops, but this is one of the few where the killer actually planned to use a vehicle in his killing spree.  Killers know now that cops will not wait for SWAT to arrive in an event like this anymore.  Responding cops are now taught to take the fight to the shooter.

When killers use vehicles, it makes it difficult to pin down their position and flood the area with cops.  They are essentially using the concept of maneuver warfare as a force multiplier.  The terrorists in Mumbai used the same tactic very effectively.

Most cops don’t train to fight against a mobile shooter.  That must change.  I predict an increase in technological solutions like audible “shot spotters” that pinpoint the sound of explosions and instantly broadcast the location to responding cops.  Other techniques might be an enhanced use of air support (including drones) to track shooters in these operations.  Cops are soon going to have to be as well versed in using technological innovations as they are driving their patrol cars.

Think about how you would respond if you were a cop and were getting reports of multiple shootings within the same one-mile area.  Would you initially think about active shooters or would you think it was an odd coincidence or perhaps a gang war?

If you aren’t a cop, think about your tactics.  What would you do if a man pointed a rifle at you and ordered you to drive him to a school?  Would you comply, shoot him, drive away, run him down, or crash the car?  Lots of options here.  It’s best to have a plan in advance.  Have you ever trained to shoot at someone who is firing from a moving vehicle?  If the guy was spraying random shots, would it be best to engage or to seek cover and wait until he left the area?

2) Active killers generally use long guns and have plenty of ammo for an extended fight.  The shooter here used an AR-15.  In the photos of the evidence, I counted at least eight 30-round magazines.  The Santa Monica police chief stated that he was wearing body armor and carrying approximately 1300 rounds.  Are you prepared for that fight?  It’s you and the CCW gun you are currently carrying against a dude armed with an AR-15 , ballistic vest, and more than 1000 rounds.  Those aren’t good odds.

If you are a cop, do you carry a rifle with you?  If you don’t, that needs to change.  What tactics can you use to maximize the utility of a small handgun when fighting an opponent with a rifle?  Have you trained to deal with opponents wearing body armor?  What is the farthest distance you can reliably make a head shot with your CCW pistol? 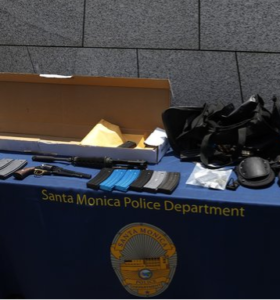 3) Fleeing is generally the best tactic.  Because the events happened so quickly, most students didn’t lock down or hide.  They simply fled the shooter…and most didn’t get shot.  Surprisingly, very few people were actually injured given the reported volume of fire.  If you are caught up in one of these events GET AWAY!  Lock down, hide, or fight only when you can’t safely make your escape.

4) An odd choice of weapons.  Did you notice the pistol shown my the Santa Monica Police during the press conference?  It appeared to be a muzzle loading cap and ball revolver (replica of a Civil War-era firearm).  If you were a cop on the scene, would you know how to de-cock, clear, and make that weapon safe?  How about for the shooter’s AR-15?  Do you know how to operate one of those? 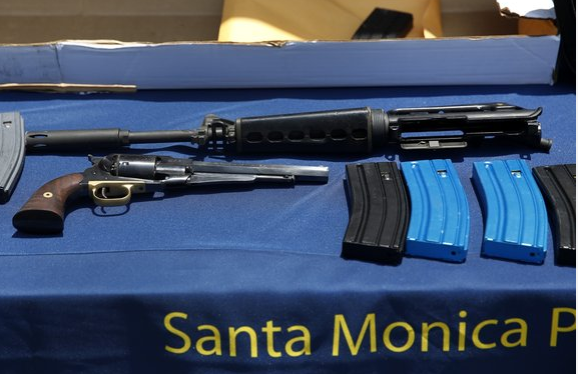 Do you know how to operate this pistol?

Many of my readers don’t carry guns on a regular basis.  Would you folks know how to use one of these weapons to stop the shooter in a “battlefield pickup” scenario?  What if the shooter abandoned or dropped one of those weapons?  Could you scoop it up and immediately make it fire if given the opportunity?  I bet there’s not many of you who are familiar with the workings of a cap and ball pistol.  If you want to succeed in this game, you must instantly be able to use any weapon you may acquire.

Your homework assignment for this week is to first learn how to operate an AR-15.  It is a type of weapon very commonly used by active killers (Batman movie killer, Sandy Hook, etc).  You need to learn how to run one.  You also need to learn something about making a single action cap and ball pistol operable.  Learn how to tell if the gun is loaded and whether each cylinder has a percussion cap.  Recognize that you will have to cock the hammer back before you pull the trigger.  When you fire that type of weapon, you will be temporarily blinded by the large quantity of smoke.  These are all things you should know.

Pay attention to the additional details in this case as they are revealed.  There is a lot to learn here.