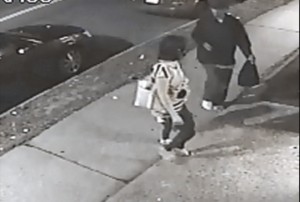 A Massachusetts woman was stabbed and her young child was briefly held hostage by a knife-wielding criminal outside of a grocery store.  The entire incident was caught on surveillance video.  Before reading any further, click on the link below and watch the short video.

This crime was tragic, but preventable.  The woman’s reaction was not unusual.  Panic and fear cause people to do strange things.

Let’s take a look at what she could have done to avoid this crime:

Train yourself to look for and recognize predatory movement patterns.  The guy making several passes walking by the same place and his quick turn around should have alerted the woman that something was wrong.

Trust your instincts.  If you get a bad feeling about a situation, don’t try to rationalize or ignore it, ACT!  When the woman pulled up in the car, she should have done a quick scan of the sidewalk, the street, and the store she was entering.  She should be looking for anything that doesn’t seem right.  She should have seen the man, but likely didn’t.  She could have stayed in the car until he was a safer distance away or she could have driven off if she was paying attention.

2) Minimize distractions when you are in a public place.

Look at the video again.  When did the man make the decision to attack?  Precisely the moment he realized the woman was distracted when getting her daughter out of the car.  The best course of action to take if you have a young child like this is to:

-scan your surroundings before exiting the car

– get out of the car and lock it

– walk to your child’s door

– do another scan before unlocking it

– quickly get your child out of the car

If the woman would have locked the door and done a second scan, the man would have likely moved on to an easier victim.  If he did choose to press the attack, the child would be relatively safe in the locked car and she would have a little more time to access a weapon or move to place the car as a barrier between herself and the robber.

3. If you have children, factor them into your self defense decisions

Most people viewing this video would express shock that the mother would just run away from her daughter and leave her in the hands of a criminal.  It’s really not uncommon to see strange reactions like this.  Without prior thought and planning, the body tends to default to one of two likely reactions when faced with overwhelming stress…freeze or flee.  This woman fled because she didn’t have a pre-planned response and didn’t have time to fully evaluate all of her options.

Parents think a lot about their kids, but it has been my experience that they don’t think about what to do with their kids if the are attacked.  If you have children, create a code word that signal an emergency and train your children to obey your commands without question after you use the code word.  If the woman used a code word like “Emergency” with her daughter and then told her daughter to either run into the store or get back into the car, the results likely would have been better for her.

Although potentially painful to consider, you must have a plan to deal with a kidnapping as well.  Criminals know that kids are easier prey than adults.  They also know that if they snatch your kid, you’ll likely do whatever they want.  You need to prepare for that possibility.

While you are at it, teach your kids how to fight an abduction attempt.  Shrugging off clothing (or a backpack) like the little girl did in this case works a surprising amount of time.  So does holding on to inanimate objects like bikes or cars.  If these tactics fail, teach your children to bury a finger into the eye of the attackers as deeply as possible.

In almost every women’s self defense class I teach, I ask my students what they would do if they are ever attacked.  About 80% of them say “I would run away.”  How did that work for this young mother?

Everyone needs to acknowledge reality.  The average violent criminal is a male aged 16-25.  Can you outrun the average teenage boy?  If you can, great!  Flight would be a good option for you.  If not, you need another plan.  Even if you are a fast runner, you can’t flee every situation.  What if you were trapped in a tight hallway or indoor room?  What if you had kids (like this woman did) that you don’t want to leave behind?  What if you were wearing high heels or flip flops?

I hate to rain on your parade, but running away isn’t the best option for most people, male or female.  Get some good physical skills training.  Carry a weapon (or weapons) if it is legal and you have training.

Don’t go around in public like a mindless automaton.  Pay attention to what’s going on around you and have a plan for every eventuality.