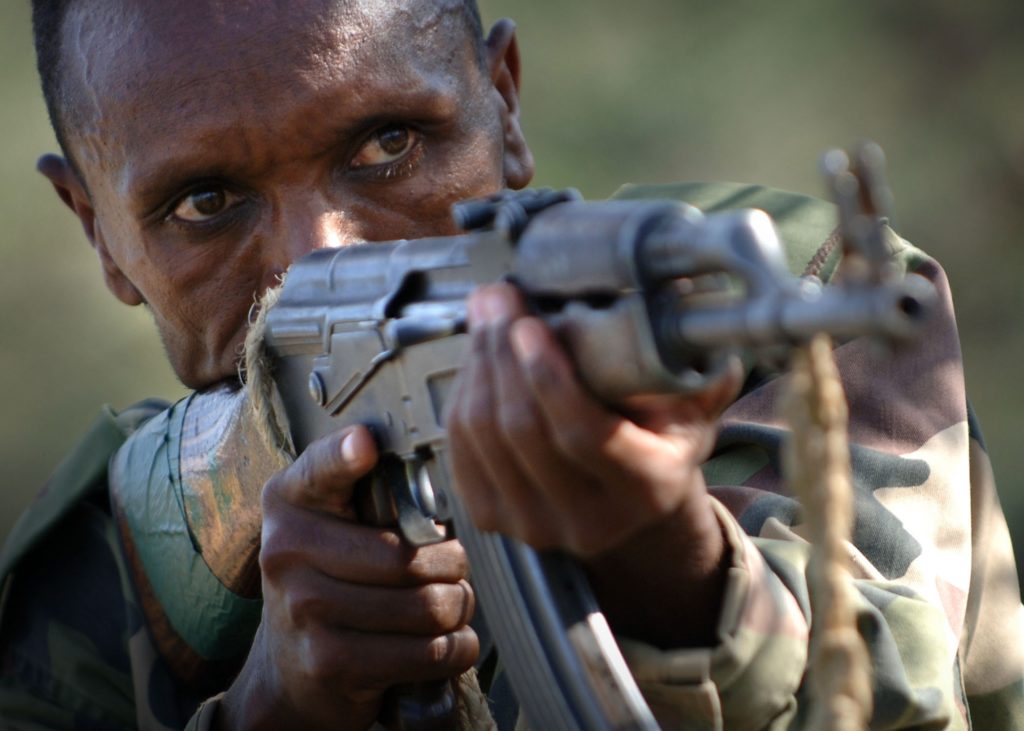 As the taxi driver saw the roadblock and screeched to a halt, a man wearing a tattered uniform leaped out of the bushes and stuck his AK-47 through my open car window.  I remember noticing that the safety was off as he jabbed my cheek with the muzzle and said “Don’t move” in halting English.

What would you do if you were placed in that situation?  I’ll tell you what I did.  I complied with the disheveled African cop who was jamming the AK in my face.  I quickly ran through the options in my head.  I was in Tanzania and didn’t have a gun.  Do I draw my hidden knife?  Do I attempt a disarm?  Do I feign compliance and flee on foot?  All of those were the wrong answer.  I complied with the soldier’s demands and I’m still around to tell the story.

I’ve been reading quite a few articles and Facebook posts lately criticizing crime victims for complying in the face of an armed threat.  The writers talk about how compliance is cowardly and how resistance (preferably armed resistance) is the only “proper” course of action when one is attacked or threatened with a deadly weapon.

Making statements like that is both short-sighted and wrong.  While there are many situations that are best solved by armed resistance, there are some where compliance is a better option.  I know I’m going to lose a few readers who will instantly label me into the “He’s a cop.  Of course he’s going to tell you to comply” camp.  Those of you who know me and those of you have been reading my articles for a while should know that I’m the last person on Earth to criticize armed resistance….when it is appropriate.  If you don’t believe me, see my articles HERE and HERE.

We start having problems when we listen to “experts” who have never truly faced violence and have never had to make the comply/resist decision when their lives are  at stake.  It’s easy to talk about resisting an attacker armed with a gun from the safety of the computer keyboard in the writer’s cozy home.  It’s a bit different when there is a gun wielded by a crazy man stuck in your face late at night.

Let me tell you the rest of the story I started above.  It’s a story where I’m not the hero.  It’s a story about a time in my life where I chose to comply in the face of an armed threat rather than resist.  And it’s ultimately a story that has a positive ending.

In 2008, I decided to climb the highest mountain in Africa.  Mount Kilimanjaro is in Tanzania and stands 19,341 feet (5895 meters) above sea level.  For perspective, that’s more than a mile HIGHER than those big mountain peaks in Colorado.  The trek up the mountain takes between five and eight days (depending on route) and starts from the desert plain at roughly sea level.  It makes for a difficult hike, with not much time to acclimate.  I booked a trek with a licensed guide and made my travel plans.

While looking for airfare, I found that I could save over $2000 if I flew into Nairobi, Kenya rather than the closest airport to Kilimanjaro.  Nairobi is about an eight hour public bus trip away from the town in Tanzania where I was going to start my climb.  I elected to fly into Nairobi and take the public bus across the border rather than paying the extra money.

I scheduled a couple extra days in Nairobi and did some sight seeing at some nearby game parks.  On the morning I was scheduled to depart from Tanzania, I caught a cab to the bus station and hopped on my bus.  It left on time and we headed off across the African plains.  It was a “luxury bus” and a fairly comfortable ride.  After a few hours of watching the scenery, I put my Ipod headphones on and leaned up against the window to take a nap.  Shortly thereafter, I was awakened by a deafening crash and a huge jolt.  A dump truck hauling gravel for a road construction project had backed into our bus as it was traveling about 60mph down a remote highway.  The bus shuddered to a stop and the driver exited without ever even checking to see if any of his passengers were injured.

I looked around and saw that most of the passengers were stunned, but none had any obvious injuries.  Everyone was frantically speaking in Swahili.  I was the only foreigner on the bus and couldn’t understand what was going on.  A young college girl next to me spoke English and said to me “Get off the bus.  There’s going to be a fight.” 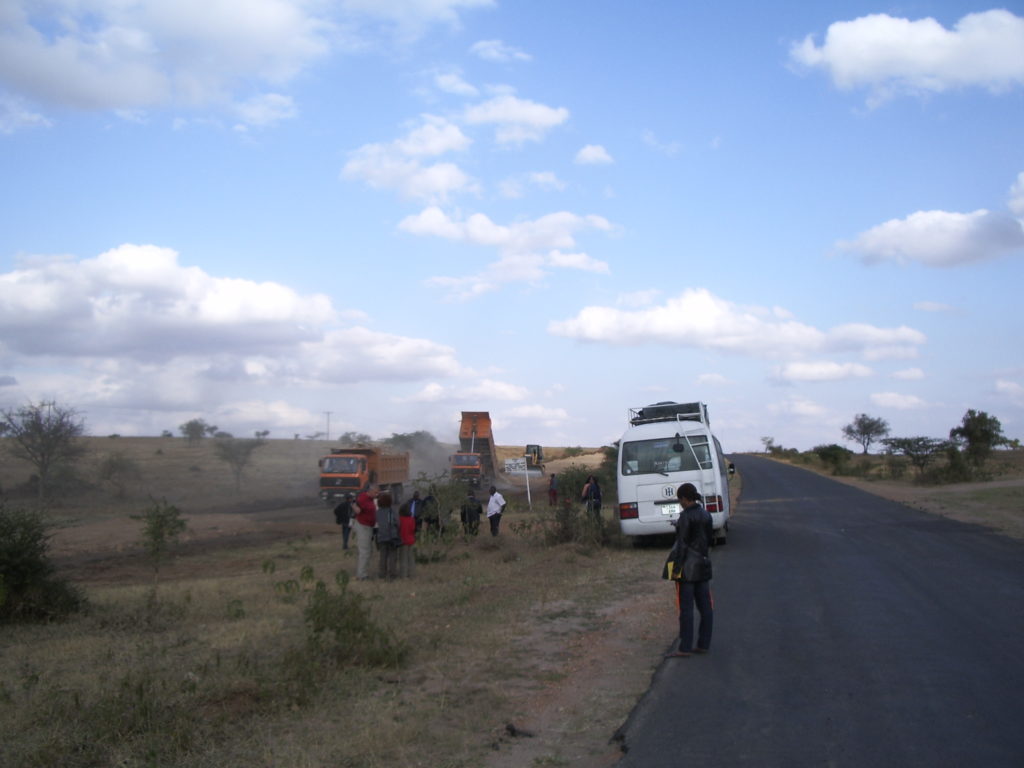 Just before the fight began….

All of the passengers disembarked and watched as the driver of our bus and the dump truck operator screamed at each other.  They yelled, then began pushing each other, and then a full-on fight broke out.  All of us watched as the two drivers struggled and punched each other in the heat of the African plain.

The English-speaking college girl translated the fighters’ words for me.  She explained that neither driver had money to pay off the police if they were called.  Instead of paying bribes to the corrupt cops, the drivers were going to fight.  The loser would accept fault for the accident when they turned the damage in to their respective insurance companies.

The two men fought for about 20 minutes along the side of the road.  Neither landed a single good punch.  It was mostly just pushing and stand-up wrestling.  They suddenly stopped, shook hands and then separated.  The driver of our bus dug a crowbar out of the luggage compartment, pried the damaged quarter panel away from the bus’ rear tire and we were on our way again.  It was mind boggling, but you quickly learn to accept such events as commonplace when traveling through remote Africa. 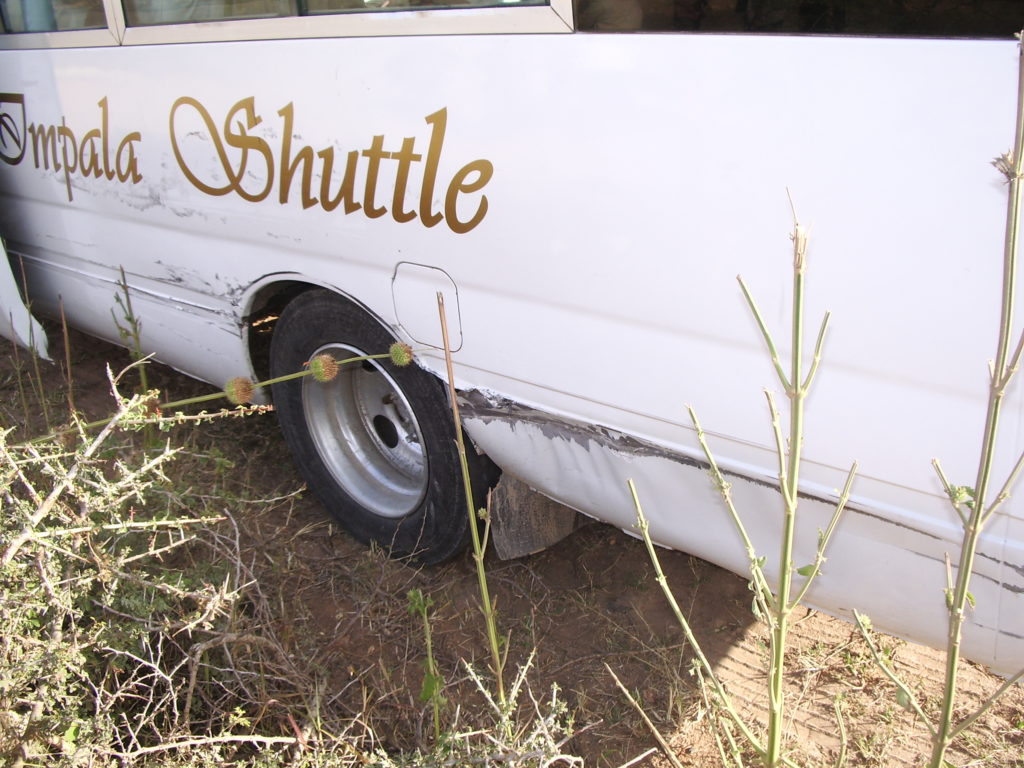 The fight has some lasting consequences, however.  Because of the delay, I missed my connecting bus in a little border town in Tanzania.  It was 11 pm and I was stuck in a dodgy African border town with no accommodations.  No more buses were running.  I was about 100 miles from my hotel.  My choices were to either spend the night in the border town and wait for a bus in the morning or hire a taxi to get me to my destination.  I chose to go with the taxi.

I found a taxi driver who spoke relatively good English.  He quoted me a $30 fare for the 100 mile drive.  I readily accepted.  As I got in the unmarked cab, the driver suggested that I ride in the front seat with him.  He said that if people saw I was riding in back they would assume that I had money and would target us for a robbery.  By sitting up front, it just looked like I was the driver’s friend and it would attract less negative attention.  I took the driver’s advice and hopped in the front seat for the two hour journey.

It was after midnight and I was both tired and hot as we drove to my destination.  I had my window down because the cab didn’t have any air conditioning.  There were few cars on the road and we were making good time when we rounded a curve and saw something in the middle of the road.  The driver skidded to a stop when he noticed a kerosene lantern in the road sitting on top of several pieces of lumber with huge metal spikes driven through them.  The spikes were pointed up to flatten car tires.

As soon as we stopped, a Tanzanian cop jumped out of the bushes and jabbed me with the AK-47.  A thousand thoughts crossed my mind.  What should I do?  Even though I wanted to fight, my gut told me to comply until I had a better opportunity.  I didn’t know if the armed man was alone or if he had additional backup hiding in the bushes.  Even if I killed him or took his gun, I still might have to fight several of his buddies.  It didn’t seem like fighting would have a high likelihood of success.

He kept the AK-47 pointed at my head as he explained in poor English that I didn’t have a permit to be on the road we were traveling.  I knew that no such permit was necessary.  I also knew that the Tanzanian National Police make approximately $7 US dollars a day.  Any foreigner with enough money to hire a driver would likely have more money than the cop makes in a month as pocket change.

I evaluated my options and decided to play it cool.  I knew the cop could shoot both of us on this rural highway and have us buried before sunup.  I kept my hands in sight and told the corrupt policeman that I was sorry.  I asked him if I could pay the “fine” on the spot.  He lowered the gun and told me that the fine for my “offense” was 300 Tanzanian Shillings.  It was the US equivalent of  25 cents.  For a quarter, the dude was ready to shoot me in the head.

I paid my “fine”, the cop moved the roadblock and we were again on our way.  For the rest of the trip, I just kept replaying the incident over and over in my mind, wondering if I should have handled it differently.  I analyzed what prompted me to make the decision to comply in that situation.

While I admit the thought of him having possible friends hiding in the bushes was a big consideration, the main factor that kept me from fighting was simply a gut feeling.  The guy was dangerous, but seemed rational.  I had to think of his motivation.  If he wanted to kill me, he could have done so without uttering a word.  No, he wanted something else.  And I was willing to give that up in exchange for not having to go against a cop with a rifle using my Spyderco folding knife.

I can say without hesitation that I made the right decision.  But it wasn’t heroic.  It wasn’t badass.  It was just using my brain and my instincts to keep myself safe.

I would never presume to tell you what decision to make when you are facing the threat of lethal violence.  All I can tell you is that you should do what your gut tells you to do.  Every scenario is different.  You may make the wrong decision or you may get away without injury.  It’s hard to predict.

Compliance doesn’t always ensure your safety, but sometimes it’s the best option given a whole lot of bad choices.  If you make it through the encounter to live another day, I’d tell you that you made the right choice.  You are the only one who can truly make the decision to fight, flee, or comply in the face of danger.  Some internet experts may think that complying isn’t an option…but those guys probably haven’t been hit in the face with the barrel of an AK-47. 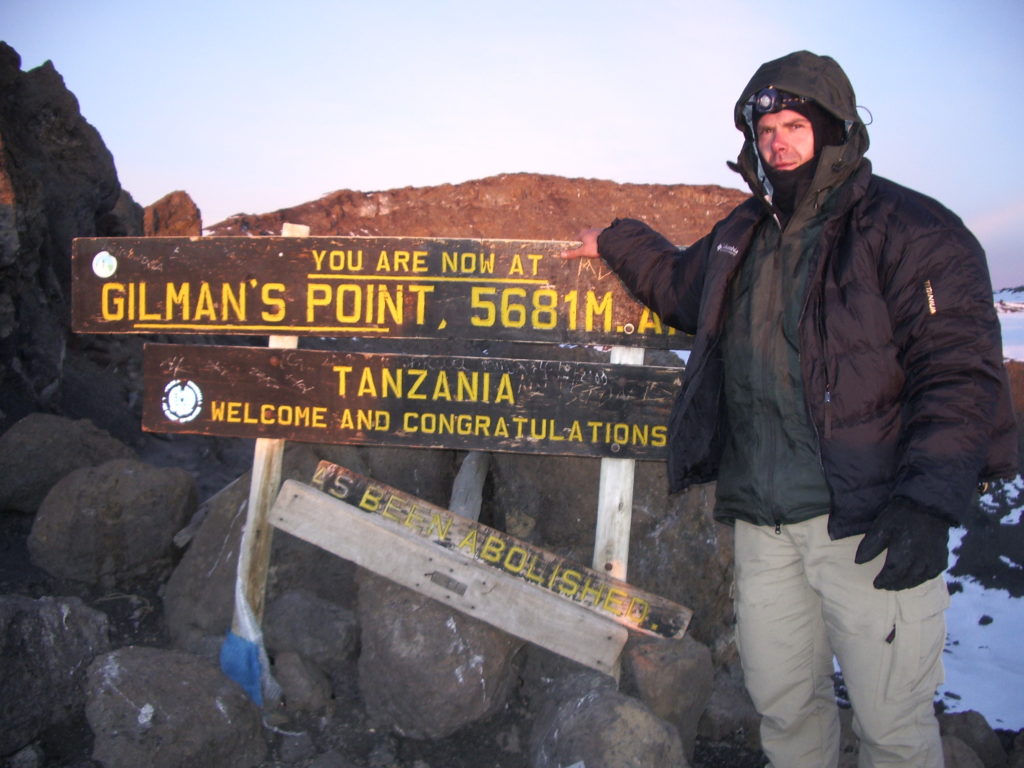 Despite the delays, the climb was a success…sunrise atop the highest mountain in Africa.