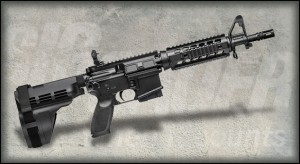 With the ATF recently approving the SIG-designed “arm brace” attachment, AR-15 pistols have become quite popular.  The arm brace was designed for disabled shooters to secure the pistol to their arms, but it also serves as a workable shoulder stock.  This allows people to fire AR-15 pistols from the shoulder…in essence creating a short barreled rifle without all the ATF paperwork.

The 5.56 mm cartridge gets the majority of its stopping power as a result of its high velocity.  The velocity creates a fluid shock wave in the body that causes far more tissue damage than the missile itself.

Unfortunately, velocity is diminished in shorter barrels.  What kind of bullet penetration and expansion can one expect at various ranges with the short barreled pistols?  A neighboring police agency recently set up a ballistic gel test with the assistance of an ATK/Speer representative in order to answer that question.

They shot several different loads through a 7″ barrel Sig AR pistol and a 10.5″ barrel Colt M-4.  The rounds were shot at both 10 yards and 83 yards (maximum distance on the range they were using).  All shots were into calibrated bare gelatin.

As a couple points of explanation, not all of the loads were tested at all ranges or through all guns because the ATK rep only had a limited number of ballistic gel blocks to shoot.  Recovered bullet weights greater than initial weights were the result of bullets picking up bits of the ballistic gel during the expansion process.

I’ll just post the data and leave the judgements up to you.  I was honestly quite surprised at how most of the loads performed.  Most retained full weight, had adequate penetration, and expanded to nearly twice their initial diameters.  You really can’t ask more than that.

The AR-15 pistol in 5.56mm looks to be an adequate performer, even with short barrels and longer than average engagement ranges!